The Escort was revised in January 1995, although it was still based on the previous model. This version had new front lights, bonnet, front wings, front and rear bumpers, wing mirrors, door handles and 4 different front radiator grilles (slats, honeycomb, circles and chrome). The interior of the car was hugely revised too, featuring an all new dashboard arrangement of competitive quality. However, the underlying car was now five years old and most of its rivals were either new or to be imminently replaced.

The two entry level engines were revised - the 1.3 L received the latest version of the Kent/Valencia family - the Endura-E from the recently launched Mk IV Fiesta and Ka, whilst the 1.4L CVH was replaced by the updated CVH-PTE unit. There were no changes to either the venerable 1.8 diesel or the 1.6/1.8 Zetec units at the top end of the range. The improved iB5 version of the venerable BC-series transmission was also later introduced as a running change.

Dynamically, the handling and ride were also much improved with revised suspension set up from that on the previous Mark V / Vb models. The sporty "Si" model had slightly stiffer suspension than the LX and Ghia variants, although the Si was otherwise the same as the LX with some additional standard, mainly cosmetic, enhancements such as front and rear spoilers (which were also available as options on the LX), sports seats and white-faced dashboard instruments.

The RS2000 models ceased production in June 1996, and were the last Escorts ever to wear the famous RS badge. The RS badge did not resurface until the Focus RS arrived in 2002. A new Ghia X model was introduced around 1996, which included air conditioning and a 6 CD autochanger as standard. Although the equipment of the Ghia below it was reduced, it was now more affordable.

The last "standard" model to be introduced in 1997 was the GTi — the only GTi-badged Ford to ever be sold in Europe. This used the same existing 115 PS (85 kW) 1.8 L Zetec-E engine found in other cars in the range, but included a body kit borrowed from the now cancelled RS2000 model, part-leather seats plus the standard fitment of ABS. The GTi was available in 3- and 5-door hatchback and estate bodystyles.

In 1998, Ford announced an all-new car, the Focus, which replaced the Escort and superseded the "Escort" name that had been in use for 30 years. The Escort range was cut down to just "Flight" and "Finesse" editions, and sold for a further two years in parallel with the Focus. All engines except the 1.6 L petrol and 1.8 L turbo diesel were dropped, as were the three-door hatchback, four-door saloon and cabriolet bodystyles (except in mainland Europe, New Zealand, South Africa and South America).

The Flight cost £10,380 and offered electric front windows, a three-speed fan and a cassette player. For an additional £1,000 the Finesse added alloy wheels, air conditioning, a CD player, fog lamps and metallic paint. The more competitive prices managed to keep European Escort sales going until the last one rolled off the Halewood assembly line in July 2000.

The van variant remained in production until 2002 when the new Transit Connect model was introduced. The Escort hatchback and estate were produced in Argentina until 2004, having been sold alongside its successor (the Focus) during the final stages of production. Escort-based light vans had been offered since 1968, although the market sector, always larger in the UK than in continental Europe, dated back beyond the 1950s when successive Ford Anglias had been available with a van variant. After the demise of the Escort, Ford would be represented in this niche by the Turkish assembled Ford Transit Connect.

In Chile, to avoid confusion with the US-market Escort which was being sold alongside it, this generation was sold as the "EuroEscort" for several years. 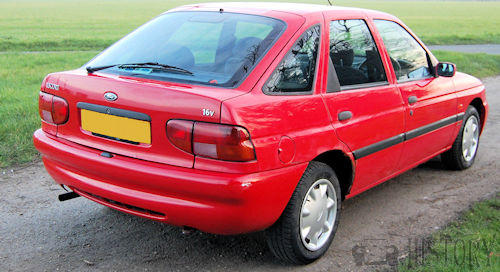