The Escort MkV platform (and Mark III Orion saloon) arrived in September 1990 with an all-new bodyshell and a simplified torsion beam rear suspension (instead of the Mark III's fully independent layout). Initially the 1.3 L HCS, 1.4 L and 1.6 L CVH petrol and 1.8 L diesel units were carried over from the old model.

In 1992 an all new Zetec 16-valve engines were launched bringing improved driveability, while also marking the return of the XR3i which was available with 2 versions of the 1.8 L Zetec engine. The 150 PS (110 kW) RS2000 also appeared in 1991 with a 16v version of the Sierra's I4 2.0 L engine and also improved ride and handling meaning a Mark V Escort finally delivered on the road. Specification, however, were also higher than before. The Escort was now available with items such as power steering, electric windows, central locking, electronic antilock brakes, and air conditioning.

In 1991, Ford also introduced an advertisement for their Mark V model whose music was shrouded in secrecy. To this day, Ford has never revealed the identity of either the artist or title behind the 30-second commercial. The song contained the words "Ask for the impossible and I will show you how you can trust in me", although no songwriter has ever come forward to announce that they penned the piece. 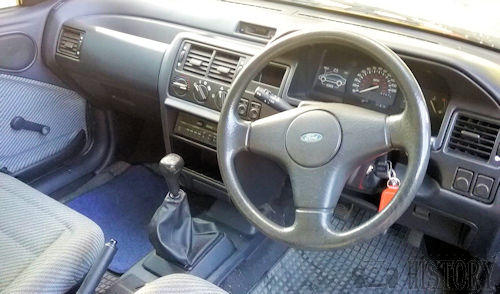 1992 saw the launch of the Escort RS Cosworth. Intended to replace the Sierra Sapphire RS Cosworth as Ford's stalwart rally challenger, it used the turbocharged 2.0 L Cosworth 16-valve engine, generated some 227 PS (167 kW) and was capable of 225 km/h (140 mph), as well as having four-wheel drive. Its most memorable feature was its extremely large "whale-tail" tailgate spoiler.

The 2,500 road-going examples sold (required for homologation purposes) were made, but demand for the car was so high that Ford kept producing them. These have a smaller turbo than the homologation versions and came with the whale-tail spoiler as an option. The Escort Cosworth ceased production in 1996, but it has already achieved classic status and has a huge following. However, the car wasn't really an Escort at all, being based from a Sierra floorpan and mechanics, including its longitudinally mounted engine, and was merely clothed in body panels to resemble a Mark V.

The fifth generation Escort was launched in South America in 1992, being manufactured in Brazil and Argentina by Autolatina, a joint-venture between Volkswagen and Ford. This resulted with the top of the line Escort XR3i being equipped with a VW AP 2.0 L engine generating 115 PS (85 kW). This generation also spawned two VW-branded cars with the same mechanics (but different body styles and interiors) called Pointer (five-door hatchback) and Logus, a two-door saloon.

Stung by the criticism of the original Mark V, Ford facelifted the Escort and Orion in September 1992, giving the revised cars a new grille, bonnet and, in the Escort hatch's case, a new rear end. A new 1.6 L 16-valve 90 bhp (66 kW) Zetec engine was introduced, replacing the previous CVH. Fuel injection was now standard on all petrol models, and Ford introduced a four-wheel-drive variant of the RS2000, offering much improved handling over its front-wheel-drive cousins. A first for the Escort also saw the introduction of all disc brakes on all four wheels as standard on all RS2000 and Xr3i models.

In 1993, the Orion name was quietly dropped, the saloon taking on the Escort badge. The crash structure was also improved, featuring side impact bars, improved crumple zones and later on, airbags. Though it appears airbags became standard much earlier in the UK, as there are L-reg cars with at least a driver's airbag present. These revisions made the Escort and Orion much better cars and they were competitive against rivals, if still not the best in class.

The facelifted Mark V Escort is sometimes referred to in error as the Mark VI, with the Mark VI in turn wrongly being called the Mark VII, which never in fact existed. 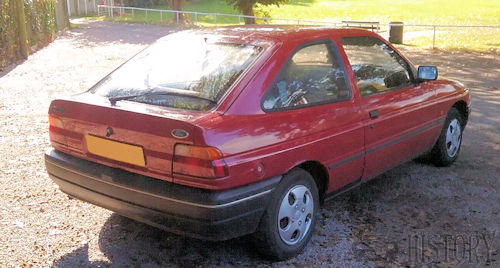