The sixth generation, or Ford Fiesta Mark VIwas shown in concept form as the Ford Verve at the Frankfurt Motor Show in September 2007 and marketed in principal European markets,Australia and the United States. This model is based on Ford's new global B-car platform. The sixth generation is known as Mark VII in the United Kingdom Production started at Ford's Cologne plant in Germany in August 2008. A second plant in Valencia, Spain started production in early 2009. Productions in China, Thailand and Mexico started from late 2008 to 2010.

Fiesta sales for Canada began in June 2010 for model year 2011.The 5-door hatchback will also be sold in Mexico starting 2011.

The sixth generation saloon was launched in India in July 2011 with both petrol and diesel variants.

The Fiesta received a September 2012 facelift with changes to the front, back and the interior.

The Ford Verve concepts are a series of subcompact car concepts from Ford Motor Company which the sixth generation Ford Fiesta (Mark VI-VII) is based upon. Upon its presentation, Ford Verve was intended to meet market demands for smaller, more fuel-efficient cars.The 3-door hatchback and 4-door saloon versions of Fiesta are all based on the Verve, with the 5-door hatchback and the 2-door van being their derivatives. The concept itself was shown at the 2007 Frankfurt Motor Show.

Verve comes in both four- and three-door body styles. The four-door is the basis for the production vehicle that will be sold in North America beginning in 2010. The European three-door is being shown to test market reaction to the body style – as a possible additional small car for the North American market.

Martin Smith, executive director of design for Ford of Europe, described the Verve as "a chic, modern and individualistic statement for a sophisticated, fashion-aware generation." The concept was created by a team of designers from Ford studios in Dunton, England, and Cologne, Germany.

Occupants are cocooned in a cabin trimmed in different hues of glove leather, with an array of modern multimedia conveniences at their fingertips.

On 19 November 2007, Ford unveiled its second Verve concept. This second version took the form of a four-door notchback and was styled similarly to the Frankfurt version of the car. It was finished in frosted grape.

An further four-door Verve concept car for North America was revealed at the North American International Auto Show in January 2008. It was finished in Rouge Red, and unique to this version, featured a modified front fascia. The most notable changes were in a deeper upper grille, with Ford of North America's trademark 'three-bar' graphic, and a downsized lower inverted trapezoidal grille.

The 2008 Fiesta includes Ford's Convers+ menu system, as seen on the Mondeo, S-MAX and Galaxy, and complemented by steering wheel button controls. Ford initially anticipated that over 85% of Fiesta orders would include this multifunction display. Other new equipment includes keyless entry with a 'Ford Power' starter button, reach and rake adjustable steering wheel, electric power steering, and a USB port for portable music players. Ford Easyfuel, the capless refuelling system recently introduced with the Ford Mondeo, will also be a feature, while 'ambient lighting,' casting a soft red glow over the interior, will be an option. For the 2011 US market model, the Ford Sync in-car communications and entertainment system will be available as an option. 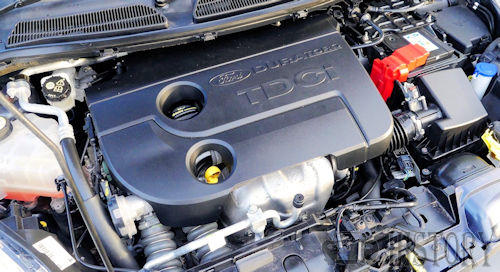 In 2008 Ford revealed details of an ECOnetic model, which Ford stated would emit 98g/km of carbon dioxide. The car was launched in 2009. It uses the 1.6 Duratorq TDCi diesel engine, but with an added diesel particulate filter. The Fiesta ECOnetic achieves its environmental credentials through weight loss and aerodynamic adjustments, and its emission figure exempts the car from UK vehicle excise duty. The ECOnetic gets an estimated fuel consumption of 65 mpg-US (3.6 L/100 km; 78 mpg-imp). When tested on the highway mileage and emissions test schedules, on which hybrids are designed to perform well,the ECOnetic outperforms the Toyota Prius. The model will not be available in the U.S. because, as Business Week noted, the company "doesn't believe it could charge enough to make money on an imported ECOnetic" and doesn't think it would sell enough of the model (350,000/year) to justify the $350 million in upgrades required at their Mexico plant to manufacture it in North America.

In 2011, Ford revealed the Fiesta ST concept based on the Fiesta MK7.The final production model was announced at the Geneva Motor Show in March 2012, and was largely unchanged from the concept model except for the lack of LED headlights.

The Fiesta ST is powered by a 1.6-litre Ford EcoBoost engine to deliver performance while still providing good fuel efficiency. The 1.6-litre Ford EcoBoost Turbocharged engine will feature Twin-independent Variable Camshaft Timing (Ti-VCT) and put out 179 PS (132 kW; 177 hp) with 177 lb·ft (240 N·m) of torque providing an acceleration time of under 7 seconds (0–100 km/h) and a top speed of 136 mph. This engine is mated to a 6-speed manual transmission which features Ford’s Torque Vectoring Control system to brake the inside front wheel to aid agility, and has three ESP modes. The car is expected to provide high fuel economy while not sacrificing performance, with Ford claiming higher fuel economy than the Volkswagen GTI. The ST features a redesigned front fascia similar to the one seen on the Focus ST, a large rear spoiler, aggressive rear diffuser with a dual exhaust system, completed with 17-inch wheels on Bridgestone Potenza tires. On the inside, the ST provides heavily bolstered Recaro front seats (optional in North America) and sportier décor; North American versions will also be offered with the MyFord Touch infotainment system. 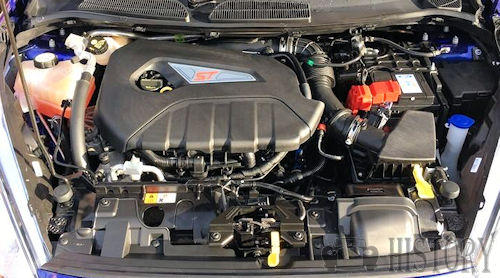 There are 4 body styles, including 3 and 5-door hatchbacks, 4-door saloon, and 2-door van. They are sold separately depending on the country.

5-door hatchback
Sold globally except India.
4-door saloon
Originally available in China and North and South American market, later in other parts of Asia, and then in Australasia.
3-door hatchback
Sold in Europe, Australasia, and small parts of Asia such as Singapore.
3-door van
Sold only in Europe. Uses the same bodyshell as the 3-door, modified with solid panels in place of the rear quarter windows and a flat load floor replacing the rear seat.

Transmission choices include a 5-speed manual or 4-speed automatic. The automatic is only offered with the 1.4 L Duratec. The 2011 North American model offers the Powershift 6-speed dual-clutch as an option in addition to the 5-speed manual, which may be sold with a diesel in Europe in the future.

Thailand is the last plant to start assembling Ford Fiesta for ASEAN countries. However 6-speed 'Powershift' dual clutch transmission will be available as standard transmission for 1.6L Ti-VCT engines in Thailand Curiously, the Thai-made Fiesta versions – both saloon and five-door hatch – feature a 100 mm pitch circle diameter (PCD) wheel lug mount measurement identical to the Mazda2, as opposed to the 108 mm one as found in other global versions , come with 3 lineup when launch ; 1.4 "Style" , 1.6 "Trend" and 1.6 "Sport" , all models featuring ABS , driver airbag , air conditioner , electric windows and mirrors ; 1.6 models featuring front passenger airbag , alloy wheels and stability control across the range ; top of the range "Sport" get voice command system.

Later , the special "Sport+" models with some added features added to lineup , and "Sport Ultimate" with 7 Airbags (Dual front , side , curtain and driver knee) as standard , first time ever in subcompact segment in Thailand , both use 1.6-litre engine with automatic. 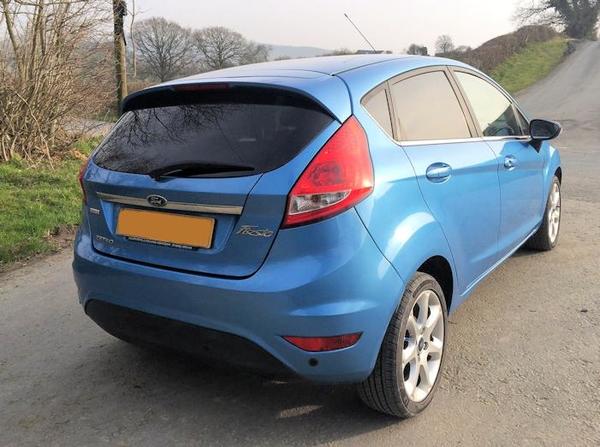