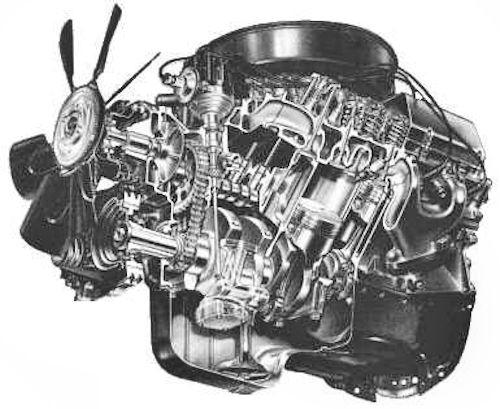 The Ford 385 engine family was the Ford Motor Company's final big block V8 engine design, replacing the Ford MEL engine and gradually superseding the Ford FE engine family. The engine, which got its name from the 3.85 inch crankshaft stroke of the 460 V8, was a departure from previous designs, utilizing thinwall casting methods and a skirtless block to reduce weight.

The engines were sold between 1968 and 1997. It was introduced in the Lincoln Continental (460) and Ford Thunderbird (429) in 1968 and replaced the FE in Ford's full-size cars in 1969. Production ended with the ninth generation Ford F-Series truck in the 1996/7 model year. They were manufactured at Ford's Lima Engine plant at Lima, Ohio. This manufacturing line replaced the Ford MEL engine line in the Lima plant. The FE engines, manufactured in Dearborn, continued in production but saw reduced applications and volume as the 385 engine gradually took over in the Ford line up. The FE went out of production in 1976, leaving the 385 as the only big block. The 370 replaced the 361 FE in 1978 and the 429 replaced the Super Duty (401/477/534) engines in 1982.

Besides service in large luxury cars in the 1970s and in trucks throughout its life, the 385 series engine was also popular in motorhomes, marine, and industrial applications. Over 50 varieties were produced in any given year.

As with the FE line of engines, Ford also offered Cobra Jet, Cobra Jet - RamAir, and Super Cobra Jet versions of the 429. The Cobra Jet, rated at 370 hp (280 kW), was equipped with a Rochester Quadrajet 700 cfm 4 BBL carburetor, larger camshaft, 11.3:1 compression ratio and a special set of cylinder heads. It was available with or without a hood scoop, and came with a 3.25 rear axle ratio. The Cobra Jet - RamAir came with the shaker scoop, which was attached to the engine, and a 3.50 rear axle ratio. The Super Cobra Jet, rated at 375 hp (280 kW), had a four-bolt main block, a Holley 780 cfm 4BBL carburetor, and a larger mechanical camshaft. It was only available with a 3.91 or 4.30 rear axle ratio. In 1971, the CJ engine also used a four-bolt main block. However, these engines were actually derated and produced power in the 440–460 hp range. This was done to deceive insurance companies (common practice in that era), so that buyers did not have to pay higher insurance rates.

Ford also offered police versions of the 429 and 460. Horsepower ratings for the police version ranged anywhere from 240-375 hp (gross hp, the common hp rating of the era). The 1971 429 police interceptor, with 11:1 compression (which is a very slightly more powerful version of the 429 Cobra Jet) rated at 375 hp.

From 1973 to 1978 Ford offered two versions of the 460 police engine. The 460 Police Cruiser (460 PC), identified by engine code "A" in the installed vehicle's vehicle VIN number and the engine's valve cover spec sticker, and the 460 Police Interceptor (460 PI) identified by the engine code "C" in its vehicle VIN number and on its spec sticker. The two were commonly confused with each other, the "A" code 460 being a basic, street/production stock flowing engine with additional cooling bolt-ons and a block-mounted non-electric fuel pump. The more powerful "C" code 460 Police Interceptor, with its higher lift camshaft and better flowing heads and exhaust, and high flow in-tank electric fuel pump, as the stock, block-mounted, manual vacuum lift fuel pump would starve the motor for fuel above 100 mph.

The basic "A" 460 PC was recommended for city and suburban use, while the "C" 460 PI was built for high speed highway patrol and interstate applications. The Ford 460 PI motor was also the biggest motor used by police agencies, followed by GM/Pontiac's 455 Police Enforcer, Chevy's 454 Police Apprehender, and Chrysler/Dodge's 440 Police Pursuit versions.

Starting in 1968 gross horsepower and torque ratings began to fall as Ford responded to newly introduced federal air pollution regulations. In the 1972 model year the 385 series of engines, along with virtually every other Ford production engine, saw an additional significant dropoff in HP and torque ratings when federal mandates requiring automakers to list SAE net horsepower (which takes into account the power reduction of accessories and exhaust system) rather than gross came into effect. The 1971 460 which was rated at 365 gross HP, dropped to as low as 208 net HP in 1972. Ford redesigned the 385 engine's cylinder heads (resulting in a drastically lower compression ratio or 8.5:1), and retarded the camshaft timing eight degrees, among other power sapping, but smog reducing modifications. 1973 saw the release of an improved cylinder head design, bringing the 429 and 460 back into the 225 net HP range.

The 460 was phased out for use in passenger cars in the late 1970s, with 1978 being the final model year for the Ford LTD, Mercury Marquis and Lincoln Continental. However it continued to be produced with minimal modifications in trucks, RVs, Boats, and as a replacement "crate engine" available through Ford Motorsports until its production finally ceased in 1997. The 460 is known as a good heavy duty towing, marine and motorsports engine. These 460s actually had higher horsepower and torque ratings than the IDI 6.9 liter and later 7.3 IDI diesel engines, though fuel economy was significantly better with the diesel. The 460 began using fuel injection in 1988, leading to a slight increase in horsepower and torque ratings. For 1993 and up 460s saw an improved cylinder head design that further improved power. While perhaps best known for its poor gas mileage, the later 460 is considered by most to be a reliable, long-lasting, heavy-duty, and powerful engine for towing and hauling purposes, as well as a good starting point for engine builders building dragsters. Due to its mass production and relatively minimal changes during its 30-year production run, parts are generally cheap and easy to find for the 385 series engines.