Boss is the internal name for a family of large-displacement V8 engines from Ford Motor Company intended to compete with Chrysler Hemi engines and General Motors' 6.2-L Vortec engines. Originally, Ford developed the engine architecture under the name Hurricane; however, development of the engine was delayed due to its temporary cancellation in 2005. It was revived in early 2006 by Mark Fields and was given the new name of Boss in light of the devastation caused by Hurricane Katrina in 2005. In spite of this change, Ford has yet to officially market the engines with the Boss name in any production vehicle where they are to be used, instead referring to the engines by their displacement.

Ford Australia and Ford Performance Vehicles used the "Boss" name for V8 engines from 2002, but these are variations of the Ford Modular V8 with locally produced parts.

The 6.2 L (379 cu in) V8 is the main variant of the Boss engine. The V8 shares design similarities with the modular engine family such as a deep-skirt block with cross-bolted main caps, crankshaft-driven gerotor oil pump, overhead cam valve train arrangement, and bellhousing bolt pattern. In particular, the 6.2-L features a two-valve per cylinder SOHC valve train with roller-rocker shafts and two spark plugs per cylinder, as well as dual-equal variable cam timing. While notable that they use a much wider 4.53 in (115 mm) bore spacing (compared to the Modular's 3.937 in (100.0 mm)), allowing for the use of larger bore diameters and valves.

The 6.2-L V8 has a bore diameter of 4.0150 in (101.98 mm) with a 3.740 in (95.0 mm) stroke. It has lightweight aluminum cylinder heads and pistons, but makes use of a cast-iron cylinder block for extra durability since most applications for the engine will be trucks. 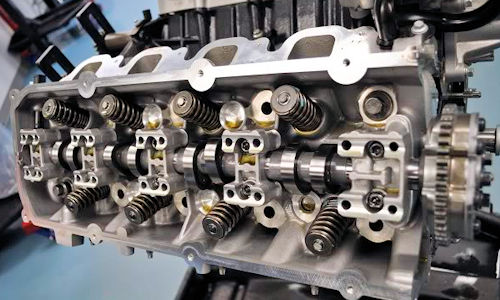 This V8 went into production in early 2010 and debuted in the 2010 Ford F-150 SVT Raptor as a late-availability option. A limited-edition version of the Raptor from Ford Racing called the Raptor XT features a high-output version of the 6.2-L V8 with about 500 horsepower (370 kW).

For the 2011 model year, the 6.2-L V8 was introduced in Ford's Super Duty pickups as a replacement for both the 5.4-L Triton V8 and the 6.8-L Triton V10, and in the F-150 as the premium engine option, though it is not available in all configurations. 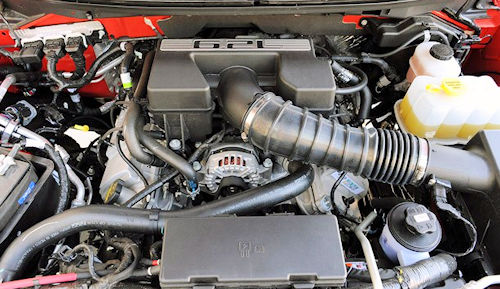