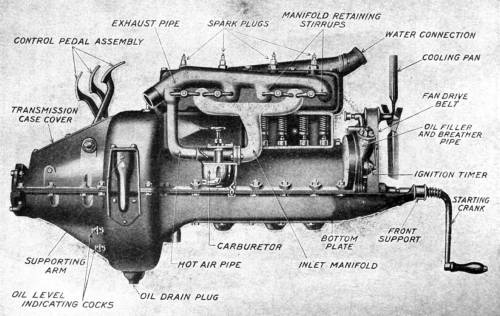 The Ford Model T used a 177 cu in (2.90 L) inline 4-cylinder engine. It was primarily a petrol engine, but it had multifuel ability and could also burn kerosene or ethanol. It produced 20 hp (15 kW) for a top speed of 45 mph (72 km/h). It was built in-unit with the Model T's novel transmission (a planetary design), sharing the same lubricating oil.

The T engine was known for its simplicity, reliability, and economy. The engine remained in production for many years, and millions of units were produced. The engine design's lifespan exceeded that of the Model T vehicle itself, with industrial, marine, and military applications extending its production run. The T engine is on the Ward's 10 Best Engines of the 20th Century list.

Design changes over the years

The following major changes were made (listed by year):

1909 — First model year - Water pump was discontinued; subsequent Model T engines used thermosyphoning to circulate the coolant.
1911 — Valve covers were added
1917 — Higher head with larger water jacket
1919 — Engine starter introduced as an option
1920 — Lighter-weight rods and pistons
1922 — The cylinder casting was changed so a single valve cover could be used
1926 — An extra boss was added at the rear for two additional bolts stiffening the transmission,
1927 — The carburetor throttle rod was re-routed over the engine
Fuel choices and fuel economy

The T engine was primarily a petrol engine, but it had multifuel ability and could also burn kerosene or ethanol. According to Ford Motor Company, the Model T had fuel economy on the order of 13–21 mpg-US (16–25 mpg-imp; 18–11 L/100 km

The T engine had one carburetor, a side-draft, single-venturi unit. Its choke and throttle valves were controlled manually; the latter was with a hand lever rather than a foot pedal. The carburetor had no accelerator pump. Various vendors supplied Ford with carburetors for the T engine, including Holley, Zenith, and Kingston.

During most of the T's production run, its 10 US gal (38 l; 8 imp gal) fuel tank was mounted to the frame beneath the front seat. Because Ford relied on gravity to feed fuel to the carburetor rather than a fuel pump, a Model T could not climb a steep hill when the fuel level was low. The immediate solution was to climb steep hills in reverse. In 1926, the fuel tank was moved forward and upward, under the cowl, on most models, which improved the gravity feed.

The T engine was an inline-four, with all four cylinders cast into one engine block. Such monobloc design was an uncommon practice when T production started in 1908. It lent itself to mass production, showing the Ford company's prescient focus on design for manufacturability. The head, however, was detachable, which not only aided Ford in manufacturing but also made valve jobs (cleaning, grinding, or replacement of the poppet valves) easier. The block and head were both of cast iron.

The engine's bore was 3 3⁄4 inches (95.25 mm) and its stroke was 4 inches (101.6 mm) even, for a total displacement of 177 cu in (2,900 cc). The compression ratio was low by modern standards, but typical for the era, making the engine forgiving of poor fuel quality and minimizing cranking effort at starting.

The valvetrain was a side valve (flathead) design.

The crankshaft had 3 main bearings.

The T engine's cooling system reflected the T's simplicity design theme. The first few hundred Model Ts had a water pump, but it was eliminated early in production. Instead, Ford opted for a cheaper and more reliable thermosyphon system. Thermosyphon was a common engine-cooling method of the era. Hot water, being less dense, would rise to the top of the engine and up into the top of the radiator, descending to the bottom as it cooled, and back into the engine. (This was the direction of water flow in most cars which did have water pumps, until the introduction of crossflow radiator designs.) The thermosiphon system was susceptible to overheating if worked heavily, but served well for most Model T usage.

Many types of water pumps were available as aftermarket accessories.

The Model T engine's ignition system used a flywheel-mounted magneto to produce the current necessary to produce a spark to initiate combustion. This current was distributed by the timer (analogous to a distributor in a modern vehicle) to one of the four trembler coils, one for each cylinder. The coil stepped up the voltage and discharged it to the spark plug in the cylinder. Ignition timing was adjusted manually by using the spark advance lever mounted on the steering column, which rotated the timer, advancing or retarding the ignition timing. A battery could be used for starting current: at hand-cranking speed, the magneto did not always produce sufficient current. A starting battery was not standard equipment until sometime in 1926, though all T's had a "BAT" position ("battery") on the coil box switch. A certain amount of skill and experience was required to find the optimal spark timing for any speed and load.The ignition system of the Fordson tractor was similar to the Model T's .Starting, lights, and electrical system beyond ignition 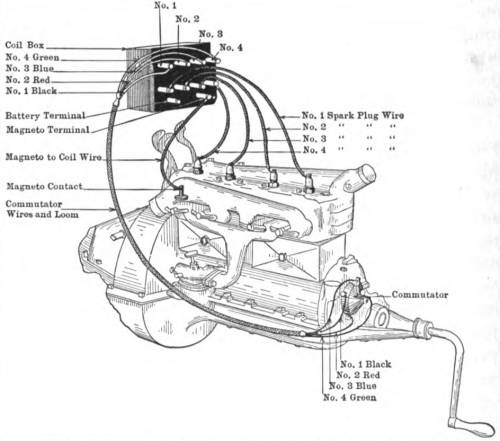 When electric headlights were introduced in 1915, the magneto was upgraded to supply enough power for the lights and horn. In the early years of Model T production, all Ts were started with a hand crank. Most cars sold after 1919 were equipped with an electric starter, which was engaged by a small round foot-operated button switch on the floor. In keeping with the goal of ultimate reliability and simplicity, the trembler coil and magneto ignition system was retained even after the car became equipped with a generator and larger battery for electric starting and lighting.

Operating the T engine was not difficult after some experience, although the learning curve was longer than today's. The various manual control tasks (such as manual choke and spark advance) and the method of use (such as hand throttle) were typical for automobiles of the era, although they might seem more like farm tractor operation to most automobile drivers of today.

Before starting a Model T with the hand crank, the spark had to be manually retarded or the engine might "kick back". The crank handle was cupped in the palm, with the thumb tucked under the handle (not clasped over top of it), so that if the engine did kick back, the rapid reverse motion of the crank would throw the hand away from the handle, rather than violently twisting the wrist or breaking the thumb. Most Model T Fords had the choke operated by a wire emerging from the bottom of the radiator where it could be operated with the left hand. This was used to prime the engine while cranking the engine slowly; then the engine was started with a rapid pull of the crank handle. In good tune, an already-primed T engine only has to be cranked half a turn for it to successfully start.

The T's planetary transmission is famous for its differences from what later became the norm for car transmission operation. The 3 foot pedals are not used in the way later cars use their pedals. Operation is not difficult but requires "unlearning" habits used with later vehicles.

The T engine was produced continuously from September 27, 1908, through August 4, 1941, exactly 12,000 days. This makes it one of the longest engines in series production, especially considering that the specifications remained mostly unchanged for this entire duration. Its production run for the U.S. consumer market for passenger cars and pickups was shorter, being the 19 years' production run of the Model T itself for that market (1908 to 1927). But the engine continued to be produced and sold to various consumer, industrial, military, and marine markets throughout the world until 1941.