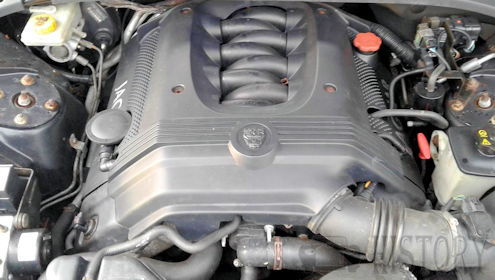 The Jaguar AJ-V8 is a compact DOHC - V8 - petrol engine , the automotive brands Jaguar , Land Rover and Lincoln (Ford) is used. The AJ-V8 is only the fourth Jaguar-developed engine generation.

The AJ-V8 engine replaced the in- line six-cylinder AJ6 (AJ16) and the V12 in all Jaguar vehicles from 1997. Later, more engine variants were used. It was built in the various series at Jaguar like the XJ8, the XK8 (X100) , later the XK (X150) , the S-Type and the F-Type. Furthermore, it was and is available in various Land Rover versions, the Lincoln LS and the Ford Thunderbird,and the Aston Martin V8 Vantage.

The AJ-V8 is manufactured in Bridgend . However, a version is built in Cologne and has been used exclusively since 2003 in the Aston Martin. It has hardly any parts in common with the original Jaguar engine. In Bridgend 3.5 to 5.0L V8 are built based on the AJ-V8. The Jaguar department is housed as a separate department in the Ford engine plan

The Jaguar AJ-8 is a compact DOHC V8 piston engine used in many Jaguar vehicles. It was the fourth new engine type in the history of the company. In 1997 it replaced both designs previously available on Jaguar cars: the straight-6 Jaguar AJ6 engine (or rather its AJ16 variant), and the Jaguar V12 engine. It remained the only engine type available on Jaguar until 1999 with the launch of the S-Type, when the Jaguar AJ-V6 enginewas added to the list. The AJ-V8 is available in displacements ranging from 3.2 L to 5.0 L, and a superchargedversion is also produced.

The AJ-V8 was designed to use Nikasil-coated cylinders rather than the more-common iron cylinder liners. However, like the BMW M60, high-sulphur fuel reacted with the Nikasil liners and caused engine failures. Jaguar replaced affected engines, and has used conventional cast-iron linings ever since.

The engine originally used a two-state Variable Valve Timing system to switch the intake cam timing by 30°. Newer variants use a more sophisticated system which can vary intake timing incrementally up to 48°. The Lincoln version was made in the United States.

When Jaguar was still part of the British Leyland Group, they wanted to persuade the Jaguar management to use the Rover -V8 instead of the V12, which was seen by Jaguar as an attack on sovereignty. The Rover V8, which was based on a Buick engine, was considered little cultivated. As a result, the body of the XJ40 sedan was designed from the outset so that the Rover V8 would have fit under any circumstances.

Jaguar's 6-cylinder AJ6 and AJ16 had a very good refinement and made little less than the V12. The V12 was more prestigious, but a very large unit that needed a lot of space.

Future developments should go in the direction of a shorter motor to extend the crumple zone to create safety reserves. Furthermore, the cylinder head design should allow a quick reach of the operating temperature, to increase comfort, but also to reduce pollutant emissions. Likewise, the efficiency should be increased and friction losses reduced in order to better control fleet consumption and emission levels.

With these above specifications, some alternatives were explored, including a V6 - as a "truncated" V12, which should compensate for the power loss with two turbochargers, a two-strokeV6 engine, which should have the same smoothness of the V12, since it has the same number of ignitions per engine revolution. Under the internal code "AJ12" a single-cylinder engine was built to test different options for combustion chamber, intake and exhaust and camshaft options. The data showed that a cylinder volume of 500 cc with 26 ° inclined inlet and outlet ports and four valves provided the best result in terms of efficiency and performance. However, these findings were not immediately incorporated into the construction of the AJ12, but the data was used to study several configurations based on a modular engine design: especially a four-liter eight-cylinder, a three-liter V six-cylinder, but also a two-liter inline four-cylinder , a five-liter V10 and finally a six-liter V12. However, the data collected clearly showed that one should focus on V6, V8 and V12 engines. This project has now been officially named AJ26 (6 + 8 + 12 = 26)

Chief developer Dave Szczupak and his team had put in the Jaguar development center in Whitley a lot of development work in the V8 engine to build an engine that was also perceived by potential customers as a Jaguar engine, because the V12 and the Reihensechser AJ6 ( AJ26) were considered very cultivated and smooth. Jaguar was then independent and financially unable to invest large sums of money in development. Ford bought Jaguar in 1990, which brought drastic changes in development and manufacturing.For the further development history of the AJ-V8 two different versions are rumored.

Version 1.Ford looked at the previous development data of the AJ-V8, was so impressed and gave Jaguar the funds needed to make the development to production maturity, only with the requirement to be limited to the V8.

Version 2.Ford wanted to persuade the Jaguar management to stop all attempts to develop its own engines. One should make use of engines from the group in the future. Jaguar, however, was given a budget to develop variable camshaft timing (VVT) for the newly-developed Ford V8 to cultivate the engine. Jaguar probably took the money, but continued to work on the AJ-V8 and then sent the engine, much to the displeasure of the Ford Group, the development center in Dearborn , where it was tested against the Ford V8. The Jaguar engine performed much better in power, smoothness and torque than the group brother. Jaguar was then commissioned to develop a slimmed-down version for the Lincoln LS. Ford's own V8 was now installed in commercial vehicles.

From the AJ26 there were further developments. In the following, the variable camshaft control was further developed and built various versions with displacements from 3.2 to 5.0 liters with alternative oil sump. All version designations (AJ26, AJ27, etc) are communicated under the engine types "AJ-V8" summarized by Jaguar. Often, the AJ-V8 is also operated in a compressor variant with a screw compressor from Eaton and a water-cooled intercooler.

The current AJ-V8 Gen III 5.0-liter gasoline engine produces 283 kW (385 hp) as a naturally aspirated direct injection engine. Fuel consumption in the combined cycle is 11.4 liters / 100 km and CO 2 emissions are 269 g / km. This was achieved by a complete re-engineering , but also by a very high pressure working direct injection. Both versions (naturally aspirated and supercharged version) of the AJ-V8 Gen III meet the EU5 and US ULEV emission standards .
Chain tensioner problem. Earlier versions of the AJ V8 were prone to increased wear on the chain drive and premature failure of the plastic chain tensioner. As of August 13, 2001, metal chain tensioners were installed in all engines. Engines from the serial number 0108140000 basically have metal chain tensioners, which are considered durable and unproblematic.

The supercharged version of the AJ26 is used in the high-performance R versions of Jaguar's cars. The engine was updated with AJ27 specifications for 2000. It produces 375 hp (280 kW) and 387 lb⋅ft (525 N⋅m) with the help of an Eaton supercharger (modified roots-blower). The supercharged engine did not use variable cam timing as the normal benefits of improved volumetric efficiency are not noticeable on a boosted engine

Vehicles using the supercharged version include:

The 3.9L (3934 cc) AJ30/AJ35 variant is a unique displacement used only by Ford and Lincoln and is built in Ford's Lima, OH engine plant. Bore is 86 mm (3.4 in) and stroke is 85 mm (3.3 in). The AJ35 version introduced for the 2003 model year added variable valve timing of the intake camshafts and electronic throttle control. While the block, crankshaft, pistons, and connecting rods are all unique to this displacement, many other parts are shared with the AJ-V8 engines produced in the UK by Jaguar. 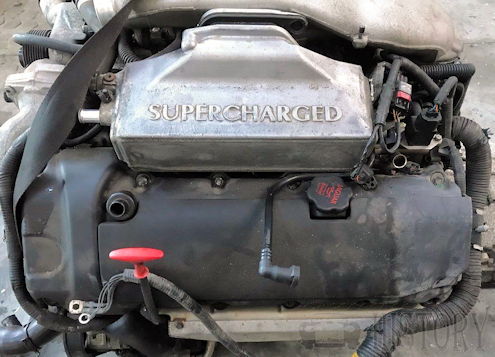