Valmet Automotive until 1995 as Saab-Valmet is a Finnish contract manufacturer in the automotive sector, which has been producing vehicles for the Mercedes-Benz since 2013 for Daimler AG .

The company was founded in 1968 under the name Saab-Valmet in Uusikaupunki , Finland , as a joint venture between the Finnish Valmet and the Swedish Saab-Scania AB . The goal was to develop automotive know-how in Finland, build a supplier network and create new jobs. The first vehicle, a Saab 96 , was delivered on November 13, 1969. In 1992, Valmet became the sole owner. In 1995, the company was renamed Valmet Automotive. Following the merger of Rauma and Valmet in 1999, Metso Corporation became the owner of Valmet Automotive.

The automotive sector is not one of Metso's core businesses. Due to the positive development opportunities of this sector, Metso therefore decided to get external investors on board. Together with the Finnish affiliates Pontos Groupand Suomen Teollisuussijoitus (Finland's Industrial Holdings ), the company's capital base has been strengthened. Both financial investors each invested ten million euros in Valmet Automotive and thus received a total of 34 percent of the shares of Valmet Automotive.

When the automobile plant started production in Uusikaupunki in 1969, the primary objective was to manufacture Saab vehicles for the Finnish market. The high quality and flexibility of production also opened the doors to the export markets.

After the end of production of the Saab 96 was foreseeable, the Talbot Horizon was taken in 1979 as a successor in production. The vehicle was further developed by Saab-Valmet with parts developed in Finland. Thus, the vehicle was well suited for the extreme Finnish conditions. The Saab-Valmet Horizon was sold through Saab sales in Finland. The success of the Horizon led to the fact that the models Talbot 1510 and Talbot Solara could be produced after the same specifications a little later . A total of 31,978 Talbot vehicles were produced from 1979 to 1985.

The Saab Finlandia developed by Saab-Valmet led to the also exported Saab 900 CD. Through the experience acquired on the 900 CD, the company received the development and production contract for the Saab 900 Cabriolet.

The cooperation between Valmet Automotive and Daimler AG will be continued with the production of the new generation Mercedes-Benz A-Class (W177) at the Uusikaupunki plant. The start of production is scheduled for 2018. 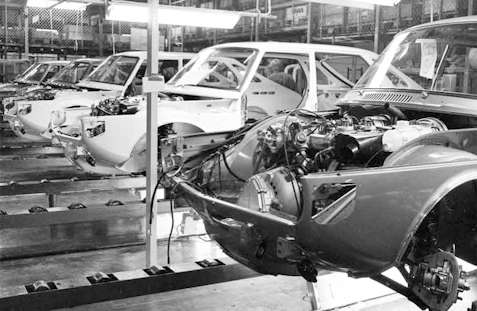 Toroidion (2015-) 6 / 7 Vanajan (1943-1971)
Send
Print
More information on
Valmet Automotive until 1995 as Saab-Valmet is a Finnish contract manufacturer in the automotive sector, which has been producing vehicles for the Mercedes-Benz since 2013 for Daimler AG .