The Fiat Turbina is a car developed by the Italian car manufacturer FIAT in 1954 and exhibited at the Turin motor show .

Fiat was the first European car manufacturer to build a car powered by a gas turbine . The concept car is the end result of a project that had begun in the year 1948 , and this prototype was tested for the first time on 4 April 1954 on the Lingotto track . The engine consists of a two-stage compressor, a two-stage turbine, a one-stage drive turbine and a gearbox unit for transmission to the wheels of around 1000 kg. the declared maximum speed is around 250 km / h, the car body was characterized by two rear stabilizer fins forming part of a completely removable rear section which enclosed the propeller housed in a soundproof compartment.

The excellent aerodynamic study allowed the car to have a C x of 0.14. The frame consisted of tubular elements, the suspensions (the front ones derived from those of the 1952 Fiat 8V) had 4 independent wheels, and the gearbox was replaced by the operation of the turbine which was similar to a hydraulic converter. The transmission was equipped with a reducer that brought the 22000 rpm at maximum speed to about 4000 at the differential.

The front lighting system was characterized by headlights incorporated in the body of the car, which when addressed were directed towards the road (a solution also adopted by Bertone for the second car of the Alfa Romeo BAT family also exhibited at the Turin auto show same year). After the exhibition, the project was shelved for technical production reasons. 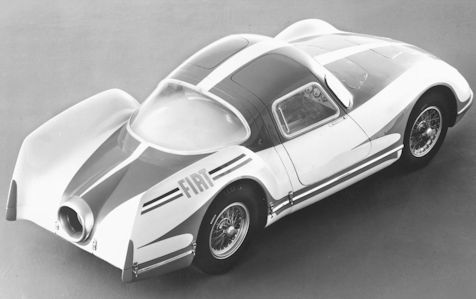