On December 22nd 1972 the Fiat X1 / 9, already in production for several weeks, was officially presented to the international press in the Parco delle Madonie , on the Targa Florio track , simultaneously with the Fiat 124 Abarth Rally . Using the mechanics of the Fiat 128 Coupé that was moved to the rear (the X1 / 9 had, in fact, a central engine and rear-wheel drive , while the 128 had an engine and front- wheel drive ), the small plate was fitted with a robust central roll bar , and a rigid roof removable and can be inserted in the front bonnet.

The derivation 128 was evident in the mechanics: independent wheel suspensions , four- disc braking system (rear groups similar to those of the Fiat 124 Sport) and a 12-cylinder 1290 cm³ transverse-  engine with 75 hp (the same as the 128 Rally 1300 until this remained in production, then adopting that of the Sport Coupé 1300). The chassis was derived directly from the "cousin" Lancia Stratos , always the result of the pencil of Marcello Gandini (the designer of Bertone in the 1970s), and with whom he already shared some body parts .In the Fiat price list, the new-born X1 / 9 took the place of the 850 Sport Spider , renouncing, according to the convictions of the time, a spider body for safety reasons .

The X1 / 9 was exported to the United States both with a 1290 cm³ engine and in the version that will be born a few years later with an oversized engine at 1498 cm³, injection fueled , equipped with anti-pollution devices required by US regulations and instrumentation with Anglo-Saxon measurements getting good sales success. 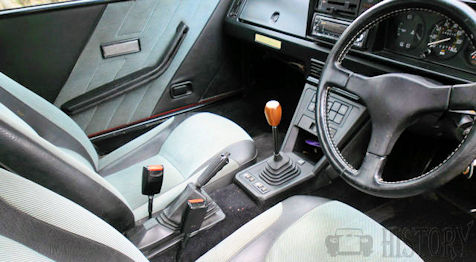 In 1978 the first and only restyling of his long career (18 years) with version Five Speed , adoption of gearbox 5-speed. Aesthetically the car was "Americanized" with the adoption of massive aluminum energy-absorbing bumpers , as required by the US laws of the time; the engine hood also underwent a striking modification to house the new engine. The interiors were completely redesigned, with new adjustable ergonomic seats and a newly designed dashboard. The engine displacement grows to 1498 cm³ (85 hp), while the gearbox becomes 5-speed. The maximum speed reaches 185 km / h with acceleration from 0 to 100 km / h in 10 seconds.

Starting from 1982 the production, now almost entirely absorbed by the United States, also saw a formal rebadging from FIAT to Bertone, the latter the brand where the car was produced from the beginning.In the Bertone years the X1 / 9 was built in a series of special versions also with two-tone bodywork and luxurious interiors, such as the 1982 In which featured red leather interiors ; for the frames, contrary to the production of the FIAT era, anticorrosive treatments with special 9-layer paints were adopted.

Production ceased in 1989 with the Gran Finale version : some variations like the new alloy wheels and a small spoiler in the rear; cars equipped with micalised paint. The X1 / 9, the only one in the FIAT mid-engine history, remained the last two-seater and open-top car presented by the Turin brand until the arrival of the Barchetta .In total the production from 1972 to 1989 was about 170,000 copies.

The first version of the Icsunonove featured a 1300 engine developed with a 16v head and 192 hp Kugelfischer mechanical injection , followed by a 1600 cm³ version with over 200 hp. Aesthetically, it was characterized by widened wheel arches for mounting larger wheels, a rear wing and a front without concealed headlights.

In the early 1970s Gino Macaluso , navigator in the FIAT racing department, was commissioned by the same to follow the development of the X1 / 9 Abarth. Designed in 1974 to run the rallies championship , it was equipped with the engine of the Fiat 124 Abarth Rally (of which the X1 / 9 should have been the heir) of 1,840 cm³, powered by two double-body carburettors and with 4-valve distribution for cylinder, for a maximum power of 200 horsepower at 7,600 rpm and transmission with five-speed gearbox with front and differential clutchesself-locking. The car, weighing only 750 kg, was characterized by sophisticated aerodynamics, air intakes on the front bonnet, and periscope on the central engine, fixed rectangular front headlights, additional round lights and Cromodora alloy wheels.

Weighing only 750 kg, the X1 / 9 prototype was lighter than the Fiat 124 Sport Spider and also the future Fiat 131 Abarth Rallywhich would have reached 950 kg. For its maneuverability, the X1 / 9 had impressed the pilots who drove it, judging it easier than even the plurivictory Lancia Stratoswhich in turn shared an almost equal architecture, but a very different behavior. At the time the design program was stopped, the idea of ​​equipping the small plate with a turbocharged engine was also aired, but it did not go beyond a draft.

Despite the encouraging premises, this car had a brief career in competitions, which started with the unfortunate debut at the Rally of Sicily and the Rally of the four Regions, where it was forced to retire, followed by three absolute victories at the Eastern Alps Rally, at 100,000 Trabucchi and the Liburna Cup. However, the development of the project was interrupted to make way for the Fiat «X1 / 20» project, which will become the Lancia Beta Montecarlo , and the future 131 Abarth Rally.