After World War II FIAT was governed by Vittorio Valletta , who was entrusted with the task of powering the new republican Italy , as had already been attempted and partially achieved through the " Topolino " model . If in the thirties the "Topolino" project had been poorly innovative, in the fifties it was surely surpassed. Valletta commissioned Dante Giacosa to build the new car; a daunting task as the company had very modest potential.

The "600", born as a popular car,  , and, after a few months, the waiting time for delivery will exceed the year . Strategic ingredients of success were the competitive price,the winning weapon was also the low management cost: 14 km with a liter of fuel.Contrary to what has sometimes been thought, the 600 was not simply the result of an intervention to remedy the delays in the presentation of the next 500 , but a reasoned project, the result of a long study and various alternative projects, started as early as the end of the war in 1945 when it was submitted to FIAT (shareholder of SIMCA ) a project supported by the French government of car with aluminum frame and front wheel drive .

Certainly certain daring experiments at the turn of the war were left aside when the design of this car was outlined.After the launch of the " 1400 " and the "103" was presented in 1949 and 1951.The stylistic-dimensional setting of the car was defined in 1951, but the problem of the engine was posed: initially a 150 ° two-cylinder V engine was studied combined with a semiautomatic gearbox, like that of Cisitalia. The interesting solution was discarded because it would have taken a very long time to develop, while the aging of the 500C was now evident.For its part, the FIAT management was pressing for the immediate production of an economic model that could replace the now obsolete "Topolino". Maximum experimentation was required with minimum spending. The choice of rounded shapes was instead made to save sheet metal (and weight).A relatively conventional 4- cylinder vertical water-cooled powerplant was designed .

It was the beginning of 1953 and the definitive experimentation could start. The morphology of the engine of the first 600, with the necessary upgrades and increases in displacement, will be recognizable to an expert eye in the engine of many future models. His proverbial rationality, robustness, reliability and parsimony will make it one of the best ever designed at Mirafiori. Based on the old " 100"(633 cm³) and" 100D "(767 cm³), the engines of the 850 .The engine, project “100” , with 633  c m³ presented great innovations such as the intake manifold integrated in the fusion of the head (great economic advantage) and for the first time for FIAT the monoblock base . It was a type of engine that had a very long life, suffice it to say that with developed displacements it will remain used until 1999 , after the production had been moved to Poland .

The transverse leaf spring suspension would have been used on the rear still by the 127 and 128 almost thirty years later, with the advantage of having the elastic element also acting as an anti-roll bar .Risky but effective was the solution of the radiator placed in the rear with the fan keyed on the water pump (an integration of function, evidently designed to reduce costs).The fan worked pushing the air against the direction of travel (from the back towards the front) but this did not create insurmountable problems, thanks also to the adoption of a rubber conveyor adhering to the radiator. The design ended in mid-1954 and the Mirafiori workshops were set up , where the car will be produced until the end of the sixties . 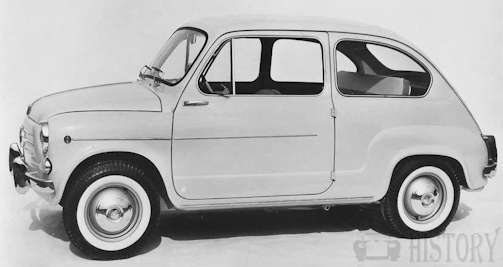 From 1958 to 1960 the Fiat 600 was imported into Argentina , to then be produced by the local "Fiat Someca SA" first in Caseros ( Buenos Aires ) and then in El Palomar (now factories of the PSA group ). Initially, components from Italy were used, later "nationalized" components (starting with the engines produced in Córdoba ).On April 7th 1960 the first Fiat 600 Argentina to come out of the brand new local Fiat factory .

In 1962 it was replaced by the 600D which in 1964 had some mechanical and aesthetic improvements.In 1965 , the company Fiat Someca SA transformed into "Fiat Concord SA", the 600E was introduced , with the doors with conventional opening.In 1970 , at the end of production in Italy, the 600R model was launched with some improvements and a fake front radiator grille.In 1977 , finally, it was adopted an engine of 843 cc and 32 hp (23.6 kW) similar to that of the Fiat 133 . Production will end in 1982, with a production of more than 302,000 units. In 1980, Fiat Concord was merged into Sevel Argentina, a joint venture established by Fiat with the PSA group.

During the years of production of the original model and even later, it was also produced under license in various European countries, above all in Spain by SEAT under the name of SEAT 600 (814 926 units).

After the production in Italy, in 1970, SEAT also adopted the conventional opening of doors today with the 600E version (in fact the same as the Italian 600D). This version was the one most exported to Latin America ( Mexico and Colombia especially, it was also manufactured in Argentina by Fiat Concord, and in Africa).In October 1972 the latest version, the 600L, was released. Small improvements were made and the engine power was increased from 29 to 32.5 hp. On 3 August 1973, the last unit left the Barcelona Zona Franca factory.

Between 1961 and 1967 it was built for SEAT, first by the Italian SIATA  , then by the Carrozzeria "Talleres Costa", a van version (with two side doors) called "Formichetta"; just under 10,000 were manufactured.Also from the "Talleres Costa" workshops a very original version, the SEAT 800, was released between 1964 and 1967, in 17 577 units . Elongated by 18 cm, it was equipped with four doors, the two rear ones with conventional opening, and approved for 5 seats.

The Fiat 750 model Zastava was also produced in Colombia between 1977 and 1979, at the Compañia Colombiana Automotriz of Bogotà .

Between 1960 and 1969 the models ZАЗ-965 and ЗАЗ-965А (Zaz-965 and Zaz-965A) were produced by ZAZ, the front of which reproduced that of the Fiat 600, also borrowing the "all back" technical arrangement. The affinities, however, stop here, given that the type of engine is different and many mechanical differences for suspension and directional and braking systems. Some sources assume that this model derived from a demonstration prototype " 350 Vetturetta " made by FIOM in 1952, on a FIAT project, while others argue that the ZAZ engineers in charge of the design were ordered by the Soviet Government to take the Fiat 600 as a model.

The Fiat 600 between 1956 and 1967 was also manufactured in Germany at the Fiat Neckar , the German subsidiary of the Fiat group born from the previous Fiat NSU.

The mechanics and parts of the bodywork of the "600" were used by many bodybuilders and preparers to make special versions , characterized by slight or important aesthetic and mechanical reworkings, with the purpose of distinction and comfort or intended for mixed transport and sports or leisure use . 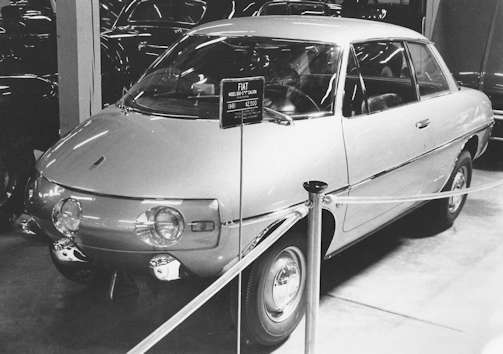 600 I series : (March 1955-February 1957) 633 c m³ engine  , Weber 22 DRA carburetor, 21.5  HP (15.8  k W ) at 4 600  rpm , maximum speed about 90  km / h . Doors hinged to the rear (portes suicides), sliding glass, direction indicators on the fenders like on the Topolino, front frieze "600" with the 6 aluminum whiskers, small taillights with aluminum base, rear direction indicator absent in the first examples until February 1956. In the summer of 1955 the petrol level indicator was perfected, eliminating the oscillations during the journey.

600 II series : (March 1957-February 1959) the displacement remains unchanged, but the power becomes 22 hp (16 kW) at 4 600 rpm, thanks to the Weber 22 IM carburetor. Descending door windows with crank mechanism are adopted, but without deflector, rear lights with yellow direction indicator and built-in reflector (later Fiat will supply a round adhesive reflector to be applied by the customer).

600D II series : (May 1964-October 1965) mechanics unchanged. In conjunction with the launch of the 850 passage to the doors with front hinges no longer visible from the outside.

600D III series : (November 1965-December 1969) the mechanics remain unchanged, except for the replacement of the cartridge oil filter with the centrifugal type. Various the best aesthetic and functional, such as the disappearance of aluminum moldings, except those on the sills, or floodlights with a larger diameter of 170 mm, unified by the " 850"which earned the model the nickname of" fanalona ". Bumpers with renewed rostrums fitted with plastic protrusion. Furthermore, we note the new front frieze with only one whisker and the fuel tank of greater safety, ingot size of 31 liters , which slightly decreases the capacity of the trunk.Another novelty, the wheel cups equal to those of the 850. The most important novelty, however, is represented by the return of the optional sunroof, as on the first series, available however only until 1969, a year before the final production release Presented at the Turin Motor Show in 1965, it was proposed to L. 690 100 in the version with closed roof and to L. 704 200 in the "Transformable" version with openable roof.last production came out of production in December 1968 . The 600D (also known as "750") was sold on the markets of northern Europe as a Fiat 770 (not to be confused with a model of the same name produced in Argentina and derived from the 850)

Great success was also achieved by the subsequent Multipla version , in which the space was considerably extended to reach 6 seats in 3 rows of seats. The backrests and armchairs of the two rear rows, through an ingenious interlocking play, could be easily pulled down, forming an extended and coplanar loading surface. This latest version met the favor of artisans, taxi drivers and large families.

Destined to replace the "500 C Giardiniera" it was the daughter of a daring idea of ​​Giacosa, who decided to advance the driving position straddling the front axle (fitted with the 1100 suspension) and adding two rear doors.

The "Coriasco" body shop carried out a van version, for the Italian Post Office , with a different tail and a door with a small load compartment above the engine, whose setting will be taken from the parent company and with a new square front and front doors with conventional opening will become the Fiat 600T, which later became 850T when the displacement was taken first to 843 and then to 903 cm³. 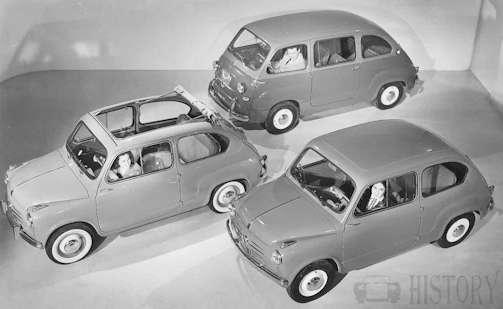