The Fiat 126 is a car produced by FIAT from 1972 to 2000 . Marketing in Western Europe ended in 1991 , continuing the sale on the Polish market , a country where the car had been produced since 1973 . It was the last car with a rear engineproduced by the Turin-based company.

Stylistically derived from the concept car " City Taxi ", realized by Pio Manzù in 1968 , the Fiat 126 was presented at the Turin Motor Show of 1972 with the task of replacing the  500 . The most important technical innovation was found in the entire body of the body that was designed, to promote the best safety for the end user by observing the new design principles .

Among the major technical changes include the displacement of the of the fuel tank from the front luggage compartment to the rear part of the car (namely under the rear seat) and the gearbox (4 speed) synchronized. Starting in 1978 and only for a few years, rack- and- pinion steering will also be adopted to replace the classic screw system on the 500.Even the engine , the well-known air-cooled twin-cylinder rear-mounted cantilever, was the same. Like the contemporary 500 R, the displacement was 594  cm³ (16 Kw, 23 hp). The interiors, instrumentation and controls are totally new, not without a measured level of finish.

The improvements to the 126 consisted essentially of the increased dimensions of the squared bodywork which, while keeping the pace unchanged, allowed for greater habitability, in addition to higher performance and increased safety features. The 126 was available both with a completely closed body (new compared to the "500") and a canvas roof  of its ancestor.

In November 1976, the Personal 126 (with removable rear bench seat and side storage pockets on the wheel arches) and Personal 4 (equipped with a larger fixed rear bench without the storage pockets), with plastic- coated bumpers and side bands in the same material, always 12-inch wheels but with a new design, with new wheel hubs and oversize brake drums (derived from the 900 T minivan ), slightly revised bonnet (fewer number of slots and number plate recess of different design) and completely internal new (with dashboard now also covered in fabric , like the seats).In July 1977 the engine displacement was increased to 652 cm³ (17  k W , 24 hp). The 126 first series, with Personal bonnet and rims , remained in the price list as a basic model (or Economica , according to the Fiat wording) until 1982 .The front headlights were also increased (unified with those of the "127" second series).

The Personal , compared to the first series, had better finishes and, thanks to the more refined interiors, an almost snobbish look, a characteristic that Fiat underlined in 1978 with the special Black and Silver versions (based on Personal 4 ), characterized by particular finishes , enriched equipment (blue glass, head restraint, reversing light, heated rear window ) and bodywork (painted, respectively, in black and gray) decorated (side moldings, bumpers and bands in contrasting color). In 1980 the Black and Silver were replaced by Brown and Red, which differed from the previous ones only for the coloring (dark brown or burgundy) and some details of the finish. These last two models were produced in the FSM Polish plants .

In addition to Italy, the 126 was also produced in the FSM factories ( Fabryka S amochodów M ałolitrażowych - Small displacement car factory) in Poland, in particular since 6 June 1973 from assembly lines in Bielsko-Biała and from 18 September 1975 also from the second Tychy plant . On 8 July 1979 the Italian production of 126 was discontinued (after 1 352 912 units produced) and from then on the 126 will be only of Polish production, including therefore also the models for the Italian market, in which the FIAT 126 with right-hand drive and the sunroof model continued to be produced for a further two years, a very popular option in Great Britain. In May 1983 the unified 126 was launched (the writing on the rear bonnet will simply remain Fiat 126 , shortly after accompanied by the wording Made by FSM in compliance with the law that protects the consumer from the purchase of goods whose origin may be presumed by the Company Mark and instead not corresponding to reality).

This 83 version was said to be unified as sold in a single set-up, substantially identical to that of the Personal 4 no longer on the list. In 1985 a restyling of the unified 126 was presented that definitively took the name of 126 made by FSM : it had the redesigned interiors (with a completely redesigned dashboard ), unpublished integral bumpers, several side fascias, a new rear- view mirror and no more starter. with a lever on the tunnel but with a key like all the other Fiat. The reversing light was moved under the rear bumper. The mechanics was that of the Personal 4 , like the reduced consumption (on average they covered 17  km with a liter of fuel). It was also sold in Yugoslavia as "Zastava 126" (but production was always in Poland).

The 126 Bis and combined, for the first time, with water cooling (instead of air cooling ). The displacement (704 cm³) and the power (18  k W , 25 HP) were also increased. On this occasion, the Italian-Polish subcompact allowed itself a few aesthetic touches: new 13 "wheels with plastic covers, new rear bumper with spoiler and additional lights (reverse and rear fog light) integrated, new mirror and new rear lights. Of course the cracks disappeared on what was once the engine hood.

The 135 / 70R13 tires gave the car a better ride, whose performance was improved (116 km / h top speed). This new version will also be exported to Australia . The prototype of the "126 Kombi" was also created, a family version with solutions very similar to the "500 Giardiniera" which, however, did not reach the production stage. While in Western Europe the Bis was the only 126 available, on the Polish market the old 126 FSM remained , with the classic configuration. In 1989 some adhesive strips applied to the side of the Bis gave birth to the 126 Up, the last Western 126; export ended in 1991.

In 1997, the Bis also exited the list in Poland, replaced by the 126 Maluch ("small" in Polish ) and the 126P , equipped with an air - cooled engine , but with electronic fuel injection and catalytic converter .

The "126" also inspired some special versions, built in small series by other bodybuilders, among which we can mention the "126 Jungla Savio", the unfortunate heir of the " 600 Jungla " and the "126 Moretti Minimaxi", a car that partially remembers the Mini Moke . Another interpretation was that of the FIAT itself which presented the " 126 Cavalletta "

It is interesting to note that the "Personal" displays were marketed under different names in various countries: if in Italy it is the "126 Personal 4", in Poland it is the "126 P 650", in Switzerland and in Germany (with an engine of 23 CV) the "126 Bambino" and in England it is the "126 De Ville". In the seventies , in Germany , several hundred were marketed with the "FIGO 126" trademark, equipped with a 250 cm³ 2-stroke engine by Goggomobil . They were intended for people with a special driving license(no longer allowed) for cars less than 250 cm³ displacement. In Italy, on the other hand, the "Valjolly Junior" was seen, a three-wheeled vehicle with a diesel engine and a 126 body, driveable with an A license.

The "Grasshopper 126" is a particular version presented at the Turin Motor Show of 1976 . Part of the typology then defined as Spiaggina , it consisted of a multi-purpose vehicle that was the same as insect due to its shape . The Grasshopper was designed on the basis of the experiences acquired by the coachbuilders connected to Fiat in creating the numerous beach models in the previous two decades.

The possible assembly of a hard-top was envisaged , to be used also in the winter months, and was driven by the sole engine of the Fiat 500 Giardiniera which allowed the existence of the small rear cargo compartment. It measured 3,072 meters in length , 1,368 in width and was 15 cm high from the ground. The performances were almost identical to those of the "126" series. Despite the goodness of the project, the "Cavalletta" did not arouse the expected public interest and was not produced, remaining a valuable concept car . 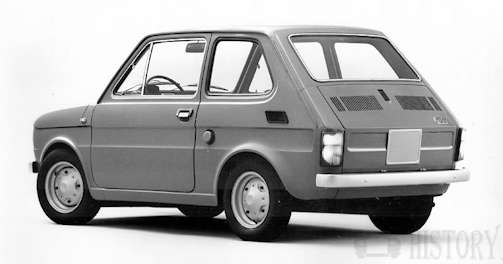