Before the outbreak of the First World War European car manufacturers began mass-production, following the example of Henry Ford in Detroit. The Fiat company was not among the passive onlookers. As early as 1910 the prototypes of the future Fiat Zero had been seen in the streets of Turin. They were first introduced on the market as late as 1912, when the assembly lines and modified conditions of volume production had been well run in.
Although the Fiat Zero followed the '1' model, it was shorter than its predecessor  hence the name Zero.

This car, thanks to its performance, realiabiity, longevity, and low price, was highly favoured by the public. The Zero was fitted with a 15hp four-cylinder in-line 1846 cc engine, with bore and stroke of 70 x 120mm. The drive to the rear axle was transmitted via a four-speed gearbox and a propeller shaft.

The chassis was supported on longitudinal semi-elliptic springs at the front and quarter-elliptic springs at the rear.
The first models were sold in the 'teardrop' version. By 1915 2041 had been built. One necessity for mass-production was strict standardization of all materials and prefabricated sections. Thanks to the standardization introduced in the production of this model, the use of different kinds of steel was cut down to one third, out of a thousand steel tubes only 36 were used, and 52 bearings instead of several hundred. This simplified supply, storage, and assembly procedures.
In 1915 an improved version of the Zero model was announced, fitted with a more powerful engine developing 14kW (19hp) at 2000 rpm. This car had electric lighting. It weighed 900kg (19801b) and had a top speed of 62km/h (39mph). The company provided a chassis fitted with either Spider or Laudaulet coachwork. A windscreen was among the novelties introduced in this model. Until then drivers had regarded this as unnecessary, since it obstructed the
view on a nice day and was a nuisance when it rained.

Production stoped due to world war one, when the factory was converted for war production . 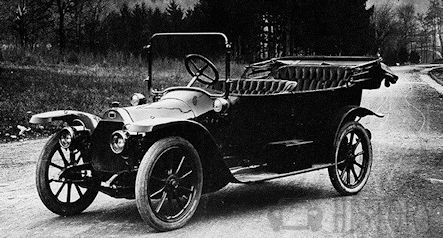