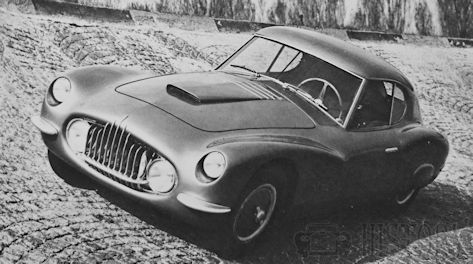 Commercillly, the Fiat 8V never made any sense, as it was not related to any other design, and it was certainly never tooled up for production in any numbers. But by the beginning of the 1950s Fiat were so large and so predominant in The sV was a special car which catered for the Italian sporting enthusiast who might not be able to affold a special Alfa Romeo or a Ferrari, but wanted to go motor an engine which might well have been used in other Fiat models if management had ever approved it (which explains the strange 70 degree angle between arranged to keep the width of the unit to a practical minimum), and cylinder banks a simple but sturdy type of tubular chassis frame of the type which every Italian sports car manufacturer seemed to favour at the time.

There were only 114 8Vs built in two years, almost all of which were constructed by hand in the experimental departments of the Fiat factory. That famous engineer Dante Giacosa had a lot to do with the design, which he often defended on the grounds that it gave his engineers something else to think about in place of boring small-engined family cars. However, because it was designed under Giacosa's supervision, the 8 V was practical as well as exciting, sensibly engineered and fast. Although there was independent front and rear suspension, the components were all lifted from other Fiat models already in production or being readied for production. The Fiat 1100 provided components at front and rear, while the axle and drive shafts were derived from the front end of the Campagnola cross-country (Land-Rover-type) vehicle. Bodyshells, of steel, were handbuilt either at Fiat, Ghia or Zagato, and were welded to the chassis frame on assembly. The coupes were so slim that the Passenger's seat was usually set back several inches so that the driver might have more space for arms flailing about in the excitement of turning the steering wheel or changing gear.

Developed in wind-tunnel conditions, which was still too The bodyshell, too, had bee rare a procedure at the start of the 1950s. Almost all 8Vs had four-speed all-synchromesh gearboxes, but a few of the last cars had five-speed boxes. Their engines could be tuned to about 130bhp, which was sufficient for an 8V to win the Italian 2-litre GT championship in 1954. It is also worth noting that when Fiat came to build their gas-turbine research vehicle in 1954, they used the chassis and suspension of an 8 V.
The limited-production experiment was not repeated by Fiat until the 1960s, when the car's natural successor was the Ferrari-engined Dino.