The four cylinder, aluminum, twin overhead cam engine was designed by ex-Ferrari engineer Aurelio Lampredi. Originally, the AC or first generation featured an 1,438 cc engine, which grew to 1,608 in the second or BC generation. The third generation, or CC, was first officially offered with the 1,592 cc and then 1,756 cc (some early CC left the factory with left over 1,608 cc engines).

Other mechanicals include a 5-speed gearbox (although very early AC models featured only a 4-speed), disc brakes at each wheel, power brakes, double wishbone front suspension, one carburetor per cylinder (2 Dual Weber or Solex carburetors on the BC series 1608 engine - except for the USA version which received mild carburation due to emissions constraints), electric fuel pump (on the CC series), and suspension by coil springs.

The 124 Coupé was designed as a three-box, notchback by Mario Boano, known for designing the bodywork on the Ferrari 250 GT "Boano". As many parts as possible were used from the 1966 FIAT 124 sedan, which was later made in the USSR by Lada only being discontinued in 2012, long after the Coupe's demise. Mario Boano was hired by FIAT and was made responsible for the in-house Fiat Centro Stile, while the softtop Spider was designed by Pininfarina. The Spider and Coupé shared the same basic platform as the 124 Sedan (or Berlina in Italian), however the Spider had a 14 cm shorter wheelbase .

The Fiat 124 Spider Abarth came with dual Weber 44 IDF carburetors unlike the regular 124 coupes and spiders which were equipped with dual Weber 40 IDF carbs. Fiat twincam engines tend to be oversquare in design, that is, big bore and short stroke.The 1608 cc is a perfectly square engine, its bore being 80 mm and its stroke being 80 mm. This gives them the ability, when combined with the camshafts and proper carburetors, to rev to high rpms. The Fiat 2-liter is the final evolution for this engine, and by creating a longer stroke (90 mm), actual capacity came to 1995 cc (the bore had been raised to 84 mm earlier on when the 1592 and 1756 engines first appeared). These were not used in any Coupes, but only on Spiders from 1979 on. This engine can be found, in turbocharged and intercooled form, in the Lancia Delta Integrale rally cars. These cars (in several forms and classes) took the World Rally Championship a total of seven times in the 1980s and 1990s.

The AC model began in 1967 and came with a 1438 cc twin cam, 4-speed gearbox (the option of a 5-speed item appearing in mid-'67), front and rear anti-roll bars and a torque tube rear axle. It featured a 120 mph speedo, three supplementary gauges, a faux wood steering wheel, a woodgrain dash and console top, as well as tail lights shared with the Lamborghini Espada and Iso Rivolta.

124 Sport Coupes were modern in chassis and engine design. Braking was via four 9" disc brakes with a front/rear weight-sensitive proportioning valve. It also had a sealed cooling system, viscous fan clutch and a toothed timing belt for the twin-cam motor, the first mass-produced engine to feature this instead of the usual chain-drive.

The torque-tube rear axle of the A series was replaced by a four-link rear axle with a Panhard rod in mid-'68, and remained the same throughout B and C models.

The BC featured revised styling with twin headlights and revised taillights shared with the Lamborghini Jarama.

The BC was available with both the 1438 cc and later (although sooner in Europe) the 1608 cc engine. Other details remained similar to the AC except the interior dash now had a 140 mph or 220 km/h speedo, 9000 rpm tacho in 1608 cc models and a clock. The steering wheel now had black painted spokes and the seats had for the first time cloth inserts in the centre. There was no woodgrain inside like before (all the panels were finished in black vinyl and the gauge rims were matt black to match) and "eyeball" vents were fitted in the centre console where the AC had a decorative panel simply filling in the space for an optional radio.

Options included green tinted windows, Cromodora alloy wheels with Chrome centre hub cap (as per AC optional), radio, seat headrests, rear windshield electric defrosting, electronic ignition. At the end of the BC run air conditioning was available as an option as well. The fuel tanks were always around 46 litres (12 US gal; 10 imp gal) and all fasteners used are metric as per European measurement.

The CC Coupe arrived in 1973 with new front styling and a revised squarer rear tail with a new deeper trunklid. Taillights also changed to a now vertical arrangement and side rear windows were revised.

The CC's revised interior featured a new dashboard incorporating a lower panel on the passenger side, an alloy fascia in front of the driver and seats covered completely in cloth. There was a new vinyl-covered steering wheel rim with anodised silver spokes. The optional but not uncommon Cromodora wheels now had a revised design with no chrome centre hubcap, instead having exposed wheelnuts. These were of an 8 slot design, the earlier wheels used coming in 6 slot configuration (an 8-slot design was also current but not original to the 124 range).

The car was also built with 1600 (FC-00) and 1800 (FC-02) engines under license in Spain as the SEAT 124 Sport. The first series produced was equivalent to the BC series of Fiat's version, and used 1608 cc engines provided by Fiat itself. The second series was a direct copy of the CC model, with both the 1592 and 1756 cc engines. SEAT later developed facilities for producing its own engines of this family, but it appears that the Sport versions were actually built in Italy. 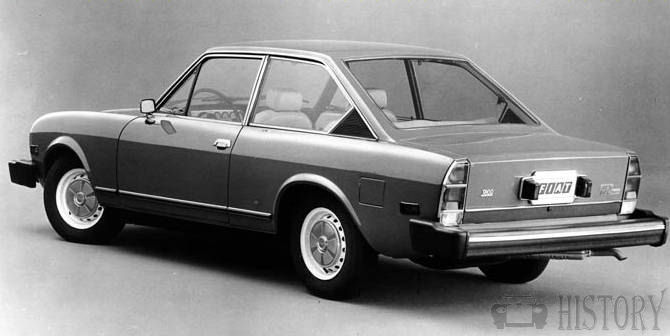