The Fiat Grande Punto is a supermini car produced by the Italian manufacturer Fiat since 2005. It is the third generation in the Fiat Punto series and was announced in August 2005, and launched at the Frankfurt Motor Show. In 2009, it was joined by the facelifted Punto Evo. In 2012, both were replaced by a revised model, called simply Punto, thus resurrecting the model name of its predecessor.It is manufactured in Italy, in Brazil (from 2007) and in India (from 2008).

The third generation Fiat to bear the name Punto, codenamed Project 199, the Grande Punto was unveiled at the 2005 Frankfurt Motor Show and went on sale later that year. Styled by Giugiaro, the car is based on the GM Fiat Small platform. Whilst the model shares some of its name with the previous Punto, a large number of its components are new, including a new chassis and body shell.

All the engines are Euro IV compliant. In 2007, a new 1.4 16v T-Jet turbocharged petrol engine, 120 PS (88 kW), became available. At the 2007 Frankfurt Motor Show, Fiat introduced 155 PS (114 kW) an Abarth version by Abarth & C S.p.A.. It was branded as an Abarth rather than Fiat. The car's nose, headlights and front grill look reminiscent of the Maserati Coupé (both were designed by Giorgetto Giugiaro of ItalDesign).

In Australia, Fiat introduced the Grande Punto in July 2006, sold only as the Punto; it is the first Fiat to be sold in Australia since 1989. In 2009, the Punto was discontinued in Australia, due to slow sales. The car was reintroduced in 2013 after Fiat began factory distribution in Australia, the car was repriced at a much lower price, that was more in keeping with its rivals.

It was launched in Mexico in November 2006. The Grande Punto is placed above the Fiat Palio in the Mexican Fiat car lineup. Initially it was sold with the 1.4 16v StarJet 95 PS (70 kW) engine with 6-speed manual gearbox in 5-door Dynamic and 3-door Sport trims. In December 2007, the 1.4 16v T-Jet 120 PS (88 kW) variant was launched. The Italian-made Grande Punto has already been launched in Chile and the Dominican Republic in petrol and diesel versions. The Grande Punto also went on sale in South Africa in 2006, replacing the previous generation.

In the rest of South America, the Brazilian-built Grande Punto (called only Punto) was launched in August 2007. Codenamed Project 310, it is produced in the factory of Betim, Minas Gerais, Brazil. The chassis is an adaptation of the Fiat Palio, a lower cost compact. Levels of safety were not maintained (airbags and ABS are optional on lower trim levels, and the highest one has only two airbags as standard), but the ride comfort is said to be the same. The five-door version is the only one available in the Brazilian line, and there are no plans for a two-door version (in Brazil, two-door vehicles are only accepted for cheaper cars). The engines available at launch were the 85 PS (63 kW) 1.4 Fire 8v and the 115 PS (85 kW) 1.8 Family 1 X18XE engine that comes from GM-Fiat/Powertrain, and later the 1.4 Fire 16v TurboJet, also available for the Linea. For the 2011 model, there were added the new E.torQ engines 1.6 16v and 1.8 16v. Produced by Fiat Powertrain Technologies, they were based on the discontinued Tritec engines. All non-Turbo petrol models produced in Brazil are flex-fuel.

Grande Punto was launched in India during the Delhi Auto Expo in January 2008, with sales starting in June 2009. The Indian market Punto is manufactured by the Fiat-Tata Motors joint venture Fiat India Automobiles Ltd (FIAL) in a new plant in Ranjangaon, Maharashtra. The Indian Grande Punto was based on the same 310 project of the Brazilian Punto. In August 2014 Fiat launched a face lifted Punto Evo based on Fiat Avventura style with new front fascia, new front and rear LED lights and new interior (the same of the European Punto Evo).

A related sedan car, the Fiat Linea, was launched in early 2007 to replace the aging Fiat Marea. It is built on an extended version of the Grande Punto's chassis, with a total length of 4,560 mm (179.5 in), making it part of the superior small family car segment.

Initially the Abarth Grande Punto was released with a 150 PS (155 PS when using 97 RON fuel) 1.4 turbo engine, but from 2008 there was available an Essesse kit, which could be installed at official Abarth service centres rather than in the factory.

The Punto Evo, a facelift version of the Grande Punto, was presented at the 2009 Frankfurt Motor Show. It has two new engines, a 1.3 L second generation Multijet diesel and a 1.4 L petrol engine with the MultiAir technology. It also features a new navigation system integrated to the Blue&Me system called Blue&Me–TomTom. 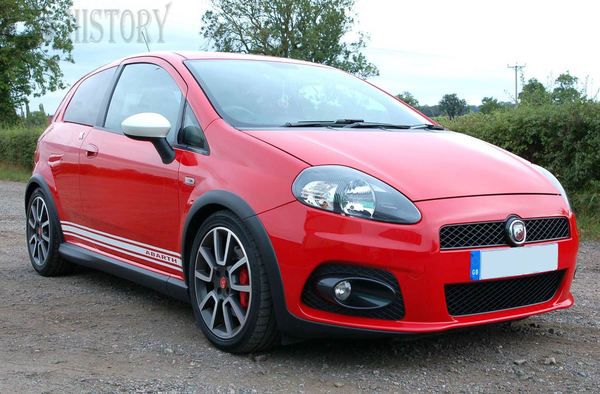 Fiat introduced the 2012 Punto in September 2011 at the Frankfurt Motor Show, as a facelifted version of the Punto Evo that re-introduced the Punto nomenclature (without Grande or Evo).

The 2012 Punto has updated front and rear bumper clips along with new alloy wheels. The interior is also updated with new fabrics and a revised Blue&Me system. 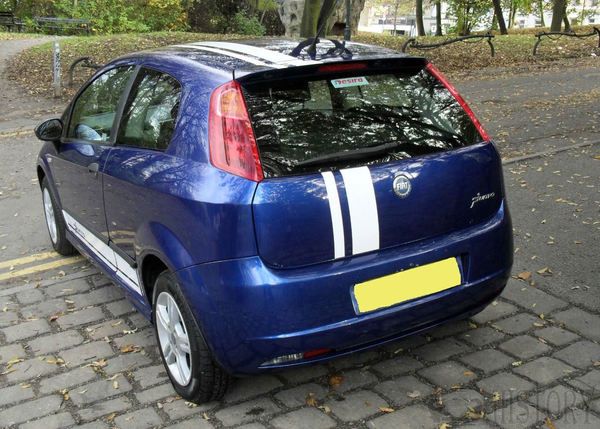