The Fiat 128 is a small family car marketed by the Italian automotible manufacturer Fiat for model years 1969–1985 in two- and four-door sedan, three- and five-door wagon as well as two-door and three-door coupes (128SL/128 3P) variants. Rather than a sport or convertible model carrying the 128 nameplate, the 128 running gear and engine were reconfigured for a mid-engined layout and marketed as the Fiat X1/9.

With engineering by Dante Giacosa and engine design by Aurelio Lampredi, the 128 was noted for its relatively roomy passenger and cargo volume — enabled by a breakthrough innovation to the front-engine, front-drive layout which became the layout "adopted by virtually every other manufacturer in the world" for front-wheel drive. Fiat promoted in its advertising that mechanical features consumed only 20% of the vehicle's volume and that Enzo Ferrari drove a 128 as his personal vehicle." The model was voted European Car of the Year for 1970.

3,107,000 examples were manufactured by Fiat from 1969 to 1985, along with worldwide examples manufactured under license, including those by Zastava, until 2001.

With engineering by Dante Giacosa and engine design by Aurelio Lampredi, the 128 was noted for its relatively roomy passenger and cargo volume — enabled by a breakthrough innovation to the front-engine, front-drive layout which became the layout "adopted by virtually every other manufacturer in the world" for front-wheel drive. Fiat promoted in its advertising that mechanical features consumed only 20% of the vehicle's volume and that Enzo Ferrari drove a 128 as his personal vehicle."

Fiat built an entire new plant in Rivalta, northwest of Turin, specifically to manufacture the new 128.

Front-wheel drive had previously been introduced to small, inexpensive cars with the British Mini. As engineered by Alec Issigonis, the compact arrangement located the transmission and engine sharing a single oil sump — despite disparate lubricating requirements — and had the engine's radiator mounted to the side of the engine, away from the flow of fresh air and drawing heated rather than cool air over the engine. The layout often required the engine be removed to service the clutch.

As engineered by Dante Giacosa, the 128 featured a transverse-mounted engine with unequal length drive shafts and an innovative clutch release mechanism — an arrangement which Fiat had strategically tested on a previous production model for a full five years, the Primula from its less market-critical subsidiary, Autobianchi. The layout enabled the engine and gearbox to be located side by side without sharing lubricating fluid while orienting an electronically controlled cooling fan toward fresh air flow. By using the Primula as a test-bed, Fiat was able to sufficiently resolve the layout's disadvantages, including uneven side-to-side power transmission, uneven tire wear and potential torque steer, the tendency for the power of the engine alone to steer the car under heavy acceleration.

The compact and efficient layout — a transversely-mounted engine with transmission mounted beside the engine driving the front wheels through an offset final-drive and unequal-length driveshafts — subsequently became common with competitors and arguably an industry standard.

The layout was sufficiently flexible that Fiat reconfigured the 128 drive-train as a mid-engined layout for the Fiat X1/9. 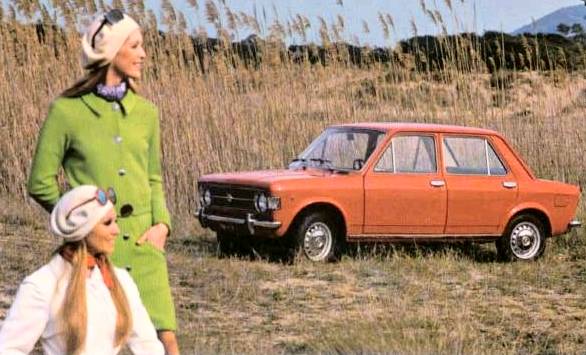 The 128 was styled similarly to the 124 and 125 and featured rack-and-pinion steering, front disc brakes, independent rear suspension with a transverse leaf spring, and a strut-type front suspension with integral antiroll bar.

Initially, the 128 was available as a two-door or four-door sedan. At the 1970 Turin Motor Show a three-door station wagon model called "Familiare" was added to the lineup The car was only available with a 1116 cc engine on launch, though the two-door-only 128 Rally edition launched in 1971 used a 1290 cc unit. Also in 1971, the Sport Coupé, an all-new coupé body on a shortened 128 platform, was unveiled at the Turin Show. On launch it was available with both existing 128 engines. The 128 range underwent a facelift in 1972, featuring a revised grille. 1974 saw the launch of the 128 Special, which used the Rally engine in a four-door sedan body. In 1975 the 128 3P (3-door) Berlinetta replaced the Sport Coupe. In 1976, the range received new bumpers, rectangular headlights, taillights and dashboard as well as modifications to the engines. At this time, the wagon was also renamed the "Panorama".

Moretti 128 Roadster was a coupe with removable roof (hard, in two parts) made by Moretti and unveiled at the Turin Auto Show 1969. The Moretti (coachbuilder) in Turin was the first to produce an open car based on Fiat 128, using the traditional engine of 1,100 cc. It was built factories via Monginevro in semi-scale and a very limited number of copies. Along with the roadster also a coupe version was also presented (with the same mechanics and aesthetics but with fixed roof) that was produced in several copies, most of which ended up abroad.

Zastava also produced the 128 in its original, four-door sedan form. Until 2009, CKD kits were manufactured by Egypt's Nasr car company as the Nasr 128.

In Argentina, the 128 was produced from 1971 to 1990 as a four-door sedan or five-door wagon, the Fiat 128 Rural, the latter unique to Argentina. Several trims and versions were available, including the IAVA sport series. In 1983 the car received a facelift with new headlamps, tail lamps and front grille, which was marketed as the Super Europa.

In Colombia, the 128 was produced by "Compañía Colombiana Automotriz" in Bogota.

In Sri Lanka, the Fiat 128 was manufactured by the Upali Motor Company until 1978. 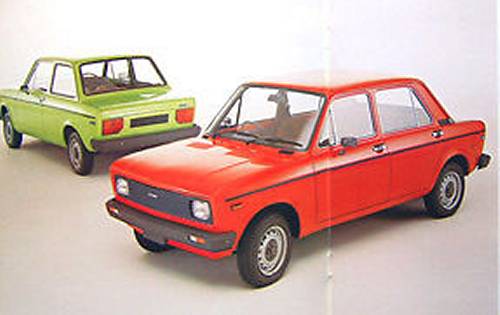