The Fiat 1100 is a compact automobile produced from 1937 to 1969 by the Italian car maker Fiat. It was built in several generations, with a separate chassis (until 1953) and then monocoque bodywork. The 1100 was changed steadily and gradually until finally being replaced by the inventive new Fiat 128 in 1969. There were also a series of light commercial versions of the 1100 built.

In the 1950s, Fiat were so interested in expanding into every possible corner of the four seater passenger car market that they were almost too busy to make any attempt to build smart and attractive sports cars. The result was that on the occasion when they decided to market a sporting version of the 1100 touring car, it was a very half-hearted effort indeed. Styling was left to Pininfarina, and this was so uninspired, not to say ugly, that one could be excused for thinking that it had been done by the apprentices on a bad day.

This 1100-based convertible there is no doubt that it was neither as striking as the handbuilt 8V which had gone before, nor as sleek and practical as the next generation of (1200-engined) Fiat sports cars which would follow in 1959. Mechanically, the original car used the pressed-steel underframe, suspensions and running gear of the 1100TV (Type 1100-103) saloon, on to which Pininfarina welded his steel two-door two-seater sports car bodyshell, which was graced by a wrap-around screen.

There was, indeed, a superficial resemblance to the Lancia Aurelia Spider of the day, which was reasonable, as it had also been shaped by Pininfarina at about the same time; the Lancia, however, was much more powerful. The original car was not at all fast, which might explain why only 571 of the original type were sold. In the autumn of 1957, however, at the Turin Show, Fiat launched the 1200 Gran Luce, which had a larger and more powerful engine, so the two-seater became the 1200 Convertible, but was not restyled except in minor detail. The last of all was built in 1959, after which the smarter and more powerful 1200 and 1500 Cabriolets took its place. 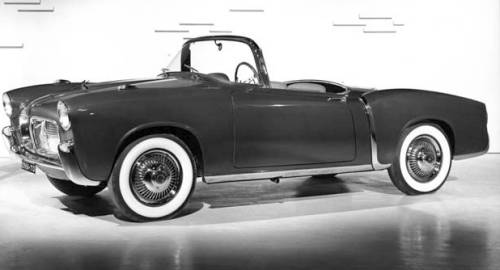