The Fiat Duna (Type 155) is a small car produced by Fiat in Argentina and Brazil, where it was sold as Fiat Prêmio. Launched in 1985 in Brazil, the Duna/Prêmio is based on the Fiat Uno, but unlike the Uno, it was a two-door sedan. The range was expanded with a three-door estate in 1987 called the Fiat Elba (or Duna Weekend), a four-door sedan added in 1987 and a five-door estate in 1989. The car was sold mainly in South America. Production ended in 2000 and the Duna and Elba models were replaced by the Fiat Siena and the Fiat Palio Weekend.

The Innocenti Elba was a rebadged version of the Fiat Elba estate, and replaced the Fiat Duna Weekend in 1991 for the Italian market, and continued to be offered until 1997.

It was the last car sold under the Innocenti marque. Fiat had in 1990 acquired the remains of the Innocenti business and for a few years pursued a strategy of importing basic Fiat models from low cost non-Italian Fiat subsidiaries, and badging them as Innocentis in order to differentiate them from the company's Italian built Fiat badged cars.

In Brazil, the Prêmio was presented in late 1985. In 1987, the Elba three-door estate model was released with a 1.5 L engine to replace the old Fiat Panorama, based in the Fiat 147. In 1988 a four-door sedan was added and in 1989, the Elba estate with five doors. Fiat produced the Duna and Prêmio in the Brazilian factory of Betim from 1985 to 1995. The sedan and estate were sold in Italy as the Duna and Duna Weekend from 1987-91.

In Argentina the four-door Duna was released in 1987, and from 1990 was the best-selling car in the market for almost six years. It was largely used as a taxi, with gas engines (CNG).

Fiat produced the Fiat Duna and Elba in the Sevel factory in Córdoba until 2000 with a total of 257,559 units built there. The Duna did not arrive in the United Kingdom, as Fiat Brasil did not produce cars in right hand drive.

A panel version of the three-door estate was sold as the Fiat Penny. Made only in Brazil, it was never available in the local market in order to avoid internal competition from the Fiorino which, actually, due to the pick-up body, fitted better the market preference. 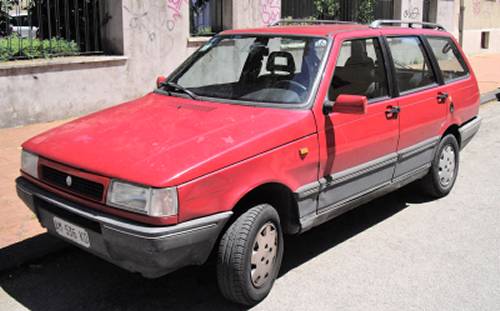