First shown at the Frankfurt Motor Show in September 1989, the Uno received a thorough facelift. The bodywork at the nose was updated and a different tailgate was fitted, improving the drag coefficient to Cd 0.30, and matching the corporate look of the then new Fiat Tipo. The interior was also revised. The pod switchgear was replaced by stalks and an effort was made to stop the dashboard rattles of the Mark I. 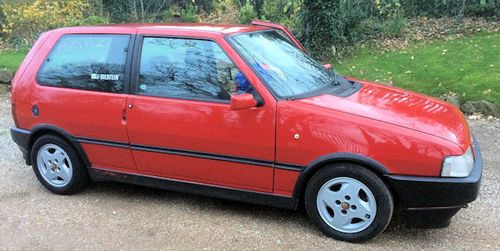 Its bodywork was made similar to that of the Tipo (so much so that, to distinguish it from the previous series, motorists defined it with the curious nickname "Tipino"), on sale for just over a year, thus making it longer than 4.5 cm, and with a higher aerodynamic coefficient , now equal to a C x of 0.29. The new front featured a lower and narrower grille , similar to that of the Tipo, and thinner headlights, in line with the brand's new family-feeling. The front bumper had more generous dimensions. Unusual moldings and new cups appeared on the sideswheel that differed according to the versions, but it was the tail that received the most attention from FIAT designers. The tailgate was modified and made more massive, close to that of the Tipo; the bumper underwent the same treatment; the rear window was larger with a hinged rear window wiper ; finally, in the rear light clusters the direction and reverse indicators became burnished.

At this time, the old 1.1 litre engine was replaced by a new FIRE version, and a new Fiat Tipo-derived 1.4 litre (1,372 cc) engine replaced the Ritmo/Strada-derived 1.3 litre in both naturally aspirated and turbo versions. A 1.4 litre Uno Turbo could reach a claimed 204 km/h (127 mph), while the 1.0 version only managed 140–145 km/h (87–90 mph) depending on which transmission was fitted. The Uno Turbo i.e. variant was also restyled, upgraded with a Garret T2 turbine, Bosch LH Jetronic fuel injection and better aerodynamics.

This second series was on sale in 9 engine versions, 6 petrol and 3 diesel and also available in the Selecta version equipped with  a continuously variable CVT automatic transmission. Characteristic of this series was the abandonment of the 1.116 / 1.301 cm³ engines derived from Ritmo, replaced by the corresponding ones of the Type: the new 1,108 cm³ FIRE with 57 HP carburettor, and the 1,372 cm³ which on the Uno receives single point electronic injection (Uno 70 ie). As for the FIRE 999 cm³. was made compatible with 95 RON unleaded petrol by slightly reducing the compression ratio (from 9.8 to 9.5) and a different setting of the ignition advance: the engine thus became less brilliant, less elastic and less pleasant to drive. The Turbo version ieit grows to 1,372 cm³ and can boast 116 HP which, however, drop to 111 in the catalyzed version; the Uno Turbo ie second series is recognizable externally by the specific alloy wheels, more pronounced front bumper with air intake for intercooler and oil radiator, rear lights with transparent white / red stripes, red profile on the bumper and side skirts with lettering Turbo ie while internally it is recognized by the more profiled seats, very complete instrumentation and three-spoke steering wheel covered in leather. The "basic" versionFIRE (1992) , to which the S and SX trim levels were added, then a Van version was presented, which was not particularly successful.

Among the Trends also appeared the 60 equipped with the same engine as the Uno CS. The special versions were: the Fiat Uno 45 Rap, Uno under construction (appeared in June 1991) Base with the addition of matching bumpers, full sunroof, Uno S wheel covers and special dedicated interior trims (covered with the same black striped Blue and Green fabric, used on some versions of the "Fiat Panda Dance") and the "Fiat Uno Rap Up", a Uno Rap with the options of the Uno in the S trim level with the only difference being the roof that can no longer be opened completely, but only with compass and catalytic converter (produced since June 1992 as of August 1994 1.0 ie and 1.4 ie); both were produced in only 4 color variants: White, Green, Black and Blue (Rap Up only); and were aimed at a young audience; and the "Hobby" version, available only with the FIRE 999 engine, offered a sunroof and longitudinal roof racks, seats with a dedicated fabric and the 4-spoke steering wheel of the SX. Mainly intended for the female market was theSuite , which featured high-end finishes. In 1993 the "Formula" version was proposed with 1.4 petrol and 1.4 turbo diesel engines, with a decidedly sporty feel, it was characterized by the 3-door bodywork, wheel arch bumpers and side skirts derived from the "Turbo ie" model, 4-spoke alloy wheels, adhesive decal with 2 crossed flags bearing the wording "Formula", interiors derived from the "Turbo ie" model

Production in Italy ended with the FIAT brand in October 1995 , after having joined its heir, the Fiat Punto, for almost a couple of years .

The Innocenti Mille Clip and Elba survived , which will come off the price lists (together with the Innocenti brand ) two years later, in November 1997, coinciding with the presentation of the Fiat Palio .

During the 12 years in which it remained in production, the Uno was sold in over 6 million units (released from the Italian factories alone) but was also produced in various countries such as Poland until 2002 (173,416 units, produced in Bielsko-Biała until 2000 and then to Tychy, of which 14,774 as Innocenti Mille Clip ), Morocco , India and Turkey . In the first two months of 1994 , five thousand copies were sold.

It continued to be produced in Brazil (under the name Mille ) (more than 2,200,000 copies since 1984 ) with an ethanol feed , in South Africa and Pakistan . As of December 31, 2006 , it is estimated that well over 8 million Fiat Uno were produced globally in the world.

The Uno was used by the Italian Police Forces both in the I and II series up to the 2000s, some rare specimens of the II series are still used by the Carabinieri and Police for internal services.

Uno production ceased in Italy in 1995, with sales throughout Western Europe stopping at the same time. A total of 6,032,911 units were built in Fiat's Italian factories. The Uno's replacement in Western Europe was the Fiat Punto, which was launched in late 1993.

After Western European production and sales ceased, the Uno continued to be manufactured and sold in many other regions.

The car was made in Brazil until December 2013 in three versions: Mille Economy, Uno Furgão and Fiorino Furgão. A total of 3.6 mllions Unos and Mille were built in Brazil during its 30-year production.

In the second half of the 1980s and the first half of the 1990s, the Uno had a sedan, a pick-up and a wagon version, called Prêmio, Fiorino Pick-Up and Elba, respectively.

The Brazilian Uno featured an independent, transverse leaf spring suspension at the rear, based on the tried and tested Brazilian Fiat 147 (similar to the Italian Fiat 127). The clamshell design of the hood was also unique, since the Brazilian Uno kept the spare tire located in the engine bay, like the old Fiat 147, thus saving extra space for the luggage in the trunk. Originally sold with 1.05, 1.3 or 1.5 litre petrol engines (also in versions made to run on ethanol), a 1.6 litre was added to the lineup in 1989. The now redundant 1.5 was cancelled,but another 1.5 was introduced in 1991, that time derived from the 1.3.

The Fiat Uno family, in Brazil, had a turbocharged 1.4-litre four inline sports version, the Uno Turbo i.e., between 1994 and 1996. This car was sold as a normal production vehicle with 1801 units produced.

From 1990 to 2013, a 1.0-litre version was sold as the Fiat Mille, as a budget entry-level model, and received its most recent facelift for the 2004 model year. A Fire engine was used since 2001. The 2005 Brazilian range has received a Flex Fuel system, enabling the car to use ethanol or gasoline as fuel, both pure or in any proportion mixture; also, there is a version fitted for unpaved roads called Mille Way, which includes a more resilient suspension, larger wheels and side cladding.

Despite the launch of the new Brazilian-built Uno in 2010, production of the Mille Economy and Mille Way continued until December 2013, only with a 1.0-litre engine. The Uno Furgao van (based on the series Uno) and the Fiorino Furgão were available with a 1.25-litre Fire engine. 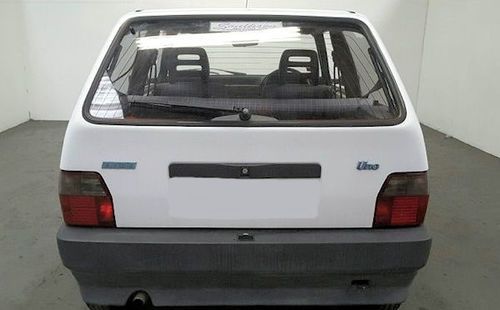