The Uno (Type 146) was launched in January 1983 to replace the ageing Fiat 127. Designed by Giorgetto Giugiaro's ItalDesign company, its tall, square body utilising a Kamm tail achieved a low drag coefficient of 0.34 won it much praise for airy interior space and fuel economy. It incorporated many packaging lessons learnt from Giugiaro's 1978 Lancia Megagamma concept car (the first modern people carrier / MPV / mini-van) but miniaturised. Its tall car / high seating packaging is imitated by every small car today. It reversed the trend for lower and lower built cars. It showed that not just low sleek cars could be aerodynamic, but small, roomy, boxy well packaged cars could be too. In 1984 it was voted European Car of the Year.

Initially, the Uno was offered with the 0.9 litre (903 cc) OHV, 1.1 litre (1116 cc), and 1.3 litre (1301 cc) 138-series SOHC petrol engines and transmissions carried over from the 127. The 1.3 (1300 cc) diesel (not for the UK market) engine was launched a couple of months later. The Uno's badging was not by the commonly used measurement of engine size but by metric horsepower: 45, 55, 60, 70, 75 or 90. The Uno was available as either a 3 or 5-door hatchback. It also featured ergonomic "pod" switchgear clusters each side of the main instrument binnacle, (that could be operated without removing the driver's hands from the steering wheel), although indicators remained on a stalk; an unusual arrangement similar to that used by Citroën.

From 1985, the 1.0 litre (999 cc) SOHC Fully Integrated Robotised Engine (FIRE) powerplant was offered. This was a lighter engine, built with fewer parts, and gave improved performance and economy. Also in 1985, the hot hatch version - Uno Turbo - was launched, with an IHI turbocharged Ritmo/Strada-derived 1.3 146-series engine, initially offering 105 PS (77 kW). It was priced to compete with the Peugeot 205 GTI. The Turbo variant offered phenomenal performance for a supermini-sized car and was capable of reaching 210 km/h (130 mph).

Also in 1987, the Uno Selecta continuously variable transmission (CVT) automatic was launched. The CVT transmission was a co-development with Dutch Van Doorne and Ford, (Fiat owned 24% stake of Van Doorne at that time). The Selecta transmission should be avoided according to honestjohn.co.uk, which claims it can cause expensive repairs. 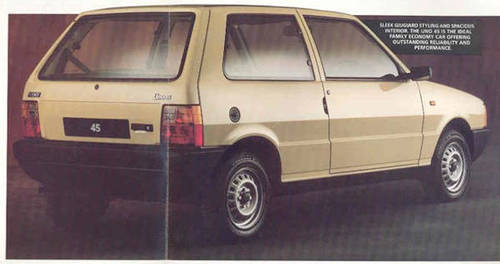