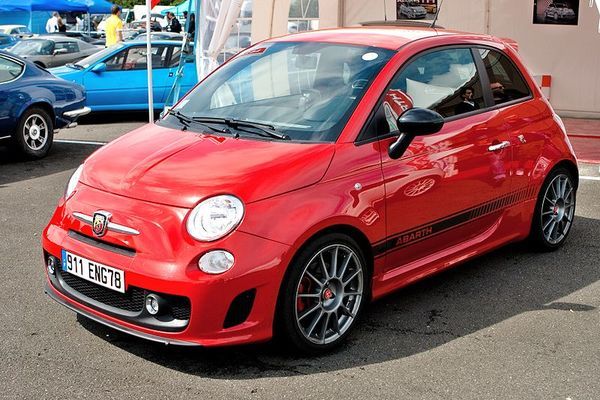 The 500 Abarth was unveiled at the 78th Geneva Motor Show, a year after the rebirth of Abarth brand and company.

The 500 Abarth Opening Edition is a limited production model (100 cars) for the Italian market. It includes the upgrades found in the 500 Abarth Esseesse. The car is available in two colours (Campovolo grey or pearlised White), while there is also the option of special stickers including a red chequered flag on the roof (exclusive to the Campovolo Grey shade) that pays homage to the numerous sporting victories of the Abarth brand.

Unveiled in 2008 Paris Auto Show, the 500 Abarth Assetto Corse is a limited production model (49 cars), designed by the Fiat Group Automobiles Style Centre and produced by a team of Abarth Engineers and Designers. Engine is rated at 200 PS (150 kW; 200 hp) at 6500 rpm and 300 N·m (220 lb·ft) at 3000 rpm. It includes white 17-inch (430 mm) special ultralight racing wheels, low ride, sports racing mirrors and a place for a number on the sides, pastel grey body with red Abarth side stripes. 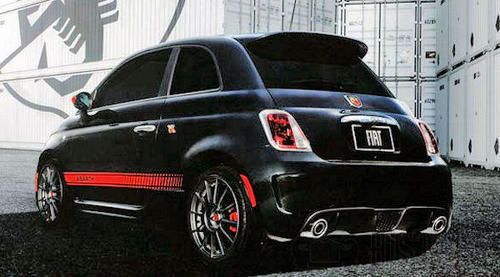 The 500 Start&Stop is a model based on the 1.2 Lounge, with parts built by Bosch and Fiat Powertrain Technologies. The Start&Stop system stops the engine automatically whenever traffic conditions bring the car to a complete halt, and restarts it when the driver wants to move off again. The car reduces fuel consumption by up to 12% over a regular 1.2 Lounge in urban driving, with 113g/km CO2 emission. Other standard features include hands-free telecommunications and entertainment system. It costs GB£11,300 in the UK.

The 500 PUR-O2 is based on the Fiat 500 Start&Stop, but also includes an Eco Drive system. Beginning in January 2009, a Dualogic transmission option is also available. The vehicle was unveiled in 2008 Paris Motor Show.

In 2008, Fiat launched a special edition 'By Diesel' 500. In a partnership with Fiat and Italian clothing brand Diesel, the special edition 500 will run, it is suspected, for two years, with a production run of 10,000 planned. The 500 by Diesel is available in a choice of three exclusive colours, and can be marked out from standard 500s with its unique alloy wheels, 'Diesel' logos and burnished metal inserts to the bumpers and side-rubbing strips. Inside, there are denim seats and a special 'Diesel' branded gear knob. Coloured stitching can also be seen throughout the car's already unique interior. The 500 by Diesel is based on the 500 Sport, using the same 1.2 L petrol, 1.4 L petrol and 1.3 L diesel engines.

The 500 Aria is a concept car based on the 1.3 L Diesel vehicle, but with diesel particulate filter, Stop & Start system, Dualogic transmission, recycled rubber floor from used tires, recycled and woven leather upholstery (mataleather) by Matamata, Ecolabel polyester fabrics by Apollo company. The vehicle was unveiled in 2008 Geneva Motor Show.

The Ferrari version is a limited edition model (200 units) of the 1.4 (100 bhp) Sport, mainly used by Ferrari dealers as courtesy cars for owners to use while their Ferraris are being serviced. It includes red body, aluminum pedals, red brake calipers, 16-inch wheels with 195/45 tires, sporty steering wheel and a few tuning and exhaust modifications. Sixty of the Ferrari edition cars were shipped to the UK.

A special edition of the 500 designed to commemorate the 50th anniversary of toy icon Barbie. Created by Fiat Centro Stile and Mattel, the car was unveiled on March 9, 2009, in Milan's fashion district, and parked at the entrance to La Rinascente department store, in Piazza Duomo, where German singer Nena performed live in the background. The 500 Barbie Edition will also be making an appearance at Fiat UK's flagship store at Marylebone in London.

The Abarth 500 "SpeedGrey" is a very limited edition version model (10 cars only) produced by Neubauer, the official Abarth distributor in France, exclusively for the French market. Starting from the "Esseesse" version of the Abarth 500, Neubauer added the "Record Monza" variable back-pressure "dual mode" exhaust system (boosting output to 165 PS (121 kW; 163 hp)), as well as a pair of "Abarth Corsa by Sabelt" seats in black leather upholstery with carbon fibre shell and seat base. Tinted windows were added, along with the Blue&Me GPS system. Finally, Neubauer repainted the car in a special "Maserati Grey" paint.

A limited edition 500 in a special Matte Black paint. It is the first vehicle in the small car segment to feature this unique paint finish. Other special features include:

It is a version of Fiat 500 celebrating 150th anniversary of the unification of Italy and Gucci's 90th anniversary, customized by Gucci Creative Director Frida Giannini in partnership with Fiat's Centro Stile. It included choice of 2 body colours (black, white), custom rims for 195/45 R16 wheels, green-red-green stripe at the car's perimeter. The black version has detailing in shiny chrome with an interior that contrasts sharp black and white for a contemporary and racy feel, whilst the white version complete with satin chrome detailing and ivory and black interior creates a softer look. Versions with 1.4 of 100 horsepower engine includes rear brake calipers in Gucci green.

The vehicle was unveiled in metropolitan cities such as Paris, London and Tokyo, followed by the European commercial launch in July. Production order was available between April 1 and June 30 in Europe, and become available in the rest of the world at the end of 2011.

The vehicle was unveiled in 2011 New York Fashion Week.

It is a limited (100 units) version of Fiat 500 Lounge with 1.4 litre MultiAir 101 HP engine, for China market. The vehicles came in 5 designs from 5 different Chinese designers.

Mee Wong (illustrator and teacher at the Guangzhou Art Institute)'s car is inspired by panda.

Orders for a Fiat 500 from July 12 to September 15 took part in a final draw entitling them to replace the car they ordered with a Fiat 500 "First Edition".

It is a cabriolet version of 500 by Gucci. It included a choice of 2 body colours (white with matte chrome-plated elements, glossy black with shiny chrome-plated accents), black soft top with green-red-green Gucci web pattern printed lengthwise (the same graphic pattern is sported on the side of the car), 16-inch alloy wheels, two-tone Frau leather seats with Guccissima print.

The vehicles were unveiled in 64th Frankfurt International Motor Show.

The number one car was won by Adelheid D. Kieper from Rosche, Germany, in a TwitBid campaign.

The vehicle was unveiled at the 2012 Geneva Motor Show.

A softtop version (cabriolet) 500C was unveiled at the Geneva Motor Show in March 2009. It is the same size as the basic model, and features the same three engine options. It will also have the Start&Stop system.

The Fiat 500 had its US debut at the 2010 North American International Auto Show, and production started in December 2010. It resurrected the Fiat brand in the United States and Canada, where the brand had not been sold since 1984.

The North American version, built in Toluca, Mexico, by Chrysler, has the same trim levels as the European 500: Pop, Lounge and Sport. The American version has some exterior differences compared to European version, including a more rounded centre grille and a plastic lip that wraps onto the bottom of the spoiler. The cabriolet version 500C comes for sale a bit later in Spring 2011. The 500 Abarth is also confirmed for North American markets. The US 500 version was rated at 38 mpg-US (6.2 L/100 km; 46 mpg-imp) highway by United States Environmental Protection Agency.

The Toluca-built version of the 500 is for sale in the U.S., Canada and Mexico and was launched in mid-2011 in Brazil and Argentina where it replaces the European version made in Poland.

It is a limited (500 units) version of Fiat 500 with 1.4L MultiAir engine, for the US market. It include a choice of 3 body colours (Bianco (White), Rosso (Red) and Grigio (Gray)), manual transmission, exclusive Prima Edizione badge, sequential VIN and badge.

Following the announcement, Zagato claimed it did not have any involvement with the 504 Coupè Zagato Elaborata, and had taken the necessary legal actions.

It is a limited (250 units) version of 2012 Fiat 500 Lounge model produced in partnership with The Breast Cancer Research Foundation. It includes a choice of Argento (silver) and Bianco (white) body, with a signature dark pink bodyside stripe, Nero leather front and rear seats with pink accent stitching on the perimeter and signature "500" logo embroidered on the front seatbacks and a pink ribbon embroidered on the floor mats, pink accents on Nero leather steering wheel.

It is a production version of the 2011 Specialty Equipment Market Association (SEMA) Hottest Sports Compact Car award-winning car, but based on 2012 Fiat 500 Sport with 2-stage options.