The Fiat 500 (Type 312) is a city car built by Italian automaker Fiat since 2007. The car is currently produced in Tychy, Poland, by Fiat Auto Poland S.A. and in Toluca, Mexico, by Chrysler Group LLC. The four-seater, three-door hatchback 500 is almost identical to the retro concept car Trepiùno presented in 2004. Designer Roberto Giolito's current Fiat 500 is a modern copy of Dante Giacosa's 1957 original rear-engined Fiat 500 or "Nuova 500".

The car was announced on May 5, 2006, and the first images were presented on March 20, 2007. The car was launched officially on July 4, 2007, with 250,000 people in attendance. This was the largest launch party held in the last ten years, a testament to the Nuova 500’s huge popularity. The car was displayed in the squares of 30 cities in Italy for the launch.

The 500 is available with four different trim levels: Naked (this version not available in the United Kingdom, opting for this trim level means that the car does not have the seven airbags meaning that the passenger safety rating drops), Pop, Lounge, and Sport. Customers can also choose between 15 interior trims, nine wheel options, 19 decals, and 12 body colours. There are over 500,000 different personalized combinations of the 500 that can be made by adding all kinds of accessories, decals, interior and exterior colours, and trims. The car is also available with the Blue&Me navigation system. The American Sport version has the 1.4 litre Multiair engine, which is manufactured in Michigan.

The car was chosen to herald the marque's official return to the American market after their embarrassing exit over 27 years prior due to quality control problems.

The design of the 2007 Fiat 500 is based on the Fiat Trepiuno concept introduced at the 74th Geneva Motorshow in 2004. The Trepiuno was designed by Fiat Stile Centre. The designer who penned the Trepiùno concept was Roberto Giolito. This car featured a distinctive retro-look resembling the original Fiat 500, which proved to be an enormously practical and popular vehicle throughout Europe.

The name "Trepiuno" is a contraction of "tre più uno", meaning "three plus one" in Italian; the car received this name because it was one step above a 2+2, as it was designed so that by deflating part of the dashboard around the front passenger's legs, and using high-tech thin-layered materials which take up less room than conventional upholstery, the front passenger seat could be slid forward far enough to accommodate another full-sized adult seat behind it; the fourth passenger, behind the driver, would occupy the smaller seat.

At launch three engines were available: two petrol/gasoline and one diesel engine. All the engines met the Euro5 standards. The 1.3 Multijet was equipped with a diesel particulate filter (DPF) as standard. Despite the vehicle's name implication, the lowest displacement is 1242 cc with 69 metric horsepower (PS), notably larger and more powerful than both the 1950s "original" and the 1990s Cinquecento. A smaller, turbocharged TwinAir two-cylinder engine with 85 PS was later unveiled at the 2010 Geneva Motor Show and joined the production range the following year. However, at 875 cc ("0.9 L"), the TwinAir is still far from being a true "500", and is only a few cc smaller than the Cinquecento base model engine - albeit twice as powerful. Regardless, the TwinAir claimed the Best New Engine Award for 2011, and is currently claimed (based on official Euro test cycle data for emissions and fuel consumption) as the "world's greenest petrol engine", although its real-world efficiency is often called into question in more detailed reviews. Rumour of a naturally-aspirated 0.9 L TwinAir to come later (with similar power output to the current 1.2 L) plus a more powerful turbo variant was reported alongside the initial news of the turbo version, but has not yet appeared on the market, and no plans have been announced for yet-smaller engines

The new 500 has seven airbags in all models. There are also electric aids available such as ABS brakes, ESP (electronic stability program), ASR (antislip regulation), HBA (hydraulic brake assistance) and hill holder device. The 500 was awarded with five stars by EuroNCAP, succeeding the BMW MINI as the shortest car to have a five-star rating. Fiat also said that the 500 was engineered so that it would have been able to achieve a six-star rating had EuroNCAP adopted this classification.

The Fiat 500 has remote locking and an immobiliser as standard. The Fiat 500 was tested by Thatcham's New Vehicle Security Ratings (NVSR) organisation and achieved the following ratings

The vehicle was unveiled at 2011 Geneva Motor Show.

The Zagato version was confirmed for production but no date has been given.

A larger vehicle with many styling cues of the Fiat 500 but with five-doors and based on a different platform is known internally as SUSW (Small US Wide).

The vehicle was unveiled in 2012 Geneva International Motor Show. The model was officially made available in the United States in the spring of 2013 as a 2014 model.

The Italian automaker gave Swedish company EV Adapt permission to buy the stock 500, swap out the combustion motor for an electric one, and then resell the car as an EV. The vehicle is now available throughout Europe. Buyers have the option of purchasing a battery-less car for a reduced price, and then renting its battery pack  (in partnership with Alelion Batteries, all vehicles from EV Adapt are equipped with Lithium iron phosphate batteries). The range is 120 kilometres (75 mi) and the max speed is limited to 120 kilometres per hour (75 mph). 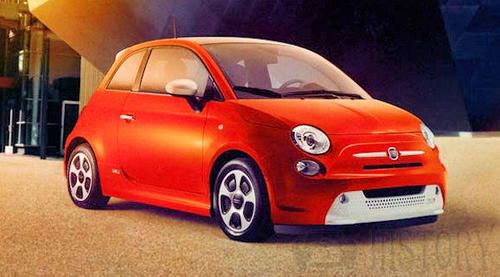 Chrysler unveiled the Fiat 500 Elettra concept electric car in the 2010 North American International Auto Show. The carmaker announced its decision to build an electric version of the 500 for the U.S. market, with a powertrain to be developed at its Auburn Hills, Michigan headquarters. Initially the electric car was scheduled go into production in 2012.

The production version, called Fiat 500e was unveiled at the November 2012 Los Angeles Auto Show. Deliveries began in California by July 2013, and around 150 units sold during its first month in the U.S. market. The U.S. rollout is scheduled to continue to other states with mandates of sales of zero emission vehicles, but Fiat-Chrysler does not have plans to make the 500e available in Europe.

Designers and engineers of the Fiat 500e work to minimize drag while keeping the iconic styling of the conventional powered Fiat 500. For the 500e to achieve a 0.311 coefficient of drag (Cd), as compared to the 2013 Fiat 500 Lounge model’s 0.359 Cd, eight exterior refinements were developed in the wind tunnel to enable the 48 count drag reduction. The result of hours of wind-tunnel testing allowed the 500e to achieve an additional five miles of range compared to its gasoline-powered sibling. Among these changes are front fascia sealing, aerodynamically optimized front fascia design, drag reducing rear fascia design, liftgate-mounted aerodynamic spoiler, and Under vehicle bellypans.

Fiat describes the 500e's unique exterior design as retro-futuristic, and the vehicle is has a smartphone app that notifies the owner of vehicle status. Behind the steering wheel the 500e has an all-new 7-inch thin-film transistor (TFT) display to provide increased functionality with more intuitively delivered information of the power gauge, driving range and state of charge. In addition, the new Electronic Vehicle Information Center (EVIC) utilizes its full-color capabilities with the use of picture graphics to illustrate vehicle functions including a trip computer, tire-pressure monitoring and vehicle status messaging system. The available TomTom navigation pairs with the Fiat 500e’s standard BLUE&ME Handsfree Communication technology and features a 4.3-inch touchscreen display mounted on top of the instrument panel.