1954 saw the introduction of a new four-cylinder sports racer, the 750 Monza. Sporting a three-litre version of the 500 Mondial's engine, the Monza was much more powerful, with 250 hp (186 kW) available, but barely heavier at 760 kg (1675 lb). The new-style body was penned by Pinin Farina and presaged the droop-nose look of the famed 250 GTO, but it was Scaglietti's 750 Monza, with its faired-in headrest suggesting the flowing Testa Rossa that drew attention.

The line of the model, which anticipated the famous "low snout" of the famous 250 GTO , was the work of Dino Ferrari . The construction of the body of almost all samples was instead executed by Scaglietti .

The engine in the "750 Monza" stemmed from the inline four-cylinder of the 500th Mondial , but had an engine capacity greater, more precisely 3 L . This engine was therefore even more powerful than that fitted to the model mentioned, with its 260 hp . Said engine also had a couple conspicuous that, along with the power, supplied to the model a good competitiveness in the races. The car, compared to 500 Mondial, however, was heavier (760 kg against 720 kg).

The four-cylinder in-line in question was designed by Aurelio Lampredi . The series of Ferrari engines with this arrangement of cylinders originated in the early fifties , when Enzo Ferrari decided to invest in this type of engines with the intent of replacing the V12 designed by Gioacchino Colombo .

Among the reasons that led to this decision by Enzo Ferrari was the highest use fuel of the V12 compared to the four-cylinder. In addition, the World Formula 1 Championship of 1952 were applied rules derived from Formula 2 , which gave a strong impetus to the evolution of this type of engine. The first one was developed, a 2 L of displacement , was successfully mounted on the 500 F2 , who won two world titles in Formula 1 ( 1952 and 1953 ). This engine was then installed on road cars. Later they were prepared two more engines to four cylinders in line, who had a displacement of 2.5 L and 3 L; They were installed on two competition models, respectively on TF 625 and S 735 . Subsequently the second type of engine was mounted on the "750 Monza." Further evolution of the four-cylinder, which had a displacement of 3.4 L , was then installed on the 860 Monza .

The name of the "750 Monza" was derived from the displacement  of the engine (ie one relating to a single cylinder ), which was about 750 cc, and the victory in the race in which it began  Monza .

The "750 Monza" debuted on June 27th 1954 at the Grand Prix Supercortemaggiore which took place at ' Autodromo di Monza . In this race two of the model captured the top two positions. On the highest step of the podium with Umberto Maglioli and Mike Hawthorn , followed by José Froilán Gonzalez and Maurice Trintignant . In the other matches of the World Sports Prototype Championship of 1954 the "750 Monza" gave an important contribution to the final victory of the Ferrari . The success was not repeated in the following season, which was by Mercedes-Benz thanks to the victories of the 300 SLR and "750 Monza", although still competitive.

The engine was an inline four-cylinder engine is not supercharged front and longitudinal. L ' bore and stroke were respectively 103 mm and 90 mm, carrying the displacement total 2999.62 cm³ . The compression ratiowas 8.6: 1, while the power from the engine maximum output was 260 bhp at 6000 rpm . 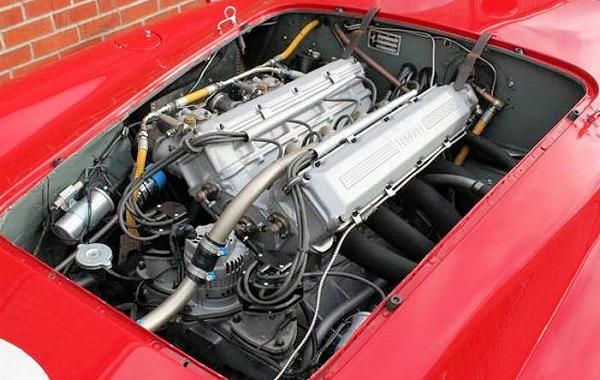 The distribution was formed by a dual overhead cam head with two valves per cylinder . The ' Power was provided by two carburetors brand Weber and model 58 DCOA / 3. The ' power was double and the corresponding apparatus included two coils . The lubrication was dry sump , while the clutch was twin-plate.

The suspension front were independent, and had installed wishbones and a leaf spring mounted in the same way; the rears were instead formed by a de Dion , twin radius and a crossbow upper transverse. Both were fitted shock absorbers hydraulic Houdaille . The brakes were drum on all four wheels, while steering was worm and toothed . The traction was at the back , and the transmission was formed by a gearbox manual five more reverse gear ratios.

The frame was tubular steel . The body was Spyder two-seater, and it was by Scaglietti  .