The 1954 and 1955 seasons were the heyday of the four-cylinder Ferrari sports racer. The company hit its stride, earning the World Sportscar Championship in 1954 and contending in 1955 despite the legendary Mercedes-Benz team. The Ferrari sports car lineup at the beginning of 1954 was made up of the 2.0 L 500 Mondial and 3.0 L 750 Monza. The team replaced the Mondial with the 500 TR later that year, and feverishly worked to hold off Mercedes-Benz, developing the larger 857 S and six-cylinder 118 LM and 121 LM. The planned V12 sports racer family, including the 250 Monza of 1954 and planned 410 S of 1955, were less notable.

The early experiments with Lampredi's four-cylinder engine led to the creation of the famed 500 Mondial. Named to mark the world ("Mondial") championships won by Alberto Ascari, the 500 Mondial featured a 2.0 L version of Lampredi's four-cylinder engine in a small and light body with an advanced suspension. The car debuted on December 20, 1953 at the 12 Hours of Casablanca driven by Ascari and Luigi Villoresi, placing second to a 375 MM. 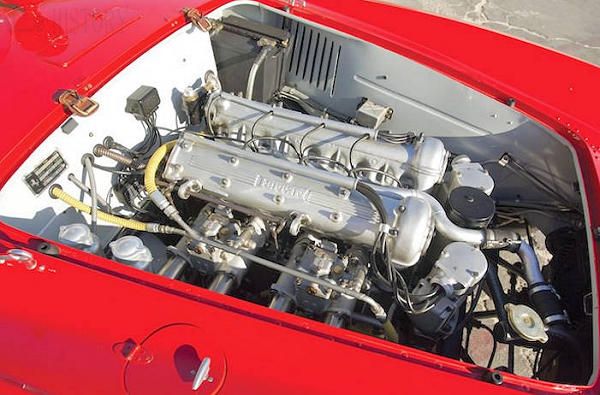 The first 500 Mondials were coupes bodied by Carrozzeria Scaglietti, but Pinin Farina later created a series of barchettas. The Mondial remained competitive through the end of the decade, including an entry in the 1957 Mille Miglia.

The frame was tubular steel . The suspension was independent with wishbones front while the back ones were formed by a De Dion axle and twin radius . The brakes were hydraulic drum , while the gearbox was a five-speed and reverse. The steering was worm and sector gear and the wheels were Borrani wire  .

The body ,made of aluminum  and was a spyder