The final Mondial evolution was 1989's Mondial t (Coupe and Cabriolet). It was a substantially changed model, "spearhead of a new generation of V8 Ferraris", according to Road & Track magazine. It was visually different from preceding Mondial models, the most recognisable being the redesign of the air intakes to a smaller, neater rectangular shape. Additionally, the door-handles were of a visually different design and the bumpers became body coloured.

The 't' called attention to the car's new engine/transmission layout: the previously-transverse engine was now mounted longitudinally whilst the gearbox remained transverse, thus forming a 't'. By adopting this layout, a longer engine could be mounted lower in the chassis, improving handling dramatically. The 't' configuration was used by Ferrari's Formula One cars of the 1980s, and would be the standard for the marque's future mid-engined V8 cars, beginning with the 348, introduced later in the year. The transverse manual gearbox was fitted with a Limited Slip Differential with a twin-plate clutch design with bevel gears driving the wheels. Later in production, a Semi-automatic transmission termed "Valeo" was available as an option; while shifting was by means of a traditional gear lever, the clutch was actuated automatically without a clutch pedal. The engine was up to 3.4 L (3405 cc) and 300 hp (224 kW). The engine was now controlled by Bosch Motronic DME 2.5 (later DME 2.7) electronic engine management that integrated EFI and ignition control into a single computer unit. Two of these were used in the car: one for each bank of the engine. Engine lubrication was upgraded to a dry-sump system. 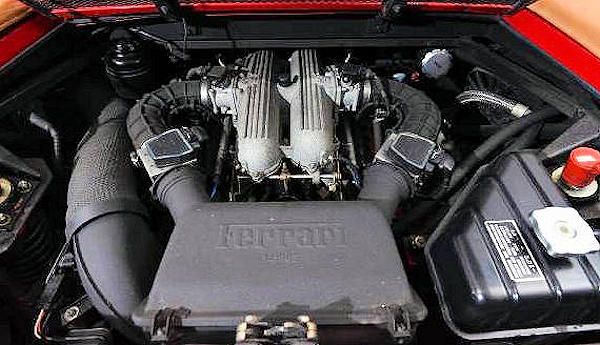 The Mondial's chassis would underpin a new generation of 2-seat Ferraris, right up to the 360, but the 2+2 Mondial would end production just four and a half years later in 1993. However, the "t" layout of the engine and transaxle, adapted from Ferrari's Formula One cars, continues to be used in mid-engined V8 model Ferraris to date, albeit with a more sophisticated chassis. The new layout saw the engine and transmission mounted on a removable subframe; the assembly could be removed through the underside of the vehicle for maintenance. This is necessary for timing belt replacement, making this a costly procedure for the owner who does not have a lift. On the other hand, the clutch was now located at the very rear of the drive train. This makes clutch replacement and service a simple, inexpensive, and readily owner-doable proposition.

The "t" was home to other Ferrari firsts: It used power assisted steering for the first time, and had a 3-position electronically controlled suspension for a variable trade off between ride quality and road holding. It also had standard ABS.

The Mondial t represented the most substantial upgrade to the Mondial model line in performance and handling since its introduction in 1980. Previous Mondials had rarely justified their price premium over the competition in terms of bare performance statistics, which led to some poor press coverage. The "t" offered greater performance whilst retaining a mid-engined layout and a practical packaging layout, and was more favorably received. It also had the advantage of two usable rear seats.

The company has not produced a mid-engined 2+2 car since then, leaving the 2+2 configuration to the more classic front-engined design starting with the 456 in 1992. As of 2012, the V12 FF along with the V8 California are the company's only 4-seat vehicle offerings, but both of these are front engined, leaving the Mondial t as the most modern 4-seat, mid-engined, Ferrari yet produced.

The Mondial based Ferrari PPG Pace Car was built exclusively for PPG Industries to use as a safety car for the PPG Indy Car World Series as part of its pace car program. Built by Ferrari under the design of I.DE.A Institute at a cost of approximately $1 million, it was introduced at the 1989 Champion Spark Plugs 300 in Laguna Seca.

"The Mondial T might be a four-seat GT car on paper, but it's still a mid-engined screaming Ferrari at Heart." -Terry Shea "Hemmings Sports & Exotic Car" August 2014 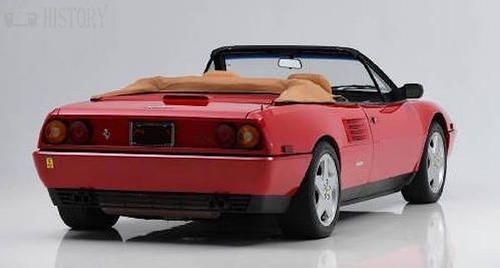