A recall was issued in 1995, regarding fuel hose fitting issues. Over 400 models had this defect which was caused by variances in temperature and environment. Another recall was issued in relation to the passive restraint system on seat belts not functioning properly, on over 2,000 512TR's. If the restraint system suffered a mechanical or electrical failure only the lap belt would provide the occupant protection.

The 512 TR's engine was modified in many ways. Nikasil liners were added, along with a new air intake system, Bosch engine management system, larger intake valves, and a revised exhaust system. In addition to the higher peak power, the modifications delivered a more broad power curve for better acceleration.

Gearshifting effort, long a complaint about the Testarossa, was eased with a new single-plate clutch, sliding ball bearings, and better angle for the shifter. The braking system included larger front rotors and cross-drilling all around. Quicker steering, lower-profile tires, and new shock settings improved handling. Most importantly, engine and gearbox position was rethought, which improved the centre of gravity, aiding the handling and making the car less fearsome on the limit.

The interior was revised too, with the center console split from the dashboard, and the climate controls relocated. Pininfarina tweaked the body of the car to better integrate the spoilers and engine cover and update the design in line with the recently released 348. 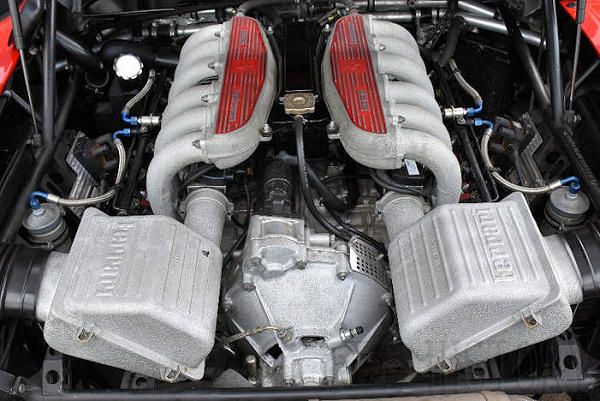