A Ferrari Berlinetta Boxer is one of a series of cars produced by Ferrari in Italy between 1973 and 1984. They used a mid-mounted flat-12 engine, replacing the FR layout Daytona, and were succeeded in the Ferrari stable by the Testarossa. It was designed by Leonardo Fioravanti.

No BB was ever originally sold in North America, as Enzo did not believe it to be worth the cost of complying with the extra environmental and safety regulations. However, third parties made conversions, and quite a few of them are now in the United States.

The 365 GT4 BB was updated as the BB 512 in 1976, resurrecting the name of the earlier Ferrari 512 racer. The name 512 referred to the car's 5 liter, 12 cylinder engine; a deviation from Ferrari's established practice of naming 12-cylinder road cars (as the 365 BB) after their cylinder displacement. The engine was enlarged to 4942 cc, with an increased compression ratio of 9.2:1. Power was slightly down to 360 hp, while a dual plate clutch handled the added torque and eased the pedal effort. Dry sump lubrication prevented oil starvation in hard cornering. The chassis remained unaltered, but wider rear tires (in place of the 365's equally sized on all four corners) meant the rear track grew 63 mm.

External differentiators included a new chin spoiler upfront, incorporated in the bumper. A NACA duct on the side provided cooling for the exhaust system. At the rear there were now twin tail lights and exhaust pipes each side, instead of triple units as on the 365 GT4 BB.

The Bosch K-Jetronic CIS fuel injected BB 512i introduced in 1981 was the last of the series. The fuel injected motor produced cleaner emissions and offered a better balance of performance and daily-driver temperament.

External differentiators from the BB 512 besides badging include a change to metric sized wheels and the Michelin TRX metric tire system, small white running lights in the nose, and red rear fog lamps outboard of the exhaust pipes in the rear valance.

Measurements are notoriously variable, inaccurate, and definitionally vague even from Ferrari-issued sources of the same period. For example, the workshop manual documents maximum speed (typically speed at redline) whereas the owner's manual documents «attainable» speed which appears to be speed at maximum HP per RPM not exceeding redline; for the 512 and 512i, this is likely not the maximum speed. Also, the workshop manual does not consistently distinguish measurements between the carbureted (512) and injected (512i) engines except with respect to the fuel delivery system, even though it is common knowledge that differences exist. 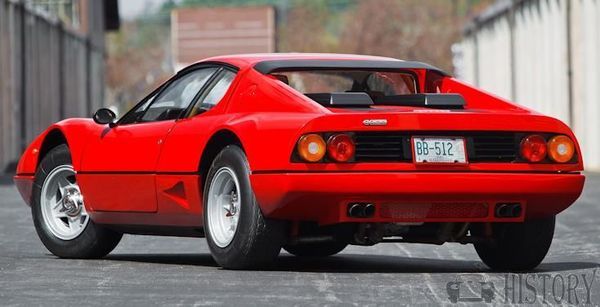