The Ferrari FXX is a high performance race car and prototype built by automobile manufacturer Ferrari in Maranello, Italy. The FXX is based on the street-legal Enzo. Production of the FXX began in 2005.

The FXX uses some technology developed from the Enzo Ferrari, and combines it with some new developments from Ferrari and its suppliers. However, the car is only a part of the overall program. Customers pay £2 million, but are only allowed to drive the car on special track days which are approved by Ferrari. After they drive the car, the owners are entitled to be briefed by Ferrari on the car's performance. Ferrari's sister company, Maserati, has developed a similar car, the MC12 Corsa. It is suspected that Ferrari closely guards the FXX due to the car incorporating various advanced technology from Ferrari's F1 team that the company did not want being inadvertently released to rivals.

An evolution of the Enzo, in essence, the FXX shares some components with the original car, but numerous, significant developments are unique to the FXX.

The gearbox incorporates the latest developments from Ferrari's F1 program and has a shift time of under 100 ms. The brake pads were also upgraded from the Enzo. It does, however, retain the Carbon fibre-reinforced Silicon Carbide (C/SiC) ceramic composite discs found on the Enzo. The tires are custom-developed 19 inch slicks.

The FXX features comprehensive data-monitoring and telemetry that not only allows the driver to improve performance, but also provides Ferrari technicians with valuable data to improve the FXX and future road-going Ferraris.

Ferrari has built 30, adding one special edition to the 29 that were originally planned. The original 29 have all been sold to pre-selected past Ferrari customers. The 30th was retained by Ferrari S.p.A. and presented to Ferrari's F1 World Champion driver, Michael Schumacher, when he retired from Formula One racing at the end of 2006. Schumacher's FXX differs from others in being black without a stripe, having red trimmed wheels, matte rather than chrome exhaust tips, and his personal logo stitched on the racing seats. 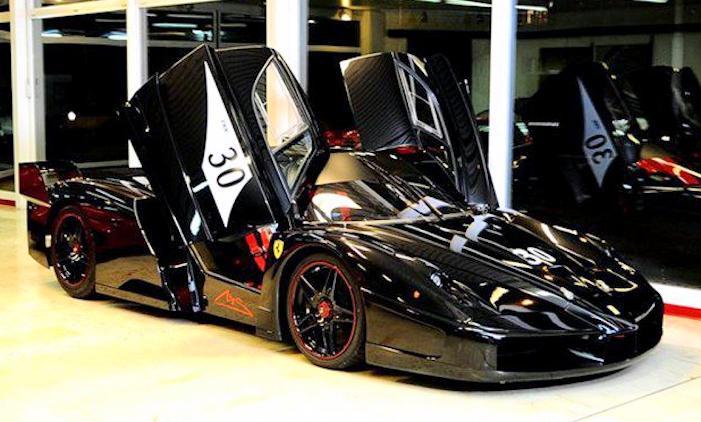 FXX owners also participate in Ferrari's testing and brand development programs. As part of the FXX programme, the car is maintained by the Ferrari factory. The purpose of this particular program is to allow Ferrari's top customers exclusive access to its most up-to-date technology and to utilize their input in the development of future models. The model was only sold in Europe. Units can be imported, but not owned, in any other continent. The FXX Evolution package was reported to cost 1.5 million euros (excluding taxes) (2.1 million USD), including the car, the crew and the services provided by Ferrari.

The Ferrari FXX program continued until 2009. The car continued to be improved under the Evolution kit, which continually adjusts specifics to create more power and quicker gear changes, and to lower the car's aerodynamic drag. The V12 engine generates 860 PS (630 kW; 850 hp) at 9500 rpm giving a theoretical top speed of 400 kilometres per hour (250 mph) which could be reached in under 40 seconds. The car also accelerates to 62mph 0–100 kilometres per hour (0–62 mph) in 2.5s. There were gearbox changes so that shift time should be reduced to 60 milliseconds per shift, a reduction of 20 milliseconds. The car also underwent aerodynamic changes and improvements to the traction control system.Statistically, this is Ferrari's fastest car ever released.

A black unstriped Ferrari FXX, owned by Michael Schumacher, was exhibited on the BBC's Top Gear show on 21 June 2009. Driven by Schumacher dressed as The Stig, the car completed a lap of Top Gear 's circuit in 1 minute and 10.7 seconds. The episode ended with the Ferrari FXX in first place on the board, beating the previous record (at that time) of 1 minute 17.1 seconds which was held by a Gumpert Apollo S. However, the record was removed from the power board by the production team the following week, after they realized the lap was completed on slick racing tires, which are not road-legal and that the car itself could not clear speed bumps (all cars on the board must be legal for street use).