The Ferrari 166 MM Berlinetta Le Mans was built only in 1950. Only 6 were produced. It was a car designed primarily for racing, and was an improvement of earlier models of the Ferrari 166, such as the 166 Barchetta. This “Berlinetta” design was a little heavier than previous models, but was supposed to perform better in high-speed races such as the Le Mans races. Ironically, the two cars that were entered in 1950 for the Le Mans did not finish.

The Ferrari 166MM Berlinetta was fitted the same chassis as the Ferrari 166 Barchettas. The bodies were crafted by Superleggera and were completely aluminum. This design of the chassis was created in 1937 by Aderloni. Small diameter tubing was gas welded to create the steel skeleton, which was later fastened to the car.

The front suspension was independent with a transverse leaf spring while the rear suspension had a live axle with leaf springs. Large drum brakes were placed on the wheels to better the stopping power, something that Ferrari would continue for several years. The engine received a boost from previous models, now producing 170 horsepower instead of 140. The Berlinetta was produced as a 2-door fastback coupe with a spark ignition 4 stroke V-12 engine. Just like all the other 166s, the car had a 3 carburettor set up. The berlinetta was rear wheel drive. It had a manual 5 speed transmission with a top speed of a 189 km/h, or 117 mph. The 0-60 mph time was 8.5 seconds.

Recent 166 Berlinettas that have been either sold at auction or featured in magazines include:

The Chassis number 0066M is equipped with the engine number 0066M. The car was finished in June 14, 1949. It was purchased by Anteo Allazetta of Trieste straight from the factory. The car originally had a single carburetor, but was later converted to a 3-carburetor setup to match the other 166m Berlinettas in 1950 so that it could be raced. Allazetta raced in the Trieste-Opicina Hill climb on June 21 of 1953. The car placed 1st in its class and 4th overall. It was then raced on July 12, 1953 in the Coppa d’Oro Dolomiti where the car placed second in its class and 5th overall in the race. In the Trieste-Opicinia Hill climb, the car placed fourth in class and 5th overall. The 166 Berlinetta was then sold in 1958 to David Francis Leopold in the United States. It was then purchased by George Smith of Cincinnati, Ohio, a year later and then sold again in 1961 to Donald Williams. Fred Leydorf then purchased the car and gave it a complete restoration along with an engine rebuild. In 1972, the 166 Berlinetta was sold to John R. Bond of California where it would be featured on the cover of Road and Track in the late 1970s. The car was then imported to Yokohama, Japan, after being bought by Tohru Horinouchi in 1984. Horinouchi also gave the car another complete, 4 year, restoration. It was then sold at the Gooding and Company auction in Pebble Beach, California. It sold for $2,200,000 in 2008.

The Chassis Number 020I was constructed by Colombo, Ferrari’s chief engineer. It was one of the first vehicles to actually have the name “Ferrari”. It was driven by Cortese Franco and was at its best when raced on tracks with many corners. It won its first Gran Prix in Rome, and its second race won in Vercelli. It then was damaged at the Terme di Caracalla and therefore could not race. However it was repaired and was able to race again, but this time Tazio Nuvolariwas behind the wheel. He won at the Forlio Circuit and at the Coppa Luigi Arcangeli in Parma. 020I suffered another accident in testing and was given a new body along with an engine replacement. The car originally had the chassis number “02C”, however at some point in time, the “C” was mistaken for an “O” and then an “I” was added, to create the serial number “020I”.

The Ferrari 166 Berlinetta with the chassis number 043S was first shown on May 14, 1950 at the XXXII Turin Motor Show. Later that year the factory sold it to its first owner, the Agency for Automobile and Spare Parts Trading where they later sold it to its first private owner, Mr. Moretti of Milan, Italy. In the 1980s, Ron Pinto of Rancho Palos Verdes, California had it exported from Italy to the United States. Mr. Pinto then showed it at the International Ferrari Concours at the Rancho Canada Golf Club in Carmel Valley, California on August 23, 1984. In 1986, Lyle Tanner purchased the car and then sold it the following year to Henk P.C. Van de Meene of the Netherlands. Mr. Van de Meene entered the car in the 1987 Ferrari Club Nederland meeting at Zandvoort. He then participated in the inaugural Italia a Zandvoort meeting on June 29, 1991. In July of 2008, it was shown at the Ferrari Owners Club England Annual Concours and at the Goodwood Revival Meeting under the ownership of Danny Donovan. The 166 was recently put up for auction in 2010 by RM Auctions but did not sell.

The Ferrari 166 Chassis number 0071S was one of ten cars with a Michelotti designed body. Giovanni Michelotti worked with Alfredo Vignale to design this body style for the 166. Michelotti would draw the design at a 1:1 scale, and then Vignale would work the drawing into aluminum sheets only using a wooden hammer, a tree stump, a flat mallet, a sack of sand, and an anvil and flat hammer. The Chassis 0071S was first sold to the Cerana brothers of Busto Arsizio on April 13, 1950. They later returned the car to the Ferrari factory in September 1951 so that the engine could be upgraded to Ferrari 195 Inter specifications. It was then sold to Edoardo Lualdi who then sold it to Carlos Menditeguy. Menditeguy then shipped it to Argentina where it was sold to Pablo Napoli of Buenos Asires where it was raced in many events. The 166 was then imported by Forristals GT cars in 1979 to the United States where it was sold to Ed Weschler, a well known American Collector. Weschler raced the car at the Chicago Historic Races in July 1987. Stephen Dudley then bought the car who raced it in numerous races, including the European and North American Ferrari Historic Challenge series, Mille Miglia, Tour Autos, Tour de Espana, Targa Florio Revival, e Ronde du Ventoux Hillclimb, Le Mans Classics, and Monaco Historiques. In 1998, the 166 00715 received the Best Unrestored Race Car Award. The only non-original parts are the fire system, fuel cell, and external ignition cut off. 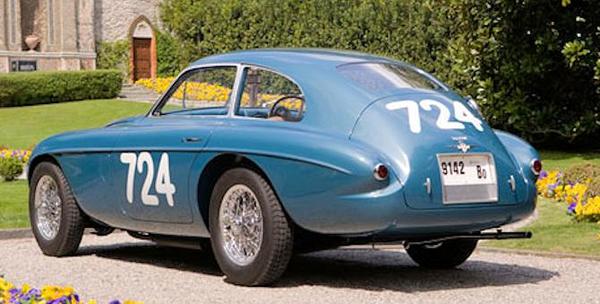