LaFerrari (also known by its project name, F150) is a limited production hybrid sports car built by Ferrari. The car and its name were officially unveiled at the 2013 Geneva Auto Show. It is based on findings from testing of the Ferrari FXX and on research being conducted by the Millechili Project at the University of Modena. Association with the Millechili Project led to speculation during development that the car would weigh under 1,000 kg (2,205 lb), but a dry weight of 1,255 kg (2,767 lb) was claimed. Only 499 units will be built, and each will cost more than £1 million ($1.69 million).

Ferrari states that the car has a top speed exceeding 350 km/h (217 mph), and that it is capable of reaching 100 km/h (62 mph) in under three seconds, 200 km/h (124 mph) in under seven seconds, and a speed of 300 km/h (186 mph) in 15 seconds. Ferrari also claim that the car has lapped its Fiorano Test Circuit in under 1 minute and 20 seconds which is faster than any other road-legal car Ferrari has ever produced.

LaFerrari received no input from Pininfarina, making it the first Ferrari since the Bertone-styled 1973 Dino 308 GT4 not to have Pininfarina bodywork or other styling. This decision is a rare exception to the collaboration between Ferrari and Pininfarina that began in 1951. However, Ferrari has stated that two new models designed jointly with Pininfarina are yet to be unveiled and that there are no plans to end business relations with Pininfarina.

The cockpit stands out for its essentiality and the sportiness of the shapes, intended to convey the high level of performance of this supercar. There is a steering wheel with integrated controls and gear levers directly fixed to the steering column, a solution that allows better use in all conditions. The "bridge" which exists between the two seats, designed like a suspended wing, is home to other instruments linked to the dual-clutch gearbox.
The instrumentation consists of a 12.3" TFT display with the option to choose between two layouts and can host data from the telemetry system.
The body computer system is developed by Magneti Marelli Automotive Lighting.

The FXX-K is a track-exclusive, non road-legal, variant of the LaFerrari, successor of the FXX, FXX Evo, 599XX and 599XX EVO. The car uses the same 6.3L V12 of the regular LaFerrari, but with 1035 HP, and uses the Kinetic Energy Recovery System (KERS or ERS-K) found in F1 cars. It includes 4 driving modes: Qualify (max performance on short distance), Long Run (for long distance driving), Fast Charge (for faster recharging of the battery) and Manual Boost, that uses all the power of the engine and batteries for maximum torque, cornering and speed. It has F1-based tech, including the E-Diff electronic differential, F1-Trac traction control and racing ABS brakes, all controlled from the center console (Manettino). Like the FXX and 599XX before it, the FXX-K is a part of Ferrari's Client Test Driver program, that allows owners of XX cars, to drive in special tracks, collecting data for use in future Ferrari road and race cars. The front of the car has a large splitter and twin-profile spoiler, the headlights are very small for improving aerodynamics. In the rear, the tail is higher and includes a mobile spoiler with a tailfin and a small wing in the end of each fin, that maximizes the downforce. Announced December 3 on Ferrari's home page, it was officially shown on Yas Marina Circuit on December 5, 2014. 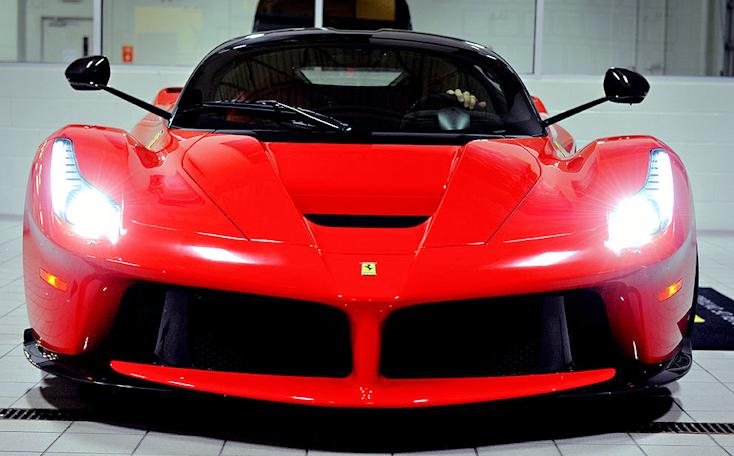