The Enzo Ferrari is a 12 cylinder mid-engine berlinetta supercar named after the company's founder, Enzo Ferrari. It was built in 2002 using Formula One technology, such as a carbon-fibre body, F1-style electrohydraulic shift transmission, and carbon fibre-reinforced silicon carbide (C/SiC) ceramic composite disc brakes. Also used are technologies not allowed in F1 such as active aerodynamics and traction control. After a downforce of 7600 N (1700 lbf) is reached at 300 km/h (186 mph) the rear wing is actuated by computer to maintain that downforce.

The Enzo's F140 B V12 engine was the first of a new generation for Ferrari. It is based on the design of the V8 found in Maserati's Quattroporte, using the same basic design and 104 mm (4.1 in) bore spacing. This design will replace the former architectures seen in V12 and V8 engines used in most other contemporary Ferraris. The 2005 F430 is the second Ferrari to get a version of this new powerplant.

The Enzo, named after the founder, was established to commemorate Ferrari's first formula one title of the new millennium.

The Enzo was designed by Ken Okuyama, the Japanese former Pininfarina head designer, and initially announced at the 2002 Paris Motor Show with a limited production run of 349 and at US $659,330. The company sent invitations to existing customers, specifically, those who had previously bought the F40 and F50. All 349 cars were sold in this way before production began. Later, after numerous requests, Ferrari decided to build 50 more Enzos, bringing the total to 399. Before being unveiled at the Paris Motor show, the Enzo (that was used in the show) was flown from Italy to California to be filmed in Charlie's Angels: Full Throttle. It was driven on a beach by actress Demi Moore. After filming was complete, the Enzo was flown to France to be in the Motor Show. Enzos are listed as being built in 2003. In 2004, a 400th Enzo was built and donated to the Vatican for charity, which was later sold at a Sotheby's auction for $1.1 million.

The Enzo has a semi-automatic transmission (also known as the F1 gearbox) using paddles to control an automated shifting and clutch mechanism, with LED lights on the steering wheel telling the driver when to change gears. The gearbox has a shift time of just 150 milliseconds. The transmission was a first generation "clutchless" design from the late 1990s, and there have been complaints about its abrupt shifting.

The Enzo has 4 wheel independent suspension with push-rod actuated shock absorbers which can be adjusted from the cabin, complemented with anti-roll bars at the front and rear.

The Enzo uses 19-inch (483 mm) wheels and has 15-inch (381 mm) Brembo disc brakes. The wheels are held by a single lug nut and fitted with Bridgestone Potenza Scuderia RE050A tires. 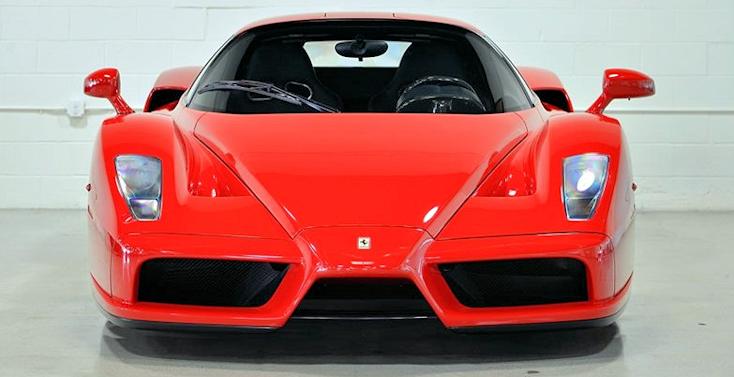 Despite the Enzo's extraordinary performance and price, the Ferrari 430 Scuderia (an improved version of Ferrari's standard F430 production car) is capable of lapping the Ferrari test track just as quickly as the Enzo.

Evo magazine tested the Enzo on the famed Nordschleife Circuit and ran a 7:25.21 lap time. The Enzo in the test had a broken electronic damper.

However, the Enzo was described as one of the "Fifty Ugliest Cars of the Past 50 Years", as Bloomberg Businessweek cited its superfluous curves and angles as too flashy, particularly the V-shaped hood, scooped-out doors, and bulbous windshield.

As the result of the Enzo, Ferrari has decided to use some of the technology developed for it in a small-scale program to get more feedback from certain customers for use in future car design as well as their racing program. The core of this program is the Ferrari FXX. It is loosely based on the Enzo's design with a highly tuned 6.3 litre version of the Enzo's engine putting out roughly 800 PS (590 kW; 790 hp). The gearbox is new as well as the tires (custom-designed for this car by Bridgestone) and the brakes (developed by Brembo). In addition, the car is fitted with extensive data-recording and telemetry systems to allow Ferrari to record the car's behavior. This information will be used by Ferrari to develop their future sports cars.

Like the Enzo, the car was sold to specially selected existing clients of Ferrari only. The initial price was €1.3 million. Unlike the Enzo, the clients did not take delivery of the car themselves. Rather, it is maintained by Ferrari and available for the client's use on various circuits as arranged by Ferrari and also during private track sessions. The car is not expected to be street-legal or suitable for road use.

The Ferrari FXX program was continued until 2008/2009 with the Ferrari FXX Evoluźione. The car will continue to be improved under the Evolution kit, which will continually adjust specifics to create more power, change gearing, and remove drag. The 6262 cc V12 engine will be pushing out 860 PS (630 kW; 850 hp) at 9500 rpm. There will be gearbox changes so that shift time will be reduced to 60 milliseconds per shift, a reduction of 20 milliseconds. The car will also undergo aerodynamic changes and improvements to the traction control system. Its top speed is 227 miles per hour (365 km/h).

Pininfarina had wanted to do a special one-off Enzo-based supercar and was looking for a backer. After sending out feelers to its clients, American Ferrari collector James Glickenhaus eventually agreed to back the project by commissioning the car as a modern homage to great Ferrari sports racing cars such as the 330 P3/4, 512 S, 312 P, and 333 SP on the last unregistered U.S.-spec Enzo chassis. The car was dubbed the Ferrari P4/5 by Pininfarina, and retains the Enzo's drivetrain and vehicle identification number. The car was unveiled at the 2006 Pebble Beach Concours d'Elegance and appeared in the September issue of Car and Driver. After its unveiling at Pebble Beach, the P4/5 returned to Europe for high speed testing, press days, and an appearance at the Paris Auto Show in September.

Upon seeing P 4/5, Luca di Montezemolo felt that the car deserved to be officially badged as a Ferrari and along with Andrea Pininfarina and James Glickenhaus agreed that its official name would be "Ferrari P 4/5 by Pininfarina". Ted West wrote an article in Car and Driver about how this came to be: "The Beast of Turin".

The Maserati MC12 is a two-seat mid-engined sports car derivative of the Enzo Ferrari developed by Maserati while under control of Ferrari. It was developed specifically to be homologated for racing in the FIA GT Championship, with a minimum requirement of 25 road versions to be produced before the car could be allowed to compete. Maserati built 50 units, all of which were presold to selected customers. A further variation, the MC12 Corsa is a track day car, similar to the Ferrari FXX.

The Maserati MC12 has the same engine, chassis and gearbox as the Enzo but the only externally visible component from the Enzo is the windshield. The MC12 is slower accelerating (0–100 km/h in 3.8 s) and has a lower top speed (330 km/h) or 208 mph and less drag coefficient (due to sharper nose and smoother curves) than the Enzo due to engine tuning. However, the MC12 has lapped race tracks faster than the Enzo before, specifically on the UK motoring show Top Gear, and the Nurburgring Nordschleife (at colder outside temperature). However this could be attributed to the MC12's Pirelli PZero Corsa tires which have more grip than the Enzo's Bridgestone Scuderias.

The Maserati Birdcage 75th is a concept car created by automobile manufacturer Maserati and designed by Pininfarina. It was first introduced at the 2005 Geneva Auto Show. It draws inspiration from the Maserati Tipo Birdcages of the 1960s and was made as a celebration of Pininfarina's 75th anniversary. It is an evolution of the Enzo's MC12 cousin.

The Maserati MC12 Corsa is a variant of the MC12 intended for racetrack use. In contrast to the race version of the MC12, of which street-legal versions were produced for homologation purposes, the MC12 Corsa is intended for private use, albeit restricted to the track, as the Corsa's modifications make it illegal to drive on the road.

The Corsa was developed directly from the MC12 GT1, which won the 2005 FIA GT Manufacturers Cup. The car was released in mid-2006, "in response to the customer demand to own the MC12 racing car and fueled by the growth in track days, where owners can drive their cars at high speeds in the safety of a race track", as stated by Edward Butler, General Manager for Maserati in Australia and New Zealand. In similar fashion to the Ferrari FXX, although the owners are private individuals, Maserati is responsible for the storage, upkeep, and maintenance of the cars, and they are only driven on specially organized track days. Unlike the FXX, Corsas are not used for research and development, and are used only for entertainment. A single MC12 Corsa has been modified by its owner to make it street-legal.

Only twelve MC12 Corsas were sold to selected customers, each of whom paid €1 million (US$1.47 million) for the privilege. Another three vehicles were produced for testing and publicity purposes. The Corsa shares its engine with the MC12 GT1; the powerplant produces 755 PS (555 kW; 745 hp) at 8000 rpm, 122 PS (90 kW; 120 hp) more than the original MC12. The MC12 Corsa shares the GT1's shortened nose, which was a requirement for entry into the American Le Mans Series. The car was available in a single standard color, named "Blue Victory", though the car's paint could be customized upon request. The MC12 Corsa possesses steel/carbon racing brakes, but is not fitted with an anti-lock braking system.

Millechili, Italian for one thousand (mille) kilograms (chili), is the code name for a sports car to be manufactured by Ferrari. It will be a lightweight version of the Enzo Ferrari that will borrow features from Formula One race cars, using the F430's aluminum space frame on a 104.3-inch (2,650 mm) wheelbase. The V10 engine will exceed 600 hp (447 kW). Production of around 300 cars was slated for 2010, with a base price of around US$500,000.

Millechili is developed in collaboration with University of Modena and Reggio Emilia, faculty of Mechanical Engineering. Millechili Lab is a cross-project in which students are working on light-weight car design.

The Ferrari FXX program was continued until 2009. The car will continue to be improved under the Evolution kit, which will continually adjust specifics to create more power, change gearing, and lower the aerodynamic drag. The V12 engine will generate 860 PS (630 kW; 850 hp) at 9500 rpm, which boosts the top speed to over 420 km/h (261 mph), and the acceleration to 0–100 km/h in 2.5 seconds. There will be gearbox changes so that shift time will be reduced to 60 milliseconds per shift, a reduction of 40 milliseconds. The car will also undergo aerodynamic changes and improvements to the traction control system. The FXX program also gave rise to the 599XX program in late 2009. The 599XX, a racing version of the 599 GTB, borrows technology which was developed from the FXX. The 599XX is faster than the Enzo and is able to lap the Fiorano circuit 1.2 seconds faster than the Enzo. Edo Competition transformed a stock Enzo into a FXX Evoluzione in 2012 for a client in Calgary. 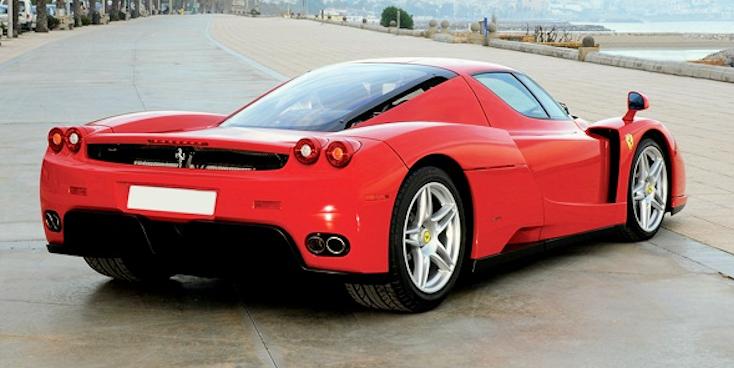