The Ferrari 458 is a mid-engined sports car produced by the Italian sports car manufacturer Ferrari. The 458 replaced the Ferrari F430, and was first officially unveiled at the 2009 Frankfurt Motor Show.

In Ferrari's first official announcement of the car, the 458 was described as the successor to the F430 but arising from an entirely new design, incorporating technologies developed from the company's experience in Formula 1. 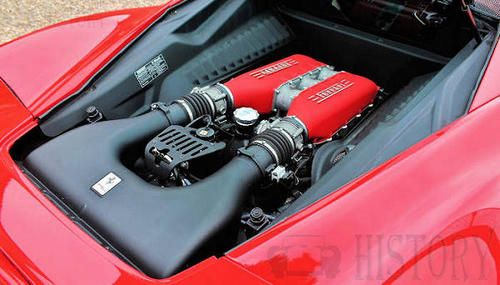 The only transmission available on the 458 is a dual-clutch 7-speed GETRAG gearbox, in a different state of tune shared with the Mercedes-Benz SLS AMG.There is no traditional manual option, making this the fourth road-car after the Enzo, Challenge Stradale and 430 Scuderia not to be offered with Ferrari's classic gated manual. It is the first mainstream model to not be offered with a manual transmission.

The car's suspension features double wishbones at the front and a multi-link setup at the rear, coupled with E-Diff and F1-Trac traction control systems, designed to improve the car's cornering and longitudinal acceleration by 32% when compared with its predecessors.

The brakes include a prefill function whereby the pistons in the calipers move the pads into contact with the discs on lift off to minimize delay in the brakes being applied.This combined with the ABS and standard Carbon Ceramic brakes have caused a reduction in stopping distance from 100–0 km/h (62-0 mph) to 32.5 metres (107 ft). Tests have shown the car will stop from 100 km/h (62.1 mph) in 90 feet (85 with run flat tires), 85 feet from 60 mph (97 kmph) and 80 feet from 60 mph (97 kmph) with run flat tires.

The adaptive magnetorheological dampers are co-developed with BWI Group.

In keeping with Ferrari tradition the body was designed by Pininfarina. The car’s exterior styling and features were designed for aerodynamic efficiency, producing a downforce of 140 kg (309 lb) at 124 miles per hour (200 km/h). In particular, the front grille features deformable winglets that lower at high speeds, in order to offer reduced drag. The car's interior was designed using input from former Ferrari Formula 1 driver Michael Schumacher; in a layout common to racing cars, the new steering wheel incorporates many controls normally located on the dashboard or on stalks, such as turning signals or high beams.

According to British car magazine Autocar, the 458 Italia's design has drawn inspiration from the Enzo Ferrari and its Millechili concept car. It has been designed to be Ferrari's sportiest V8-engined car, to distinguish itself from the recently launched Ferrari California.

The 458 was also reviewed on 15th season of Top Gear, where it received acclaim for its styling and performance. In a drag race against James May's Ferrari F430, it won by a considerable margin. The car also lapped the Top Gear test track in 1:19.1, just 0.1 second slower than the Ferrari Enzo.

The 458 Italia is the two-seat berlinetta 458. It was the first variant to be officially unveiled to the public, at the 2009 Frankfurt Motor Show on 15 September 2009.

It is a limited (20 units) version of 458 Italia for the Chinese market, commemorating 20th anniversary of Ferrari in China since the first Ferrari, a 348 TS, was ordered in Beijing. It is distinguished by its Marco Polo Red body colour, golden dragon graphic on the front bonnet, gold and black livery stripes symbolising a racing track, gold painted wheels, gold aeroelastic winglets, gold embroidery on the car's head rests, engine start button inscribed with the simplified Chinese characters for 'start' and a '20th Anniversary Special Edition' plaque in dash.

The vehicle was unveiled in Italia Center of Shanghai World Expo Park.

The 458 Spider was premiered at the 2011 Frankfurt Motor Show. This convertible variant of the 458 Italia features an aluminium retractable hardtop which, according to Ferrari, weighs 25 kilograms (55 lb) less than a soft roof such as the one found on the Ferrari F430 Spider, and can be opened in 14 seconds. The engine cover has been redesigned to accommodate the retractable roof system. Ferrari plans to make 1,500-2,000 458 Spiders every year. It has the same 0–100 km/h time as the hard-top but has a lower top speed 199 mph (320 km/h).

The 458 Speciale is the top performing 458 Italia. Distinctions of the Speciale are the new forged wheels, vented bonnet, finned side sills, taller rear spoiler and redesigned bumpers, which include active aerodynamics designed by Ferrari Styling Centre in cooperation with Pininfarina; front and rear movable flaps balance downforce and cut drag at speed. The engine was revised, with power increased to 605 PS (445 kW; 597 hp) at 9,000 rpm, 540 N·m (398 lb·ft) of torque at 6,000 rpm. Electronic systems were updated too, introducing side slip angle control (SSC) to improve car control on the limit. SSC performs instant-to-instant analysis of the car’s side slip, comparing it with the target value and then optimising both torque management (via integration with F1-Trac traction control) and torque distribution between the two wheels (via integration with the E-Diff electronic differential). The weight/power ratio (1,290 kg dry, 1,395 kg at the kerb, 90 less than the standard 458) is equal to 2.13 kg/cv, sprints from 0 to 60 mph in just three seconds (0-125 mph in 9.1 seconds with a response time of just 0.060 seconds). Ferrari declared a Fiorano test track lap time of 1:23.5, only 0.5 seconds slower than the F12berlinetta. Lateral acceleration now reaches 1.33 g.

The vehicle was unveiled in 2013 at the Frankfurt Motor Show.

The 458 Speciale A is a spider variant for the 458 Speciale. The 'A' stands for 'Aperta', which is Italian for 'open' – and it is limited to only 499 examples. The Aperta has a 4.5 liter naturally aspirated V8 which produces 597 horsepower and 398 pound feet of torque. 0-60 mph takes only 3.0 seconds and it is capable of a top speed of 202 mph. It is the most powerful, street-legal, naturally aspirated V8 Ferrari has ever launched in a spider variant.

On 24 August 2010, BBC News reported that ten 458s had either crashed or caught fire in just three months. Ferrari responded later that it was aware of the fire-related cases, and was in the process of investigating them.

On September 1, 2010 Ferrari officially recalled all 1,248 of the 458s sold to date. A spokesman commented that the problem had been traced to adhesive used in the wheel-arch assemblies and that, in certain circumstances, the glue could begin to overheat, smoke and even catch fire. In extreme cases the melting adhesive could lead to the heat shield deforming, and hence moving closer to the exhaust, causing the wheel-arch lining to catch fire. Owners who had reported fires, that were later confirmed by independent engineers to be due to this problem, will now receive a new car. All other cars will be modified replacing the adhesive with mechanical fasteners.

In 2012, Ferrari recalled certain 2011 and 2012 cars because the engine can seize suddenly and possibly cause a crash. The F136 engines have crankshafts that were machined incorrectly. The automaker learned of one such incident from a review car lent to critics. Owners can choose from having a new engine installed by their dealer, having the engine removed and the work done by Ferrari North America or having a new crankshaft and bearings installed at the dealership.