The Ferrari F40 is a mid-engine, rear-wheel drive, two-door coupé sports car built from 1987 to 1992. The successor to the Ferrari 288 GTO, it was designed to celebrate Ferrari's 40th anniversary and was the last Ferrari automobile personally approved by Enzo Ferrari. At the time it was the fastest, most powerful, and most expensive car that Ferrari sold to the public.

As early as 1984, the Maranello factory had begun development of an evolution model of the 288 GTO intended to compete against the Porsche 959 in FIA Group B. However, when the FIA brought an end to the Group B category for the 1986 season, Enzo Ferrari was left with five 288 GTO Evoluzione development cars, and no series in which to campaign them. Enzo's desire to leave a legacy in his final supercar allowed the Evoluzione program to be further developed to produce a car exclusively for road use.

Power came from an enlarged, 2.9 L (2936 cc) version of the GTO's twin IHI turbocharged V8 developing 485 PS (357 kW; 478 hp) under 110 kPa (16 psi) of boost. The F40 did without a catalytic converter until 1990 when US regulations made them a requirement for emissions control reasons. The flanking exhaust pipes guide exhaust gases from each bank of cylinders while the central pipe guides gases released from the wastegate of the turbochargers. Engines with catalytic converters bear F120D code.

The suspension setup was similar to the GTO's double wishbone setup, though many parts were upgraded and settings were changed; the unusually low ground clearance prompted Ferrari to include the ability to raise the vehicle's ground clearance when necessary.

The body was an entirely new design by Pininfarina featuring panels made of kevlar, carbon fiber, and aluminum for strength and low weight, and intense aerodynamic testing was employed (see below). Weight was further minimized through the use of a plastic windshield and windows. The cars were not for the faint of heart; although the cars did have air conditioning, they had no sound system, door handles, glove box, leather trim, carpets, or door panels. The first 50 cars produced had sliding Lexan windows, while later cars were fitted with normal windows that could be rolled down.

The F40 was designed with aerodynamics in mind. For speed the car relied more on its shape than its power. Frontal area was reduced, and airflow greatly smoothed, but stability rather than terminal velocity was a primary concern. So too was cooling as the forced induction engine generated a great deal of heat. In consequence, the car was somewhat like an open-wheel racing car with a body. It had a partial undertray to smooth airflow beneath the radiator, front section, and the cabin, and a second one with diffusers behind the motor, but the engine bay was not sealed. Nonetheless, the F40 had an impressively low Cd of 0.34 with lift controlled by its spoilers and wing.

The factory never intended to race the F40, but the car saw competition as early as 1989 when it debuted in the Laguna Seca Raceway round of the IMSA, appearing in the GTO category, with a LM evolution model driven by Jean Alesi, finishing third to the two faster spaceframed four wheel drive Audi 90 and beating a host of other factory backed spaceframe specials that dominated the races. Despite lack of factory backing, the car would soon have another successful season there under a host of guest drivers such as Jean-Pierre Jabouille, Jacques Laffite and Hurley Haywood taking a total of three second places and one third.

Although the F40 would not return to IMSA for the following season, it would later be a popular choice by privateers to compete in numerous domestic GT series including JGTC. In 1994, the car made its debut in international competitions, with one car campaigned in the BPR Global GT Series by Strandell, winning at the 4 Hours of Vallelunga.

In 1995, the number of F40s climbed to four, developed independently by Pilot-Aldix Racing (F40 LM) and Strandell (F40 GTE, racing under the Ferrari Club Italia banner), winning the 4 Hours of Anderstorp. No longer competitive against the McLaren F1 GTR, the Ferrari F40 returned for another year in 1996, managing to repeat the previous year's Anderstorp win, and from then on it was no longer seen in GT racing.

The F40 Competizione is a non-sponsored, more powerful version of the F40 LM cars that were being raced, which was the result of consumer requests following the order of a French importer who wanted to enter one in the 24 Hours of Le Mans. 10 examples were built, the first two being called F40 LM's, and the remaining 8 being F40 Competizione, as Ferrari felt that the LM tag was too restrictive.

A F40 Competizione can be found today in the Automobile Museum of Turin.

The F40 was discontinued in 1992, and in 1995 the F50 was intended to be its successor in GT1 racing; but only three racing F50s were produced and none ever actually competed in a race.

As the best car ever produced by Ferrari until 1995, the F40 was very successful and sold over 1000 units. The "F40" name was modified in 1995 to "F50", with a completely different body and engine (it was a V12, rather than V8). Although only 349 were built, F50 and its predecessors were one of the best cars in the world. The F50 name disappeared in 1997, replaced by Enzo in 2002, whose production was ended in 2004, and was in turn replaced by LaFerrari in 2013. Originally, F50 had no direct successor, but its name successor was introduced in 2014, the F60 America, for celebrating 60 years of Ferrari in North America. However, it has no similarities with the F40 or F50 in appearance.

The F40 was the first road legal production car to break the 200 mph (320 km/h) barrier. From its introduction in 1987 until 1989, with its only competitors being the Porsche 959 and the 1988 Lamborghini Countach, it held the record as the world's fastest production car, with a top speed of 201.4 mph (324 km/h). During the 2006 Bonneville Speed Week, Amir Rosenbaum of Spectre Performance managed to take his F40 with small boost and air intake modifications to 226 miles per hour (364 km/h).

On Top Gear, Richard Hammond and Jeremy Clarkson both refer to the F40 as the "greatest supercar the world had ever seen". Clarkson also said the F40 is one of the most beautiful cars ever made. In series 16, episode 6, Hammond compared the F40 against its main rival, the Porsche 959. However, they never completed a lap on the Test Track, as the F40 failed to start and the 959 had problems with the turbos. 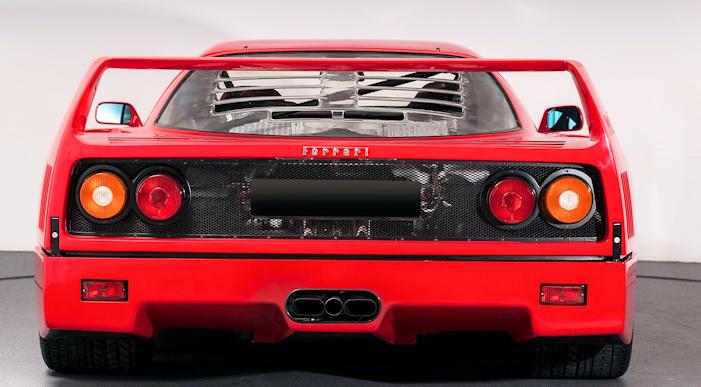