The Ferrari GTO (often referred to as Ferrari 288 GTO) is an exotic homologation of the Ferrari 308 GTB produced from 1984 through 1987, designated GT for Gran Turismo and O for Omologato (homologated in Italian).

The Ferrari GTO was built to compete in the new Group B Race series and a minimum of 200 cars were required for homologation. However, after the death of Henri Toivonen and his co-driver Sergio Cresto in the 1986 Tour de Corse, the FIA disestablished the class, leaving just the Group A Rally championship. As a result, the 288 GTO never raced and all 272 cars built remained purely road cars.

The GTO was based on the mid-engined, rear wheel drive 308 GTB (which has a 3.0 litre V8 engine). The "288" refers to the GTO's 2.8 litre V8 engine as it used a de-bored (by 1 mm) V8 with twin IHI turbochargers, intercoolers, and Weber-Marelli fuel injection. The 2855 cc engine capacity was dictated by the FIA's requirement for a Turbocharged engine's capacity to be multiplied by 1.4. This gave the GTO a theoretical engine capacity of 3997 cc, just under the Group B limit of 4.0 litres.

Ferrari also built five 288 GTO Evoluzione models with more aggressive and aerodynamic body styling and increased power. The engine in the 288 GTO Evoluzione originally put out as much as 650 hp (480 kW). With weight of 940 kg (2,072 lb) the car had a top speed of 225 mph (362 km/h). These cars form the clearest visual link between the 288 GTO and the F40 soon to follow.

All five are still in existence with one owned by the Factory on display in the engine manufacturing facility in Maranello. 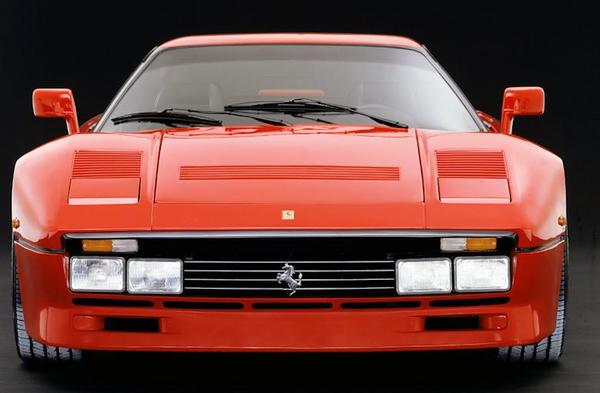