Although the incorporation of an automatic transmission and U.S. emissions compliance, indicate it may have been designed for the American market, no version of these grand tourers was ever officially imported to the USA. Despite this, many have been brought to America as grey imports.

In true Ferrari tradition the car was styled by Pininfarina. Its three-box design was a clear departure from its fastback predecessor, the 365 GTC/4. Following the Daytona, the GT4 2+2 was the second Ferrari to feature the characteristic design feature of a swage line dividing the body into an upper and a lower half.

The tubular steel chassis was based on that of the GTC/4, but the wheelbase was lengthened 200 mm (7.9 in) to 2,700 mm (106.3 in). The bodies were steel, with a fiberglass floor; they were manufactured by Pininfarina at its Turin plant, then shipped fully finished to Modena where Ferrari assembled the cars. Suspension consisted of double wishbones, coil springs coaxial with the shock absorbers, and anti-roll bars all around; the rear axle featured an hydraulic self-levelling system. Under the bonnet there was a Tipo F 101 Colombo V12 that underwent many changes through the years. It was an alloy head and block, four overhead cams, 24-valve unit using wet sump lubrication. The transmission was conventionally coupled directly to the engine, as on the GTC/4, with a driveshaft connecting it to the rear limited slip differential. The steering was servo-assisted. Brakes were discs on all four wheels.

Just a year after the launch of the GTC/4, a new 2+2 debuted at the Paris Motor Show: the 365 GT4 2+2. The name refers to the single cylinder displacement (365 cc), four overhead camshafts (GT4) and seat configuration (2+2). Most of the mechanicals, including the 4,390 cc (4.39 L; 268 cu in) engine, were carried over from its predecessor. The V12 used six side-draft Weber 38 DCOE 59/60 carburetors and produced 320 PS (240 kW; 320 bhp) at 6200 rpm. The gearbox was a five-speed, all-synchromesh manual with a single-plate clutch. Five-spoke alloy wheels were mounted on Rudge knock-off hubs; Borrani wire wheels were still offered at extra cost. Fittingly for a large grand tourer, standard equipment included leather upholstery, electric windows and air conditioning. The GT4 was replaced in 1976 by the nearly identical looking Ferrari 400. 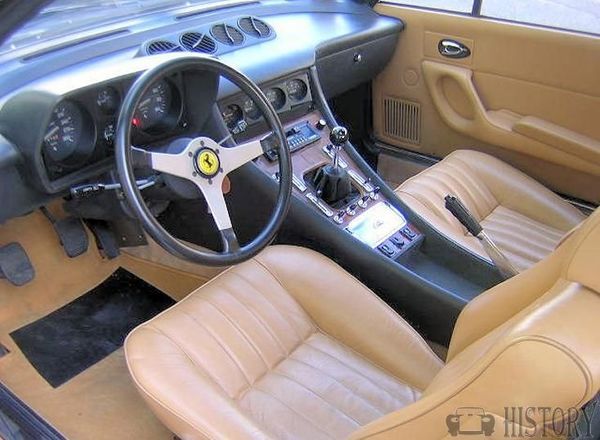