The Ferrari Testarossa (Type F110) is a 12-cylinder mid-engine sports car manufactured by Ferrari, which went into production in 1984 as the successor to the Ferrari Berlinetta Boxer. The Pininfarina-designed car was originally produced from 1984 to 1991, with two model revisions following the ending of Testarossa production and the introduction of the 512 TR and F512 M which were produced from 1992 to 1996. Almost 10,000 Testarossas, 512 TRs, and F512 Ms were produced, making it one of the most-produced Ferrari models, despite its high price and exotic design. In 1995, the F512 M retailed for $220,000 (£136,500).

The Testarossa is a two-door coupé that premiered at the 1984 Paris Auto Show. All versions of the Testarossa had the power fed through the wheels from a rear-mounted, five-speed manual transmission. The Rear mid-engine, rear-wheel drive layout (engine between the axles but behind the cabin) keeps the centre of gravity in the middle of the car, which increases stability and improves the car's cornering ability, and thus results in a standing weight distribution of 40% front: 60% rear. The original Testarossa was re-engineered for 1992 and released as the 512 TR, at the Los Angeles Auto Show, effectively as a completely new car,and an improved weight distribution of 41% front: 59% rear. The F512 M was introduced at the 1994 Paris Auto Show.The car dropped the TR initials and added the M which in Italian stood for modificata, or translated to modified, and was the final version of the Testarossa, and continued its predecessor's weight distribution improvement of 42% front: 58% rear The F512 M was Ferrari's last mid-engine 12-cylinder car, apart from the F50, Ferrari Enzo and LaFerrari, featuring the company's last flat engine. The Testarossa was replaced in 1996 by the front-engined 550 Maranello coupé.

The vehicle should not be confused with the Ferrari TR "Testa Rossa" of the late 1950s and early 1960s, which were GT sports cars that ran in the World Sportscar Championship, including the 24 Hours of Le Mans.

The Testarossa name, which means "red head" in Italian, comes from the red-painted cam covers on the flat-12 engine. The double entendre with a red-headed woman was intentional – Ferrari and Pininfarina regularly use descriptive terms related to a female's body when describing the style of their automobiles. 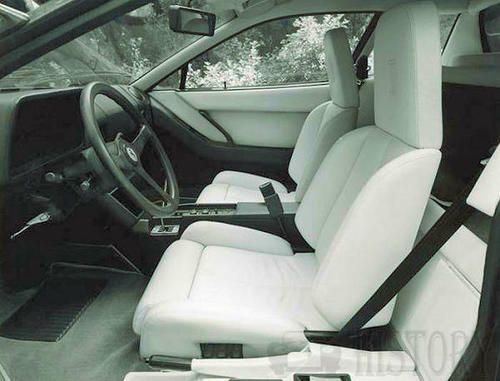 The Testarossa can trace its roots back to the faults of the 1981 512i BB. The problems that the Testarossa was conceived to fix, included a cabin that got increasingly hot from the indoor plumbing that ran between the front-mounted radiator and the midships-mounted engine and a lack of luggage space.To fix these problems Ferrari and Pininfarina designed the Testarossa to be larger than its predecessor, the Berlinetta Boxer. For instance, at 1,976 millimetres (78 in) wide the Testarossa was half a foot wider than the Boxer. This resulted in an increased wheelbase that stretched about 64 mm (2.5 in) to 2,550 mm (100 in) which was used to accommodate luggage in a carpeted storage space under the front forward-opening hood. The increase in length created extra storage space behind the seats in the cabin. Headroom was also increased with a roofline half an inch taller than the Boxer.

The spectacular design came from Pininfarina. The design team at Pininfarina consisted of Ian Cameron, Guido Campoli, Diego Ottina and Emanuele Nicosia. With little surprise, they were led by design chief Leonardo Fioravanti, the maestro behind many beautiful Ferraris. The design was originated by Nicosia, but the guidance of Fioravanti was equally important. Being a trained aerodynamist, Fioravanti applied his know-how to set the aerodynamics layout of the car. This meant the large side intakes were not only a statement of style but actually functional – they drew clean air to cool the side radiators and then went upward and left the car through the ventilation holes located at the engine lid and the tail. As a result, the Testarossa did not need a rear spoiler like Lamborghini's Countach yet produced zero lift at its rear axle. The aerodynamic drag coefficient of 0.36 was also significantly better than the Lamborghini's 0.42.

Pininfarina's body was a departure from the curvaceous boxer—one which caused some controversy. The side strakes sometimes referred to as "cheese graters" or "egg slicers," that spanned from the doors to the rear fenders were needed for rules in several countries outlawing large openings on cars. The Testarossa had twin radiators in the back with the engine instead of a single radiator up-front. In conjunction the strakes provided cool air to the rear-mounted side radiators, thus keeping the engine from overheating. The strakes also made the Testarossa wider at the rear than in the front, thus increasing stability and handling.

One last unique addition to the new design was a single high mounted rear view mirror on the driver's side. On US based cars, the mirror was lowered to a more normal placement in 1987 and quickly joined by a passenger side rear view mirror for the driver to be able to make safe easy lane changes.

Like its predecessor, the Testarossa used double wishbone front and rear suspension systems. Ferrari improved traction by adding 10-inch-wide alloy rear wheels. The Testarossa drivetrain was also an evolution of the BB 512i. Its engine used near identical displacement and compression ratio, but unlike the BB 512i had four-valve cylinder heads that were finished in red.

When introduced for the 1985 model year, the Testarossa had magnesium single bolt "knockoff" wheels with a 16.33 inch (415mm) diameter. These wheels used the Michelin TRX system, and the odd diameter size makes it impossible to fit standard tires. These wheels could only be fitted with TRX tires size 240/45 VR 415 for the front and TRX 280/45 VR 415 for the rear.

The original rear suspension consisted of independent, unequal-length wishbones, coil springs, twin telescopic shock absorbers on each side, and an anti-roll bar. The entire drivetrain and suspension was designed to be removed as a unit from underneath the car so the engine timing belts could be serviced.

In the 1988.5 model, the suspension was redesigned and the wheels were changed again from the single bolt knockoff setup to the standard Ferrari five bolt pattern. The wheel design still resembled the ones installed at the Testarossa's debut.

Jack Nerad of Driving Today states, the Testarossa "... [was] a car designed and built to cash in on an image. And since cashing in was what the Eighties were all about, it was the perfect vehicle for its time. The saving grace was, it was also a damn good automobile."

Although successful on the road, the Testarossa did not appear on race tracks, unlike the BB 512i, which had done so with minor success.

As Ferrari's range-topper during the 1980s, the car made numerous appearances in pop culture, most notably in the arcade game OutRun, and in the third season of Miami Vice. The car has subsequently become synonymous with 1980s "yuppies" and is an icon of 1980s retro culture. Its side strakes have become a popular aftermarket body component for wide arch aesthetic body kits. The strakes spawned knock-off treatments that were designed for cars such as the Pontiac Fiero and a wide variety of Japanese and American sporty cars and motorcycles such as the Honda VFR.

The Testarossa Spider, serial number 62897, is the sole official convertible variant of the Testarossa commissioned by Ferrari and designed by Pininfarina to be built. The car was specially made for the late Gianni Agnelli, head of Fiat at the time, as a gift. The Testarossa Spider had a silver exterior, a white magnolia leather interior with a dark blue stripe running above the matte black sills, and a white top that could be manually stowed away. The vehicle was delivered to Agnelli in 1986, and had a solid silver metal Ferrari logo on the hood instead of an aluminium one. The silver theme refers to elemental silver's periodic table abbreviation, Ag, the first two letters of Agnelli's name.

Many customers requested their own Testarossa Spider, but Ferrari declined every one of them for spatial and structural challenges that would be a challenge to resolve,and so Pininfarina and other conversion firms had to make unofficial Spider conversions. The official Spider was no different mechanically than the normal Testarossas available in the European market. It had a standard 4.9 L 291 kilowatts (396 PS; 390 hp) flat-12 engine. The only difference, other than being a convertible, was that the Spider's front window and door windows were both shorter than those of the normal car. 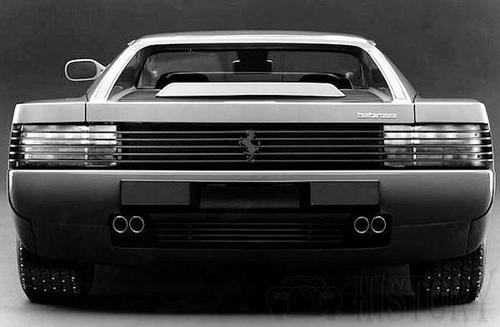