The Ferrari 328 GTB and GTS (Type F106) was the successor to the Ferrari 308 GTB and GTS. While largely based on the 308 GTB and GTS respectively, small modifications were made to the body style and engine, including an increase in engine displacement to 3.2 L (3185 cc). 7,400 Ferrari 328s were produced by the time the model was replaced by the new 348 in 1989, bringing the total for the 308/328 generation to nearly 20,000. The 328 is considered by some Ferrari enthusiasts to be one of the most reliable Ferraris; unlike some models, most engine maintenance can be performed without lowering the engine from the vehicle.

The 328 GTS model, together with the fixed roof 328 GTB, were the final developments of the normally aspirated transverse V8 engine 2-seat series. The 328 figures in the model title referred to the total cubic capacity of the engine, 3.2 litres, and 8 for the number of cylinders. The new model was introduced at the 1985 Frankfurt Salon alongside the Mondial 3.2 series.

Essentially the new model was a revised and updated version of the 308 GTS, which had survived for eight years without any radical change to the overall shape, albeit with various changes to the 3-litre engine. The 328 model presented a softening of the wedge profile of its predecessor, with a redesigned nose that had a more rounded shape, which was complemented by similar treatment to the tail valance panel. The revised nose and tail sections featured body colour bumpers integral with the valance panels, which reflected the work done concurrently to present the Mondial 3.2 models, with which they also shared a similar radiator grille and front light assembly layout. Thus all the eight-cylinder cars in the range shared fairly unified front and rear aspects, providing a homogeneous family image. The exhaust air louvres behind the retractable headlight pods on the 308 series disappeared, coupled with an increase in the size of the front lid radiator exhaust air louvre, which had been introduced on the 308 Quattrovalvole models, whilst a new style and position of exterior door catch was also provided. The interior trim also had a thorough overhaul, with new designs for the seat panel upholstery and stitching, revised door panels and pulls, together with more modern switchgear, which complemented the external updating details. Optional equipment available was air conditioning, metallic paint, Pirelli P7 tyres, a leather dashboard, leather headlining to the removable roof panel plus rear window surround, and a rear aerofoil (standard on Japanese market models). 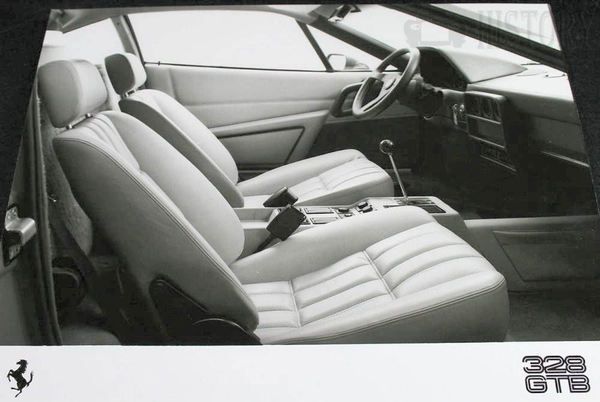 In the middle of 1988 ABS brakes were made available as an option, which necessitated a redesign of the suspension geometry to provide negative offset. This in turn meant that the road wheel design was changed to accommodate this feature. The original flat spoke "star" wheels became a convex design, in the style as fitted to the 3.2 Mondial models, whether ABS was fitted or not.

The main European market 328 GTS models had a tubular chassis with a factory type reference F 106 MS 100. Disc brakes, with independent suspension via wishbones, coil springs, and hydraulic shock absorbers, were provided all round, with front and rear anti roll bars. There were various world market models, each having slight differences, with right and left hand drive available.

The V8 engine was essentially of the same design as that used in the 308 Quattrovalvole model, with an increase in capacity to 3185 cc, with a bore and stroke of 83 mm (3.3 in) x 73.6 mm (2.9 in), and a type reference number F 105 CB 000. The engine retained the Bosch K-Jetronic fuel injection system of its predecessor, but was fitted with a Marelli MED 806 A electronic ignition system, to produce a claimed power output of 270 bhp (201 kW; 274 PS) at 7000 rpm. As with the preceding 308 models the engine was mounted in unit with the all synchromesh five-speed manual transmission assembly, which was below, and to the rear of the engine's sump.

The 328 GTS continued in production for four years, until replaced by the 348 ts model in the autumn of 1989, during which time 6068 examples were produced in the chassis number range of 59301 to 83136, the GTS production outnumbering the GTB version almost five to one. The early part of the series was numbered in the Ferrari odd number road car chassis sequence, and later examples (post chassis number 75000) in the continuous number sequence.

The front and rear suspension are independent, double wishbones, with coil springs, telescopic dampers, and anti-roll bars. The steering is rack and pinion. The transmission is a 5-speed manual.

Top speed was 157 mph (253 km/h) and 0-60 took less than 6 seconds. The only visual differences between these two-litre Turbo's and regular 328's were their NACA ducts positioned just in front of each rear wheelarch, redesigned engine covers (in order to accommodate the Behr intercooler) and a ventilated rear bumper.