In 1982, turbo-charging and fuel injection increased power output to 220 bhp (164 kW), but initially only available in GTB form; the GTS turbo was introduced in 1983. In 1985, small body-style modifications were made, in-line with the introduction of the 328; production ended in 1986 after 437 GTB turbo and 250 GTS turbo cars were produced. 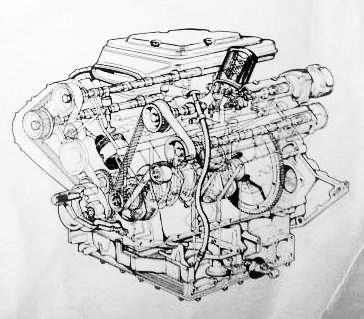 Among the typically yearly updates to the performance and style of the 308 throughout its run, cars from the same series would have a number of differences between them depending on their intended export market (which is usual for European cars). For example a 308 destined for the American market would sport much larger heavier bumpers and a slightly sturdier frame (and many other smaller details) in order to meet more stringent US road safety standards. American market cars also suffered a performance hit due to a compression ratio of 8.6:1 vs 9.2:1 for most of the rest of the world state emissions legislation which reduced horsepower. As a result of these differences there is often a premium paid for the "purer" European spec car over the federalized car.

Some differences between the Euro-spec and US-spec cars are shown below: