The Ferrari 550 Maranello and 550 Barchetta Pininfarina (Type F133) are 2-seat grand tourers built by Ferrari. Introduced in 1996, the 550 was an upmarket front-engined V12 coupe of the kind not seen since the Daytona. It shared its platform and 5.5 L (5474 cc) engine with the 2+2 456 (Engine Code: F133) but was positioned as the company's highest-end model. The car used a transaxle layout, with the 6-speed manual gearbox located at the back, in-line with the driven wheels. The model number refers to total engine displacement (5.5 litres) and the model name of Maranello refers to the town where the Ferrari headquarters are located.

The demise that same year of the F512 M left the company with only the exotic F50 and V8 F355 as mid-engined models. Although the 550 was a softer GT model, it did take the place of the F512 M as the company's upmarket coupe, discounting the F50.

The 550 featured a luxurious and roomy interior. The (rear) trunk was tall and wide, though not very deep, and could accept a full set of golf clubs or standard overnight bags. 3,083 units were produced.

The 550 Maranello has a tubular steel frame chassis with light aluminum bodywork bolted to it and 6-speed manual transmission. The steering is rack and pinion with variable power assist. The vented disc brakes are 330 mm (13.0 in) for the front and 310 mm (12.2 in) for the rear.

Ferrari introduced a convertible version of the 550 at the Paris Motor Show in 2000. This Barchetta Pininfarina was a true roadster with no real convertible top provided. The factory did provide a soft top, but it was intended only for temporary use as it was cautioned against using the top above 70 mph (110 km/h). A total of 448 Barchettas were produced, four more than initially planned due to concerns of superstition in the Japanese market. The 448 cars were preceded by 10 prototypes numbered P01–P10 on their interior plaques. To an observer the prototypes and production cars are indistinguishable.

The 550-based Ferrari Rossa was introduced at the 2000 Turin Motor Show to celebrate the 70th anniversary of Pininfarina. Designed by Ken Okuyama at Pininfarina.

On October 28, 2009, Zagato and Ferrari revealed that they have been working on a drophead version of the GTZ to celebrate the 90th anniversary of the long collaboration between the two Italian establishments. The roadster GTZ is limited to five units and based on the 550 Barchetta Pininfarina. All five have been sold at the stratospheric price of £1 million (€1.1 million/ US$1.6 million) each.

Although not intended for motorsport, some privateer teams took it upon themselves to develop the 550 for use in various series. The first racing 550 was built for Red Racing to comply with FIA sporting regulations. Italtecnica aided in the development of the project. The car was termed a 550 GT and was first tested in April 1999. It was used in the FFSA GT Championship in France from the end of 1999 until the end of 2000. The car was then sold to XL Racing in 2001 who continued to develop the car. The 550 GT made one of its final appearances at the 2003 24 Hours of Le Mans. In 2000, Italtecnica would create another 550 race car meeting the more powerful GT regulations in the FIA GT Championship, but the car was short lived.

In 2001, Prodrive built racing customer versions of the 550 for various sports car series and especially the 24 Hours of Le Mans. However, although this brought the Ferrari name into the sport, the cars would be built entirely by Prodrive without any support from the Ferrari factory. Named the 550-GTS, a total of ten cars would be built over the next four years and campaigned by the Prodrive team as well as privateer customers.

The factory Prodrive team would win two FIA GT Championship races in the cars debut in late 2001. The BMS Scuderia Italia team would take over in FIA GT, recording four wins, while the Prodrive squad would take a single win the American Le Mans Series. 2003 would be the best year for the cars, as Prodrive won the GTS class at the 24 Hours of Le Mans, took second in the GTS class championship in the American Le Mans Series with four wins, and Scuderia Italia won the FIA GT championship with eight wins.

BMS Scuderia Italia would again take the FIA GT Championship with five wins in 2004, while Larbre Compétition would take the GT1 class championship in the new Le Mans Series. BMS Scuderia Italia would then move to the Le Mans Series as well and take that championship for 2005. At the same time, Prodrive would move to their next project, the Aston Martin DBR9. All 550-GTSs would be maintained by Care Racing, and a few continue to be used today. Convers MenX used a 550-GTS in the 2007 24 Hours of Le Mans, while Hitotsuyama Racing runs one in the full Japan Le Mans Challenge season.

Following the success of the 550-GTS, Ferrari would adapt the 575M for racing and offer it as a customer car for privateers. Some road legal Ferrari 550s would also be modified by small teams for racing, although these differed from the Prodrive-built 550-GTS. 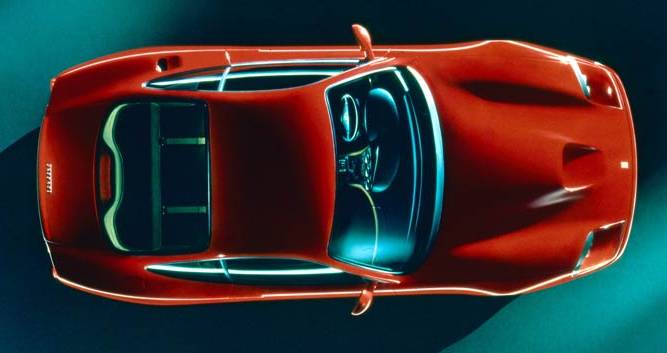