The Ferrari 212 Inter replaced Ferrari's successful 166 and 195 Inter grand tourers in 1951. Unveiled at the Brussels Motor Show that year, the 212 was an evolution of the 166 — a sports car for the road that could also win international races.

The chassis was similar to the 125 with double wishbones in front and live axle in back. Coachbuilders included Carrozzeria Touring, Ghia, Vignale, and now Pinin Farina. The latter was an important move for the company, as Farina was already well-known and adding his styling skills would be a tremendous boost for Maranello. However, Pinin Farina was as proud as Enzo Ferrari, and neither would go to the other to request business up to this point. A mutual meeting halfway between Maranello and Turin was the negotiated solution. First Ferrari to be bodied by Pinin Farina was 212 Inter Cabriolet, chassis no. 0177E.

The British magazine Autocar got hold of what they described as the first production model of the Ferrari 212 in 1950 and recorded a top speed of over 116 mph (187 km/h) and an acceleration time to 60 mph (96 km/h) of just 10.5 seconds. 100 mph (161 km/h) came up in 22.5 seconds, but the magazine noted that they were limited to 6,500 rpm out of respect for the newness and low mileage of the car they were using, which suggested that even better performance would be available from a fully "run in" car: as tested the 212 nevertheless outperformed any car that they had previously tested. This appears also to have been the Autocar team's first encounter with a five speed gear box.

A single 212 Inter, chassis no. 0223EL2, was fitted with the available "225" or 2.7 L Colombo V12, creating a unique model that would be properly referred to as a 225 Inter. This one-off model was given a fetching Giovanni Michelotti penned berlinetta body by Vignale. 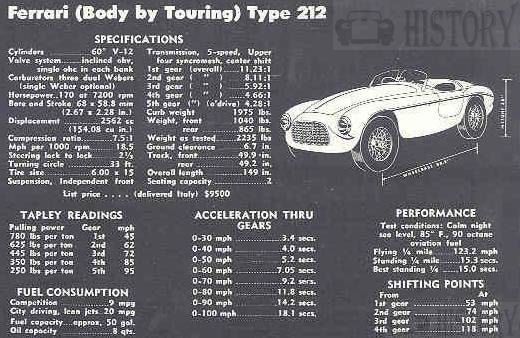