Fairthorpe Electron Minor .This duly appeared in 1958 as the Electron Minor, which used the same frame and bodyshell as Fairthorpe Electron, but was powered by a Standard Ten engine with its associated transmission, the engine being supplied in Alexander-tune (twin SU carburetor) 38bhp form. As with the Standard Ten/Pennant of the period, this power train was also optionally available with overdrive, and made an intriguing if somewhat crude mechanical combination of features.

Throughout the 1960s, and in to the 1970s, even, there was one or other version of the Electron Minor on sale from Fairthorpe, though the Electrina 2+2 fixed head coupe version did not last for long. In a busy, not to say frenetic, period of diversification, Fairthorpe also managed to make one more version of the same chassis/body design in the 1950s, which was the six cylinder Ford Zephyr-engined zeta. This unit was supplied with the Raymond Mays engine tune incorporating a non-standard cylinder head and multiple carburettors, for which the staggering output of 137bhp (gross) was claimed. The performance, in a straight line, certainly bore this out, though the car's refinement and comfort of riding left a lot to be desired. In this form, price listed incidentally until 1965, the Zeta was something of an amalgam of Fairthorpe, Ford and Triumph products, for there was a TR3 rigid back axle and Triumph front suspension, in addition to the Ford engine. In spite of all this performance, however, the Zeta was not a sales success, and the
gradually developed Electron Minor took most sales in the 1960s.

Note: Electrina was a fixed-head coupe, with 2+2 seating, in same basic style, and on Electron Minor chassis. 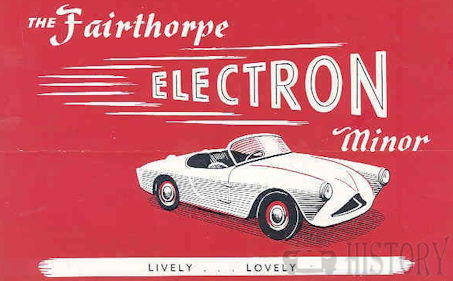