In 1956, however, Fairthorpe announced that they were ready to start selling Electron sports cars, which were indeed on the market by 1957. Like many other limited-production cars of their era, these sports cars had sturdy but unsophisticated tubular chassis frames, with proprietary front suspension components and back axles located by radius arms and suspended on coil springs. The rather unlovely two-seater open bodyshell was built from glass-fibre, which meant that minimum tooling was required. On the debit side, the body was by no means very refined, or well equipped.

The Electron had power by courtesy of Coventry-Climax (the ubiquitous F WA light-alloy unit of 1097cc), and there was a Moss gearbox. It was a very quick 'kit-car', but it was also quite expensive, and not many were sold after the end of the 1950s, when other derivatives of the same basic design were also on offer. Disc brakes were available from 1957, at which point the car became the Mark Il, and Electrons were still price listed until 1965. Clearly there was a need to market a much cheaper version of the basic design, 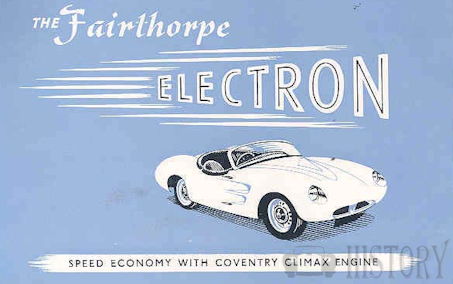