The 1994 JAC 427 Cobra is modeled after the '66 version of the Shelby Cobra that was a collaborative effort among Carroll Shelby, Ford Motor Co. and AC Bristol Cars of Britain.

Peter Reick, Excalibur president, says the company chose to build the '66 version of the Cobra because of the popularity of the 427-cubic-inch Ford, V-8 that replaced the first two engines offered in the car-260- and 289-cubic-inch, Ford V-8s.

Excalibur Cobra's most important feature, Reick says, is that you buy it built. An estimated 33 Cobra kit car makers sell about 2,000 reproductions each year at $6,000 to $15,000-cars that arrive in pieces for people to assemble or at least attempt to put together. But with Excalibur there's no need to bolt part A to part B in your spare time and, years later, realize you still can't find part B and no longer have any spare time.

"It can take you five years to build a kit car and when you're done there's no warranty," said Excalibur sales manager Richard Hohl.

"For the first time, an established auto manufacturer is supplying a fully certified, licensable, limited-production auto. The uncertainties involved in buying and completing a kit car are removed," Reick said. Record keeping from 1990 on was not the best at the Excalibur plant. 200 Excalibur Cobras was the target production number. However, there are no records to say what the exact production figures were. A few years ago, a survey was attempted to locate and document all the Excalibur Cobras produced. The highest Vin number found was number 172, thought to be very close to the end of the production run. So one could surmise that they never did reach their goal of 200 units. A more likely projection would be around 175. 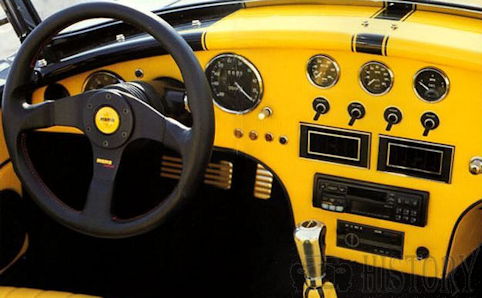