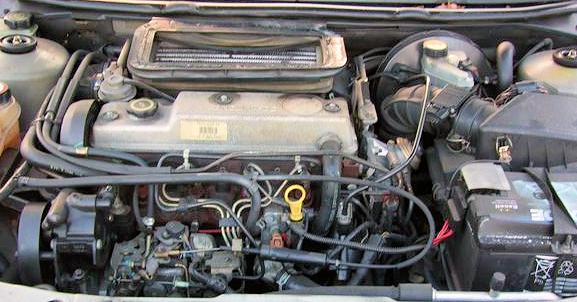 Turbo-diesel, also written as turbodiesel and turbo diesel refers to any diesel engine equipped with a turbocharger. Turbocharging is common in modern car and truck diesel engines to produce higher power outputs, lower emissions levels, improved efficiency from a similar capacity of engine Turbo-diesels in automobiles offer a higher refinement levels than their naturally aspirated counterparts.

The turbocharger was invented in the early 20th century by Alfred Büchi, a Swiss engineer and the head of diesel engine research at Gebruder Sulzer engine manufacturing company in Winterthur. Büchi specifically intended his device to be used on diesel engines. His patent of 1905 noted the efficiency improvements that a turbocharger could bring to diesel engines  which in 1922 had first been developed for use in road transportation

At the time metal and bearing technology was not sufficiently advanced to allow a practical turbocharger to be built. The first practical turbodiesels were marine engines fitted to two German passenger liners- the Danzig and the Preussen in 1923, each having two 10-cylinder engines of 2,500 horsepower (the naturally aspirated versions of the same engine produced 1,750 HP). By the late 1920s several diesel engine builders were making large turbodiesels for marine and stationary use such as Sulzer Bros., MAN, Daimler-Benz and Paxman

Turbocharger technology was improved greatly by developments during World War II and subsequent development of the gas turbine. It was now possible to use smaller turbochargers on smaller, higher-speed engines. Diesel locomotives with turbodiesels began appearing in the late 1940s and 1950s.

In 1951 MAN presented a turbocharged version of their MK26 truck, although it was never put into mass production.Series production of turbocharged diesel trucks commenced in 1954, when both MAN 750TL1 and Volvo Titan Turbo were introduced to the markets. The building of the Interstate Highway System in USA from 1956, made long-distance road transportation of goods more attractive and to keep up with general traffic more powerful engines came in increasing demand: Cummins, Detroit and CAT all had turbo-charging as an option by the late-1960s. In Europe, legislation was introduced in Germany mandating a minimum power-to-weight ratio for trucks; by the late 1960s a 38-tonne consist had to have at least 304 hp. Most manufacturers met these requirement with large-displacement natural aspiration engines, some with the option of large-displacement or turbo-charging, while Scania and Volvo where among those that only provided turbocharged trucks that met the demands. Turbo-charging was not preferred initially as the engines was perceived to be less reliable, but the method won a decisive victory by the mid-1970s as the 1973 oil crisis increased fuel costs. The last market to see the absolute penetration of turbo diesels was Japan, where legislation on particle emissions effectively mandated natural aspiration engines until effective particle filters became available.

Experiments with smaller turbodiesels of a size suitable for an automobile were carried out in the 1960s, the Rover Company (already a builder of industrial gas turbines) built experimental an 2.5 liter 4-cylinder turbodiesels (including versions with an intercooler) in 1963. The vehicles, however, were not put the design into production. The first turbodiesel production car was the Mercedes-Benz 300SD (series W116, engine OM617.950), introduced in May 1978, the first turbo-diesel Formula 1 racing car, a Renault 1,492 V^ producing 510 bhp having appeared in 1977. It used a Garrett AiResearch turbocharger, and was produced only for the United States. In Europe, the first turbodiesel was the Peugeot 604 in early 1979 (model year 1978). Turbodiesel cars began to be widely built and sold in Europe during the late 1980s and early 1990s, a trend that has continued to the present day.

Improvements in power, fuel economy and Noise, Vibration, and Harshness in both small- and large-capacity turbodiesels over the last decade have spurred their widespread adoption in certain markets, notably in Europe where they (as of 2006) make up over 50% of new car registrations. Turbodiesels are generally considered more flexible for automotive uses than naturally aspirated diesels, which have strong low-speed torque outputs but lack power at higher speeds. Turbodiesels can be designed to have a more acceptable spread of both power and torque over their speed range or, if being built for commercial use, can be designed to improve either torque or power at a given speed depending on the exact use. Naturally aspirated diesels, almost without exception, have a lower power output than a petrol engine of the same capacity whilst the same time requiring stronger (and thus heavier) internal components such as the pistons and crankshaft to withstand the greater stresses of the diesel engine's operating cycle. These factors give naturally aspirated diesels a poor power-to-weight ratio. Turbocharger units weigh very little but can offer significant power, torque and efficiency improvements—fitting a turbocharger can bring a diesel engine's power-to-weight ratio up to the same level as an equivalent petrol unit, making turbodiesels desirable for automotive use, where manufacturers aim for comparable power outputs and handling qualities across their range regardless of the type of power unit chosen.

Turbochargers are in many ways more suited to operation in diesel engines. The smaller speed range that Diesel engines work in (between 1000 and 5000 rpm for a private car, and as little as 1000-3500 rpm for a larger unit in a commercial vehicle) mean that the turbocharger has to change speed less, reducing turbo lag and improving efficiency. Diesel engines do not require dump valves (see the turbocharger article for more information). Perhaps most significantly, the diesel engine is immune from detonation because the fuel is not injected until the moment of combustion, so the compression ratio does not have to be reduced, or other anti-detonation measures taken, as would be necessary for a turbocharged spark-ignition engine.The turbodiesel engine can also help with the amount of torque it can give out. Commonly used in trucks, it helps improve the towing capacity of a truck, as well as fuel economy.