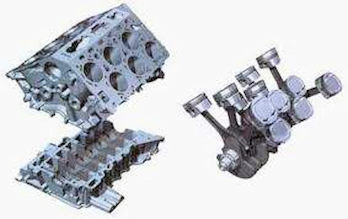 The Napier Lion was a broad arrow-style W12 engine produced by Napier at Acton, West London, from 1917 to the late 1930s. This mostly alloy engine had a capacity of 24 litres (1,465 cu in) and produced from 450 to 900 horsepower (336 to 671 kW; 456 to 912 PS). It was used in many racing cars by John Cobb and Malcolm Campbell, racing aircraft such as the Supermarine S.5 Schneider Cup winner, and speed boats such as Hubert Scott-Paine's Miss Britain III. This configuration had three separate four-cylinder banks, each at 60 degrees offset from one another, as opposed to the "double V" layout used by Volkswagen-Audi (VAG). Sunbeam tried the similar Kaffir, based on their Arab V8 engine.

Volkswagen Group currently produces W12 engines by forming two imaginary narrow-angle 15° VR6 engines at an angle of 72°. The narrow angle of each set of cylinders allows just two overhead camshafts to drive each pair of banks, so just four are needed in total. Note that this design differs from the W18 engine that Volkswagen Group produced for its Bugatti concept cars of 1998 and 1999. Due to this distinction, the Volkswagen Group's W12 engine is sometimes described as a "WR12".

The advantage of the W12 engine is its compact packaging, allowing Audi to build a 12-cylinder sedan with all-wheel drive, whereas a conventional V12 engine could only have a rear-wheel drive configuration as it would have no space in the engine bay for a differential and other components required to power the front wheels. The 6.0L W12 in the Audi A8L W12 (only offered in the long wheelbase models) is slightly smaller overall than the 4.2L V8 that powers the Audi A8 4.2 variants.

In the late 1980s, two W12 engines were designed and built for use in Formula One. In France, Guy Negre produced the MGN which had three banks of four cylinders offset so that each crankpin accommodated three connecting rods side-by-side. The MGN also had a novel system of cylindrical rotary valves located at the top of the combustion chambers, making the engine notably compact. The engine was tested in an AGS Formula One car, and in a Norma sports car, but never raced.

The other W12 Formula One engine was built in Italy by Life Racing Engines. The chief engineer for this project was Franco Rocchi, who had already designed and built an experimental 498 cubic centimetres (30.4 cu in) W3 engine when he was at Ferrari in 1967 as an investigation into the viability of a W18 F1 engine. Rocchi's W3 engine used a central master connecting rod, with a slave rod locating onto each side of the master rod, rather than directly onto the crank pin. This meant that there was no offset between the cylinders, and the crankpin did not have to be unusually long. A similar arrangement was employed for the Life W12 engine. Life Racing Engines failed to attract the interest of an existing team, so they acquired an F1 chassis which had been built for another team and tried to enter F1 on their own account in 1990. The engine proved to be unreliable and lacking in power.The car never qualified for a race.