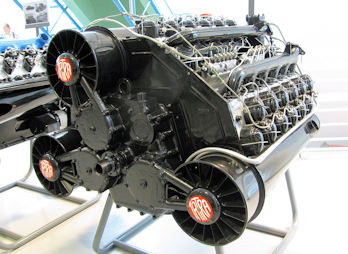 A W18 engine is an eighteen cylinder piston engine which usually has a single crankshaft with three banks of six cylinders arranged in an inverted broad arrow configuration.

In 1967, Scuderia Ferrari engineer Franco Rocchi built an experimental 65×50mm, 498 cc W3 engine, effectively a single crankpin module, in order to assess the potential for a 3-litre W18 Formula 1 engine. Although the engine developed 80 bhp at 11,000 rpm and 160 bhp per litre, the idea was abandoned. Subsequently in 1972 Formula 1 rules were changed to outlaw the use of engines with more than 12 cylinders. Rocchi used this module as the basis for a 3½ litre W12 engine for Life Racing Engines in 1988, although this was infamously unsuccessful.

The variation developed by Volkswagen retained the 18 cylinders but instead of three cylinder banks, it had four. This confused many who saw the specification in print at motor shows since 18 is not evenly divisible by four. The design was loosely based on the concept Volkswagen used for its V5 engines which had one bank with three cylinders and one bank with only two. Essentially the four-bank W18 was two V9 engines (one bank of five cylinders and one bank of four) mated to a common crankshaft. Ultimately the design proved to be impractical.