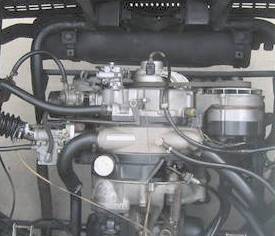 The Wankel engine is a type of internal combustion engine using an eccentric rotary design to convert pressure into a rotating motion instead of using reciprocating pistons. Its four-stroke cycle takes place in a space between the inside of an oval-like epitrochoid-shaped housing and a rotor that is similar in shape to a Reuleaux triangle but with sides that are somewhat flatter. The very compact Wankel engine delivers smooth high-rpm power. It is commonly called a rotary engine, though this name applies also to other completely different designs.

The engine was invented by German engineer Felix Wankel. He received his first patent for the engine in 1929, began development in the early 1950s at NSU, completing a working prototype in 1957. NSU then licensed the concept to companies around the world, which have continued to improve the design. It is the only internal combustion engine invented in the twentieth century to go into production.

In the racing world, Mazda has had substantial success with two-rotor, three-rotor, and four-rotor cars. Private racers have also had considerable success with stock and modified Mazda Wankel-engine cars.

The Mazda RX-7 has won more IMSA races in its class than any other model of automobile, with its one hundredth victory on September 2, 1990. Following that, the RX-7 won its class in the IMSA 24 Hours of Daytona race ten years in a row, starting in 1982. The RX7 won the IMSA Grand Touring Under Two Liter (GTU) championship each year from 1980 through 1987, inclusive.

Formula Mazda Racing features open-wheel race cars with Mazda Wankel engines, adaptable to both oval tracks and road courses, on several levels of competition. Since 1991, the professionally organized Star Mazda Series has been the most popular format for sponsors, spectators, and upward bound drivers. The engines are all built by one engine builder, certified to produce the prescribed power, and sealed to discourage tampering. They are in a relatively mild state of racing tune, so that they are extremely reliable and can go years between motor rebuilds.

The Malibu Grand Prix chain, similar in concept to commercial recreational kart racing tracks, operates several venues in the United States where a customer can purchase several laps around a track in a vehicle very similar to open wheel racing vehicles, but powered by a small Curtiss-Wright rotary engine.

In engines having more than two rotors, or two rotor race engines intended for high-rpm use, a multi-piece eccentric shaft may be used, allowing additional bearings between rotors. While this approach does increase the complexity of the eccentric shaft design, it has been used successfully in the Mazda's production three-rotor 20B-REW engine, as well as many low volume production race engines. The C-111-2 4 Rotor Mercedes-Benz eccentric shaft for the KE Serie 70, Typ DB M950 KE409 is made in one piece. Mercedes-Benz used split bearings.

In 1951, the German engineer Felix Wankel began development of the engine at NSU Motorenwerke AG, where he first conceived his rotary engine in 1954 (DKM 54, Drehkolbenmotor). The KKM 57 (the Wankel rotary engine, Kreiskolbenmotor) was constructed by NSU engineer Hanns Dieter Paschke in 1957 without the knowledge of Felix Wankel, who remarked "you have turned my race horse into a plow mare". The first working prototype DKM 54 was running on February 1, 1957 at the NSU research and development department Versuchsabteilung TX. It produced 21 horsepower; unlike modern Wankel engines, both the rotor and the housing rotated. In 1960 NSU (the firm the inventor worked for) and the US firm Curtiss-Wright signed an agreement where NSU would concentrate on the development of low and medium powered Wankel engines and Curtiss-Wright would develop high powered Wankel Engines, including aircraft engines of which Curtiss-Wright had decades of experience designing and producing.

Considerable effort went into designing rotary engines in the 1950s and 1960s. They were of particular interest because they were smooth and quiet running, and because of the reliability resulting from their simplicity. For a while, engineers faced what they called chattered marks and devil's scratches in the inner epitrochoid surface, they discovered that the origin was in the apex seals reaching a resonating vibration, and was solved by reducing the thickness and weight of apex seals. Another early problem of buildup of cracks in the stator surface was eliminated by installing the spark plugs in a separate metal piece instead of screwing it directly into the block. A later alternative solution to spark plug boss cooling was provided by variable coolant velocity scheme for water-cooled rotaries which has had widespread use and was patented by Curtiss-Wright, with the last-listed for better air-cooled engine spark plug boss cooling. These approaches did not require a high conductivity copper insert but did not preclude the use.

Also in Britain, Norton Motorcycles developed a Wankel rotary engine for motorcycles, based on the Sachs air-cooled Wankel that powered the DKW/Hercules W-2000 motorcycle, which was included in their Commander and F1; Suzuki also made a production motorcycle with a Wankel engine, the RE-5, where they used ferrotic alloy apex seals and an NSU rotor in a successful attempt to prolong the engine's life. In 1971 and 1972 Arctic Cat produced snowmobiles powered by 303 cc Wankel rotary engines manufactured by Sachs in Germany. Deere & Company designed a version that was capable of using a variety of fuels. The design was proposed as the power source for United States Marine Corps combat vehicles and other equipment in the late 1980

Mazda and NSU signed a study contract to develop the Wankel engine in 1961 and competed to bring the first Wankel powered automobile to market. Although Mazda produced an experimental Wankel that year, NSU was first with a Wankel automobile on sale, the sporty NSU Spider in 1964; Mazda countered with a display of two and four rotor Wankel engines at that year's Tokyo Motor Show. In 1967, NSU began production of a Wankel-engined luxury car, the Ro 80.However, problems with apex seal wear led to frequent engine failure, which led to large warranty costs for NSU, and curtailed further Wankel engine development

Mazda, however, claimed to have solved the apex seal problem, and was able to run test engines at high speed for 300 hours without failure.After years of development, Mazda's first Wankel engine car was the 1967 Cosmo 110S. The company followed with a number of Wankel ("rotary" in the company's terminology) vehicles, including a bus and a pickup truck. Customers often cited the cars' smoothness of operation. However, Mazda chose a method to comply with hydrocarbon emission standards that, while less expensive to produce, increased fuel consumption, just before a sharp rise in fuel prices. Mazda later abandoned the Wankel in most of their automotive designs, but continued using it in their RX-7 sports car until August 2002 (RX-7 importation for Canada ceased with only the 1993 year being sold. The USA ended with the 1994 model year with remaining unsold stock being carried over as the '1995' year.). The company normally used two-rotor designs, but the 1991 Eunos Cosmo used a twin-turbo three-rotor engine. In 2003, Mazda introduced the Renesis engine with the RX-8. The Renesis engine relocated the ports for exhaust and intake from the periphery of the rotary housing to the sides, allowing for larger overall ports, better airflow, and further power gains. Early Wankel engines had also side intake and exhaust ports, but the concept was abandoned because of carbon buildup in ports and side of rotor. The Renesis engine solved the problem by using a keystone scraper side seal, and approached the thermal distortion difficulties by adding some parts made of ceramic. The Renesis is capable of delivering 238 hp (177 kW) with better fuel economy, reliability, and environmental friendliness than previous Mazda rotary engines, all from a nominal 1.3 L displacement, however this was not enough to keep up with ever more stringent emissions standards. Mazda ceased production of their Wankel engine in 2012 after the engine failed to meet the Euro 5 emission standard.

Soviet automobile manufacturer AvtoVAZ also experimented with the use of Wankel engines in cars but without the benefit of a license. In 1974 they created a special engine design bureau, which in 1978 designed an engine designated as VAZ-311. In 1980, the company started delivering Wankel-powered VAZ-2106s (VAZ-411 engine with two-rotors) and Ladas, mostly to security services, of which about 200 were made. The next models were the VAZ-4132 and VAZ-415. Aviadvigatel, the Soviet aircraft engine design bureau, is known to have produced Wankel engines with electronic injection for aircraft and helicopters, though little specific information has surfaced.

Although many manufacturers licensed the design, including Citroën with their M35 and GS Birotor, using engines produced by Comotor, General Motors, which seems to have concluded that the Wankel engine was slightly more expensive to build than an equivalent reciprocating engine, although claiming having solved the fuel economy issue, but failed in obtaining acceptable exhaust emissions, and Mercedes-Benz which used it for their C111 concept car, only Mazda has produced Wankel engines in large numbers. American Motors (AMC) was so convinced "... that the rotary engine will play an important role as a powerplant for cars and trucks of the future....", according to Chairman Roy D. Chapin Jr., that the smallest U.S. automaker signed an agreement in February 1973, after a year's negotiations, to build Wankels for both passenger cars and Jeeps, as well as the right to sell any rotary engines it produces to other companies. The automaker's president, William Luneburg, did not expect dramatic development through 1980, but Gerald C. Meyers, AMC's vice-president of the Product (Engineering) Group, suggested that AMC would be buying the engines from Curtis-Wright before developing its own Wankel engines and predicted a total transition to rotary power by 1984. Plans called for the engine to be used in the AMC Pacer, but development was pushed back. American Motors designed the unique Pacer around the engine, even though by 1974, AMC had decided to buy the Wankel engines from GM instead of building them itself. Both GM and AMC confirmed the relationship would benefit in marketing the new engine, and AMC claimed that GM's Wankel achieved good fuel economy. However, GM's engines had not reached production when the Pacer was to hit the showrooms. Part of the demise of this feature was the 1973 oil crisis with rising fuel prices, and also concerns about proposed US emission standards legislation. General Motors did not succeed in having a Wankel engine meeting both the emission requirements and having good fuel economy, so in 1974 the company canceled its development, although GM claimed having solved the fuel economy problem and having obtained engines with a duration above 530,000 miles; unfortunately they just published a few papers on the results of their research. This meant the Pacer had to be reconfigured to house AMC's venerable AMC Straight-6 engine with rear-wheel drive.