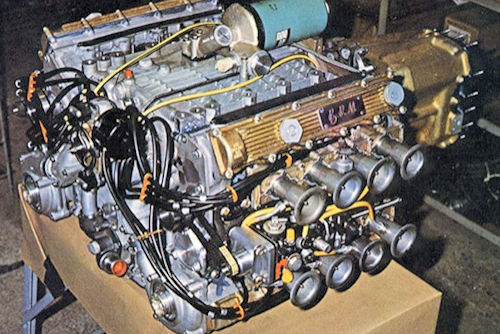 An H engine (or H-block) is an engine configuration in which the cylinders are aligned so that if viewed from the front, they appear to be in a vertical or horizontal letter H.

An H engine can be viewed as two flat engines, one atop or beside the other. The "two engines" each have their own crankshaft, which are then geared together at one end for power-take-off. The H configuration allows the building of multi-cylinder engines that are shorter than the alternatives, sometimes delivering advantages on aircraft. For race-car applications there is the disadvantage of a higher center of gravity, not only because one crankshaft is located atop the other, but also because the engine must be high enough off the ground to allow clearance underneath for a row of exhaust pipes. The power-to-weight ratio is not as good as simpler configurations employing one crankshaft. There is excellent mechanical balance, especially desirable and otherwise difficult to achieve in a four-cylinder engine.

Two straight engines can be similarly joined to provide a U engine.

The Japanese Subaru automobile company labels their horizontally opposed four-cylinder and six-cylinder engines as "H4" and "H6", respectively, though they are not H engines in the sense of the description above..

H engines in Formula One

Other uses of H term

Subaru produces water-cooled flat-four and flat-six "Horizontal" engines that are marketed as H4 and H6 (also thought to represent the configuration of the cylinders from a 'top down' POV as opposed to the traditional 'head-on' POV).