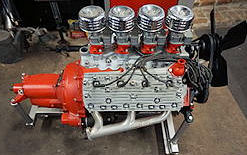 A flathead engine (aka sidevalve engine, flathead, or flatty) is an internal combustion engine with valves placed in the engine block beside the piston, instead of in the cylinder head, as in an overhead valve engine. As the cylinder cross-section has the shape of an upside-down L, other names such as L-block or L-head are also common.

The sidevalve's poppet valves are usually sited on one side of the cylinder(s). A recess in the cylinder head creates a corridor connecting the valves and the combustion chamber. The valve gear comprises a camshaft which operates the valves via simple tappets, without any further valvetrain paraphernalia (such as pushrods, rocker arms, overhead valves or overhead camshafts).

The sidevalve arrangement was once the most common across all motor industries (automotive, agricultural, marine, aviation, and others), but it has since fallen from favor in most multicylinder applications, such as automotive and aviation, having been displaced by overhead-valve designs. Flathead designs are still commonly built new for many small engine applications of one and two cylinders, such as lawnmowers, rotary tillers, and two-wheel tractors.

The main advantages of a sidevalve engine are simplicity, reliability, cheapness, compactness, responsive low-speed power, and ability to use low-octane fuel. The absence of a complicated valvetrain allows a compact engine that is cheap to manufacture. In particular, the cylinder head may be little more than a simple metal casting, and the simple valve gear engenders reliability. These advantages explain why overhead designs began their displacement of flathead designs in higher-cost, higher-performance applications (such as aircraft, luxury cars, and sports cars); only gradually worked their way into applications such as economy cars, trucking, and commercial agriculture; and still have not extensively displaced flatheads in applications such as lawn and garden equipment or subsistence agriculture.

An important benefit of the a sidevalve design is that, if a valve should drop, only limited damage would occur, and the engine might continue to operate with a broken valve. (By comparison, an OHV or OHC engine can suffer piston damage and catastrophic engine failure when a valve drops.) The design is intrinsically not an interference engine design, and provides safety from damage at high rpm.

Because intake and exhaust gases pass through the same corridor between the block and head, and because the light valve gear allows the valves to open and close quickly, flatheads are designed with minimal valve overlap (where both intake and exhaust valves are simultaneously open). This gives better low rpm performance than with OHV or OHC engines which use valve overlap to gain high rpm. Although a sidevalve engine can safely operate at high speed, its volumetric efficiency swiftly deteriorates, so that high power outputs are not feasible at speed.

The main disadvantages of a sidevalve engine are poor gas flow, poor combustion chamber shape, and low compression ratio, all of which result in a low power output.

The maximum compression ratio is low at about 7:1, reducing efficiency but permitting the vehicle to run on low-octane fuel.

The sidevalve configuration makes intake and exhaust gases follow a circuitous route, with low volumetric efficiency, or "poor breathing". High volumetric efficiency was less important for early cars because their engines rarely sustained extended high speeds; but designers seeking higher outputs had to abandon the sidevalve. A compromise used by Willys (Jeep), Rover and Rolls-Royce in the 1950s was the F-head (aka intake-over-exhaust configuration), in which there is one side valve and one overhead valve per cylinder.

An advance in flathead technology resulted from experimentation in the 1920s by Sir Harry Ricardo, who improved their efficiency after studying the gas-flow characteristics of sidevalve engines.The Ricardo head moved the exhaust valve farther from the center of the cylinder than the intake valve (whereas they had previously been equidistant). Ricardo observed how the form of the inlet and exhaust tracts affected gas flow and turbulence both in the inlet stream and within the combustion chamber.

Because the exhaust follows a complicated path to leave the engine, there is a tendency for the engine to overheat. In a T-head engine, a sidevalve engine has a crossflow configuration, so exhaust gases leave on the opposite side of the cylinder from the intake valve. American LaFrance powered their fire engines with T-head engines from the 1920s to the 1950s. The Cleveland Motorcycle Manufacturing Company produced a T-head four-cylinder in-line motorcycle engine in the 1920s; and early Stutz engines were T heads.

Flathead inline 4- and 6-cylinder engines were frequently used for automobiles, tractors, and other products from the beginning of the automotive industry until the 1960s, when overhead valve designs began to outnumber flathead designs in production numbers. Flathead designs are still commonly built new for applications such as lawnmowers, rotary tillers, two-wheel tractors, and other one- and two-cylinder equipment.

Some of the most famous automotive flathead engines were ones whose common nicknames reflected their flathead nature, such as the Ford flathead V8 engine and the Ford Sidevalve engine.

Due to cooling and efficiency problems, flathead engines fell out of favor in "high power" applications, such as aircraft engines, prior to World War I. However they lived on for some time in the automotive world and were used on the Jeep, for instance. Flatheads are no longer in common use for automobiles (except in some rodding and customizing circles), although they are still used for some small-engine applications like lawnmowers. Because of their design, the size of valves and the compression ratio are limited, which in turn reduces available power and economy.

A new arrival is the Belgian D-Motor LF26, a compact 2.5-litre flat-four aero-engine that has direct drive to a propeller, without any reduction gearbox.Dispensing with the complexity of an ohv valvetrain, the engine gives peak power of 80 bhp at only 2800 rpm. The resulting simplicity, lightness, compactness and reliability are ideal in an aero-engine. D-Motor is developing a 120 bhp 6-cylinder version.